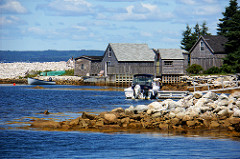 You are fishing on the bay,

your cigars and tobacco on the dining room table,

as I climb the steep russet stairs

painted aqua like motels in Florida, which she called

the state with the prettiest name. The quilt

is peach and rose and tan. There’s a tiny slate

her letters and numbers with delight,

especially her eights. The linoleum

and there’s chamber pot under a small white chair.

Her mother’s room is so close, just out the door

and to the left, the walls slanting in on both of them.

How did Elizabeth not bump her head

on the slope over her tiny bed? How did movers

get the bed into that tiny room? How did she go

from place to place, her mother’s scream

following her? How did she not scream

She was sure if anyone took scissors to the fabric

her mother married her father

when he was already terminal

and that explains his young death, since

there is no definitive story on how the couple met

in Massachusetts, her mother having left Great Village

for Worcester to work as a nurse.

I wouldn’t have thought of that, but it makes sense,

and in the next biography I read, a writer proposes

the same. You are the fiction writer,

I am the poet. I hope you are catching trout.

I am rereading Bishop’s “The Fish,” and I imagine

you are letting the creatures go as she did.

I sit on her bed then lie on it, and peer up

through the skylight she made famous

when she became a star-target.

There’s a curtain over it now since Elizabeth

nor anyone else has to get up at dawn

to mow the cemetery plots or walk the cow

to pasture up Scrabble Road—

that was after her mother went to the hospital

and never came back, and her Gammie and Pa

were thinking of chores to keep her busy.

and was known to have too much to drink.

She was never able to visit her mother

in the sanitarium. I wonder if that would have

When I was a kid,

my mother took me to see my grandmother

after her shock treatments. There was a duck pond

that I thought was for swans

because the place seemed otherworldly,

placid patients being wheeled to the water’s edge

by straight-backed nurses, their immaculate caps

like toy boats. The silence made it the perfect place

to sit in the grass and read, which I did.

I felt at home with the patients, just like the way

I feel at home in this house. My grandmother

wasn’t talking yet, but she would be soon.

She could eat broth, but nothing solid

since she missed her husband

and felt responsible for his death

because they’d had their worst fight the night before.

When she found him, he was slumped

near the sink on the floor. Maybe he was on his way

to get water to see if that would help him breathe.

Afterwards my grandmother walked around that spot

to do the dishes, or lifted one leg high in the air

as though she were climbing over his body, her other leg

following in a strange pantomime.

women would sometimes come to the hospital

diagnosed as having nervous breakdowns

when they were simply exhausted.

After a few days of being served trays of food

and watching TV, they were ready to go home

to take care of their families. Elizabeth’s mother

But, still, my mother’s story

made me less afraid of madness.

As a teenager, my grandmother’s stay at the sanitarium

all came back to me when I read Lady Sings the Blues.

was hard, but she has sunshine and sunglasses

and a white bathrobe and peace.

Or maybe that was Diana Ross in the movie.

To be alone and apart, even to get clean,

always seemed glamorous to me.

You and I sleep

in Gammie and Pa’s bed under two quilts.

We have stopped counting the number of beds

we’ve been in together, though

I am willing to start over again, the way

I made a timeline to see if, before we met,

we were ever in the same city at the same time,

if we could have passed each other on some street

in Pennsylvania or New York. You and I

travel and travel towards each other,

the travel something other than escape

from a scream. We have slept in beds

and Quebec. The comforters and pillows have been

I also love the number eight

two O’s really, one on top of another,

the way the two of us sleep under two quilts

even though it is May.

You are fishing on the bay

and I am missing you, but the missing

is necessary for me to go back to childhood,

where my grandmother can get better and then worse,

and in the end take too many pills

as did Elizabeth’s last real lover in Brazil.

haunted my mother, both of whom

Elizabeth was not so lucky

in love. But my mother was—

my father said there was no suicide note

and therefore no one was at fault.

Despite the empty bottle of Valium,

it was all a mistake, and my grandmother

was buried in a Catholic cemetery,

a rosary lacing her fingers, clasped over her chest.

She was lowered into the ground

next to her husband who I’m sure forgave her,

just the way I hope you’ll forgive me

if ever we have an awful fight.

Of course, I would rather we never quarrel at all.

Of course, I would rather death never do us part.

Of course, I would rather you get home soon

with your delicious salty smell and windburn.

Of course, I don’t know if seeing her mother again

would have even helped Elizabeth,

but in a poem anything can happen

so I introduce them,

sits down next to her mother’s wheelchair and reads

in the grass like I did. Since it’s Nova Scotia,

I throw in a pheasant and peahen.

Elizabeth and her mother delight in the colors.

Neither of them is afraid. Her mother has finally

let the seamstress make her a purple skirt

to replace her mourning clothes. Elizabeth

hears the real story of how her parents met.

Maybe it was at an ice skating rink,

figure eights. Maybe it was in a hospital,

their eyes locking as Gertrude pressed

a cold cloth to William’s forehead.

Whatever the story, Elizabeth

is enthralled by the romance

in the driveway and run to the door

then onto the porch to welcome you back.