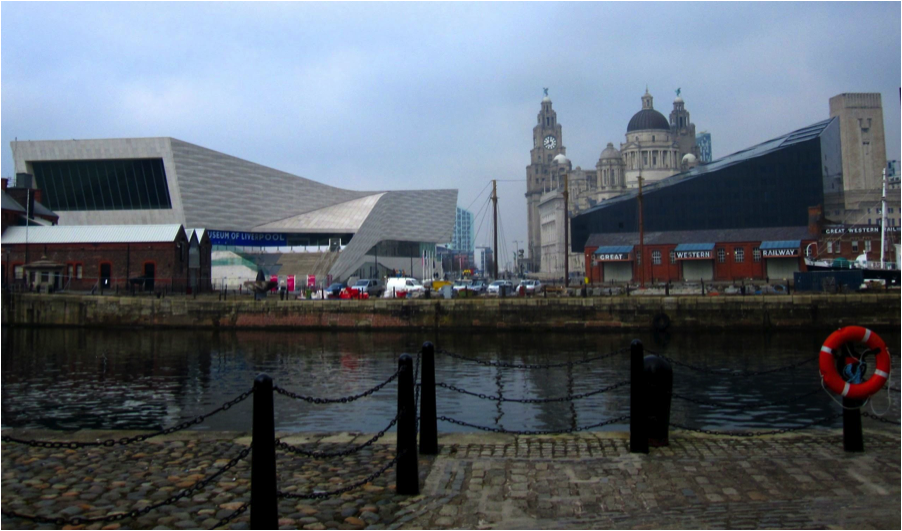 His friends ask us why we’d go to Liverpool. We don’t have an answer to give them and I forget the true one. We look at each other, shrug and say we’d heard it’s the most romantic city in the world.

The city slides on a slope. It’s disjointed and tilted—a sense likely exacerbated by the instant-coffee caffeine high, jetlag and bus fumes. The bus drops us at the top and we wind our way down to the straight, past a used bookstore with Gaelic flair, a Chinese vegetable market, two condemned movie theaters within three blocks of each other, and a restaurant with a We’re Open! sign on its boarded windows.

The air smells like northern salt water. Too much of my memory is of the cold and the wind.

A conglomerate of architectural trends greets us, seemingly accidental and impulsive, as if the city’s designers had a wandering eye for form and fashion. Plopped in the city is a Seattle Space Needle-esque radio tower, Neoclassical banks and libraries, and honeycomb-shaped apartment buildings adjacent the haunting Georgian town hall. A dark cathedral completed in the 1970’s looms over the city, protective or daunting, depending on the angle of the sun. The woman working there tells us in German not to go in the apex when the choir sings.

The pattern, as far as we can tell, begins with dark industrial bulk, then loss of demand for whatever resource it had been designed to commodify. What follows is a repurposing with a hint of gentrification: docks to commercial strips, mills to museums, condemned apartments to art studios. Charm (and subsequent profit) churned from demise, and a blatant appeals to us, the tourists, American at that, to check out the new and improved Liverpool and to spread the word.

We see curiously few references to the Beatles—perhaps intentionally, as if to say there’s more to here than them.

We down pints of Peroni and order eggs and beans for breakfast and dinner. The food is awful. He tells me I’ve never looked so Jewish as I do in a Liverpool pub. After the Tate, we happen into the slavery museum. Two-dozen kids in plaid uniforms sit cross-legged on the floor, lectured on the evils of slavery and wrongs of their country’s history like I’ve never been.

When we return, we tell his friends that the rumors are true, it is the most romantic city in the world (this time with less irony) and it’s certainly the strangest. One friend says, Did you ever think that maybe you and American cities are the strange ones? And we hadn’t.

Anna Hogeland is a clinical social worker and writer living in Boulder, Colorado.