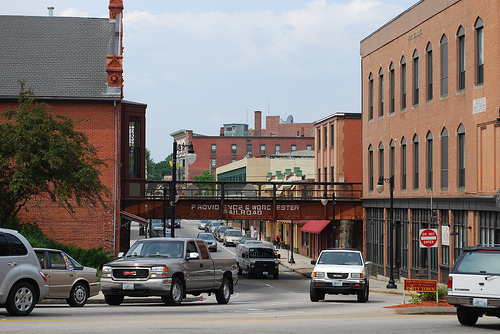 On the last day of the conference, we take a short bus ride to Woonsocket, Rhode Island, a sleepy town in the Blackstone Valley, just south of the Massachusetts state line. Situated along the Blackstone River and close to the Eastern Seaboard, the area was at the forefront of early American industry, powered first by water and later by steam. Today, a bright winter afternoon in February, snow melting underneath a clear uncurtained sky, the town center of slow-moving traffic and brick storefronts fringed with weathered canvas awnings has the distilled reverie of an elegy.

We have come to visit The Museum of Work and Culture, a tall red brick building walled with large steel-framed windows that was once a textile mill and is now dedicated to preserving the history of the French Canadians who immigrated to New England for factory work. It is an addendum of sorts to the tourist brochures championing the region as the birthplace of the American Industrial Revolution and our final stop in a long weekend of civic education run by the US. State Department. The participants are international Fulbright students completing graduate work in the United States—about 150 young, buoyant scholars from around the world who glide between languages and linger after each panel to ask questions of the speaker; they have come to the States to study things like financial algorithms and the development of artificial vision solutions for macular degeneration.

I am here as a Fulbright alum and conference volunteer, tasked with registering students and corralling them onto buses, chaperoning a small group dinner, and making sure that no one gets lost or left behind. My role is half-staff, half-participant, and though I have already discovered at this point in the conference that I am too easily overwhelmed by large groups of people to excel in either of these roles, which means I’ve spent much of the conference at a slight remove from the social networks forming around me, I can still feel the electric hum of genuine connection in the air, a pulse amongst people gathering throughout the conference—a tenuous thrill as charged and as fragile as an idea, lingering just below consciousness, promising to surface.

Inside the museum’s entrance, between a front desk where a museum worker entertains a lap dog and a large black and white a photograph of young female millworkers in long cotton dressers (hair pulled back and arms linked, faces blank), we are greeted by a jolly white-haired man who delivers a short prepared speech in French. The language is a symbolic gesture, a prelude to a discussion of the French-Canadian influence on daily life, but the students around me chatter back in a chorus of French imported from Africa, Europe, and the Caribbean, a new gang of friends, ready for conversation. The man hesitates for a moment, flustered, as if calculating the costs and benefits of revising his standard museum tour, before he switches to English. The story he tells us, alternating between historian and actor, is the tale of a people’s cultural identity being replaced by an identity as workers. We learn that French-Canadians were slow to assimilate, suspicious of labor unions, and dedicated to insular social institutions—French Canadian churches, schools, and neighborhoods—that maintained their communities but kept them isolated.

Though most of the students seem slightly weary of information and eager to return to their own conversations, they follow along through the exhibits good-naturedly, asking questions, staying alert. We see a replication of a cramped triple-decker—a three-family tenement home—listen to audio recordings from textile workers, and sit inside a parish classroom from the 1920s, complete with a life-sized statue of a nun and a priest and a chalkboard displaying lessons in English and in French and furnished with yearbooks and school photographs donated from the local community. We see a documentary about trade unions and their most successful tactics: a combination of skilled and unskilled workers, the use of solidarity strikes, and the integration of the union into multiple aspects of community life. The film ends with the rallying cry of an elderly woman, a former union organizer, asking how it is a person should position herself when attacked—she closes her fingers into a raised fist. There is a lesson being told about collective action and the methods by which a group of exploited people can assert their rights, but, fused to the modern-day realities of abandoned factories and industrial ghost towns, a worldwide garment industry that continues to employ young women and children in dangerous, low-wage working conditions, the appropriate modern-day response is, at least to me unclear.

Toward the end of the tour, in a room whose walls are marked with a timeline of US waves of immigration and related legislation, a pause between the tour guide’s presentations, we stop at a large world map under a glass-lidded table. A student from Argentina is surprised to see the islands along her country’s coast labeled as “The Malvinas Islands”; a student from Kazakhstan shows us the border region where he expects to be stationed when he returns home and is required to sign up for the military. Students point to the cities where they now live and to the cities they have come from and where soon, at the end of their programs, they will return. This is casual conversation, the measured small talk of just-made friends, but, after days of discussions about of civic leadership in a city swollen and decimated by industry, pro-labor slogans in my ears—a moment opens, and I see the scale of our geography beside the question of action, the plan we could gather between us and the distance it would travel.