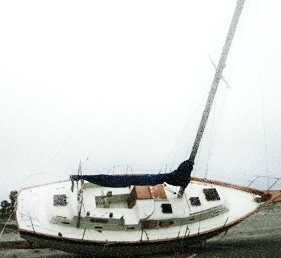 Three days of dirty weather and everyone saw it on their way home from work. It was dumped onto the Silver Strand State Beach parking lot— the keel naked and scabbed with barnacles, the mast canted. Someone said the park maintenance people must have hauled it up out of the surf. It looked like a forklift had punched two holes in the hull.

Some of us came from our homes across the highway to get a better look. We were the usuals who know each other because we walk our dogs: Butch’s mom, Lilly’s mom, Shamrock’s dad, all of us with our plastic bags tied to the handles of our leashes. Drugs, it must be drugs, someone said. Or immigrants. Illegals.

The Silver Strand is a narrow spit of sand running south from Coronado to Imperial Beach. Coronado is full of rich people who like cottages, or Navy people, like me, who landed here by accident. Imperial Beach is the last run-down beat-up beach town at the very last toe tip of Southern California before the border, Tijuana and the Baja beyond. Sometimes people come up on the beach from the other side. Once, a bail of marijuana washed up tied to a surfboard.

The state beach has an RV park, and some of the RV people came over with their dogs to look at the boat. It was the end of the weekend, all of it cold rain. When it rains, the Tijuana River lets go a brown flume nobody wants to swallow. It was too rough to surf, anyway; the last chaotic winter swell of the season blasted one roller after another onto the beach. It was a bust for the RV people that weekend.

From a few feet away, it looked like it might be a well-to-do yacht, thirty-some feet, nice and broad. But up close, all the fittings that should have been varnished had been painted to look like wood. Badly painted. The interior was a tangle of collapsed furniture, boxes, wood, splintered fiberglass, broken glass, broken boxes, torn insulation, ripped up cushions, a life jacket stuffed in a corner and what looked to be some old tools in the bilge— none of it any good. It had all the rigging of a sailboat, none of the sails. No propeller. It didn’t look like it had an engine. No anchor even.

The next day, someone put up yellow caution tape around it and nailed boards over the holes in the hull. A week later, a bunch of work-release guys in orange jumpsuits showed up with sledges and saws to take it apart. They threw the pieces in a dumpster and it was gone.

At sea, I’ve come upon these hollow shells filled with debris. Castoffs, most likely, the objects of insurance claims after a mooring loosed, an anchor chain slipped, the boat let go to drift alone, sometimes for years. They are hazards to navigation on the high seas, and we burn them. Sometimes they wash up. This one was named Moonstone. We don’t know who owned it, who sailed it or let it go— who left this dream abandoned here. 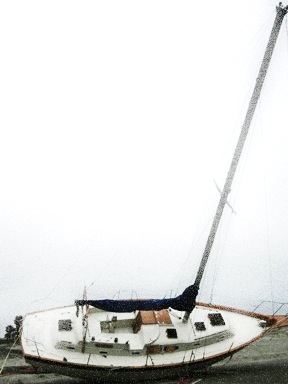 Rolf Albert Yngve short fiction has appeared or is forthcoming in Eclipse, Glimmer Train, Chattahoochee Review, War Literature and the Arts Journal and the Indiana Review where a story won the 2009 Indiana Fiction Prize. He retired from the Navy after 35 years active duty in 2006, recently completed an MFA in fiction from Warren Wilson, and finished his novel, Any Watch They Keep during a MacDowell Colony Fellowship. He lives in Coronado, California, with his spouse, Sharon Shelton, Captain USN (ret).