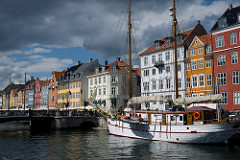 He taught me about empires, got spotted

in a ferry leaning almost too close to a man

in the same tee. People like us traveled a lot,

often with grist to unravel the abutments of risky

from a hetero shore to the less hetero soil.

It was science when a boat floated, so was

it when one sank, mass increased,

buoyancy gave in. His body knew it,

his liver a budded rival of his own

cells, pushing down the declivity every

historically healthy bit of him. I wished

despite the waves and noisy seagulls.

My fault of smattering when Reformation

began, what was reformed. Of finding radio-

He said his speech was unclear now, ball

point pens feckless, upside down in a mug,

unpaired. History not a mistake repeating but

a red smudgy rabbit stamp I once had for

recounting facts on time and exactly as he said.

The way he wrote Renaissance on the board was

so neat. I almost saw a straight line beneath.

Nicholas YB Wong received his MFA at the City University of Hong Kong and is a finalist of New Letters Poetry Award.