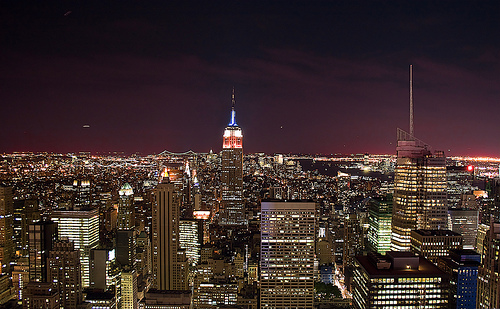 I write out those sentences (with apologies to Samuel Beckett) like a contorting pledge of allegiance: disillusioned and desirous. Or, as if the clarifying middle-ground will miraculously appear to me if I just keep repeating the polar opposites. Or because there is no middle ground but repetition could lead to a more complex form of understanding than mere acceptance.

But at night in New York City, acceptance seems more than mere. At night, the relative darkness lets me block out certain facets of the city; makes it easier for me to not see the outward manifestations of the ways in which the city has changed, the ways that challenge my affection for it. Lets that affection rise back up in me from the places in head and heart where I can’t help but keep it, even if it goes dormant for long periods of time, muscled down by stubborn, stern disapproval: this isn’t my city any more. Because walking at night, it can be.

At night, I walk into the city of my own past. Into the kind of walking that emptied me of a trying day, that was all about sense, not thought. Tonight, for instance, I walked from 84th and 2nd back to my hotel at 55th and Broadway, and while none of it had been my neighborhood, a lot of it was an old, favored path: upper Madison Avenue long after business hours, the sidewalks and streets quieted. As they were again tonight. The sidewalks—I allowed them to feel—all mine. Once in a while, someone else: a man walking a dog; a woman speaking Spanish into a cell phone; a well-turned out couple hailing a cab; two men in business suits speaking what sounded like Portuguese, their ties loosened. But mostly it was just me. My heels sounding out the rhythm of my stride: not too fast, but certain and steady. I was no longer leaning forward, as I do in the crowds of the daylit hours, muscling through an opening between people here, finding footing around a crowd there. My arms were swinging easily. My back was relaxed and straight. I took in what the shop windows offered as entertainment. I stopped to admire a fabulously beaded dress in shades of gray; a pair of iridescent, trippingly high-heeled and elegant shoes; an impossibly thin suede blouse; children’s clothes for no child I can imagine. I took none of it seriously but I enjoyed it all. I let the lit windows of apartments above the avenue flow together in the periphery of my gaze, like a reel of film slowed to its stills, or like the way one subway catching up to another flashes windows and moments of lives you won’t know, won’t need to in order to meet in that instant and leave in the next. Or I gave my gaze completely to the apartment windows, shades drawn or curtains open, empty except for light or showing movement through the light: a profile, a figure that might be staring back at me, or just staring. Bits of other people’s nights, the way my own might have been glimpsed from the street, from the other side of wide West End Avenue: my blinds almost always pulled up—who would see me five stories up? who would care to look if I didn’t care that they were looking?—my view into the night extending my one room apartment into an infinity of space: other uncurtained apartments, rooftops, cityscape, even a slice of sky. A world from that window sill, every inch of my life an inch of it as well, moving through it somehow, even without moving. Until: I needed to move out into it. Like I did tonight: into an avenue’s moving embrace. I remember how I loved this. I remember what I miss about it. I miss it.

My shoes are not meant for this kind of walking: long, strong strides for long blocks. By the time I reached my hotel, I’d walked nearly 80 blocks. Nearly 4 miles. The last block and a half was a march of will. I know I will have blisters by the morning. But that’s all right. I won’t want to do much walking then. It will be daylight, my arms will be up, my head lowered, ready to muscle through my disillusion and desire.

Karen Latuchie, author of The Honey Wall, has short stories published in The Paris Review, Southwest Review, Other Voices, Confrontation, and Gulf Coast.

Photo by Flickr Creative Commons user the camera is a toy.