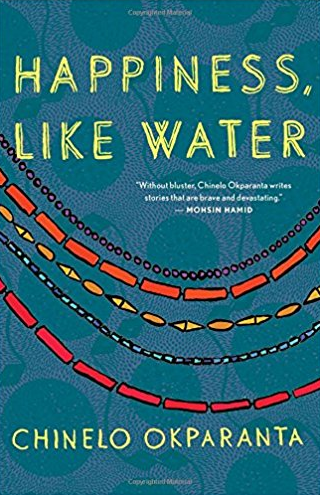 Happiness, Like Water is both an apt and a paradoxical title for Chinelo Okparanta’s debut collection. In these ten stories which deal primarily in the domestic, happiness is indeed essential and elusive, but it is neither clear nor cleansing. Many of the characters can only be happy at someone else’s expense: mothers who pressure their daughters to marry rich men or barren women who prey on pregnant ones, for example.

Okparanta dedicates the book to home. Home is the center of these stories, and whether in Nigeria or the U.S., it has the power to haunt. The protagonists are Nigerian women who find themselves on the edge of some great rift. Okparanta explores their descents, surrenders, and occasional elation using quiet language and unadorned structures. Her interior focus makes the high drama of midnight robberies, murderous “old maids,” and a virgin turned escort feel commonplace in comparison with the unyielding pressure, internal and external, facing these characters.

Okparanta’s family left Nigeria for the U.S. when she was ten, and the book is split between the two countries. Even in the stories that take place in Nigeria, the U.S. is omnipresent in the characters’ minds. Nigerian girls dream of the light skin they see in Cosmopolitan and long to leave the Niger Delta city of Port Harcourt, with its random power cuts and oil slicks, behind.

In America, Nnenna’s girlfriend, Gloria, has left Port Harcourt to work for an American university. The story follows Nnenna on her third trip to the U.S. Embassy to obtain a student visa. During the long bus ride, she looks out the window and watches children covered in oil play on the river bank. The sight of the children disturbs Nnenna and forces her to question her intention to leave and be reunited with her lover.

One day, Gloria tells her of an oil spill making headlines in the States. There have been “arresting camera shots of something like black clouds that would usually be clear and blue.” In Nigeria, where such spills happen regularly, oil clings to everything, killing life in the water and on the shore. Nnenna cannot fathom that this has happened in America, a place “where water formed a cold, feather-like substance called snow, which fell leisurely from the sky in winter. Pretty, like white lace.” A place with snow could not be ruined in that way.

Nnenna tells the man at the embassy about the children covered in oil. She says that a foreign education will allow her return and make Port Harcourt a cleaner place, less dark. She promises not to “get lost” in America, though she only says this so he will allow her to leave. She has no intention of coming back. Her visa is approved. The story ends with Nnenna voicing her misgivings: “Here I am running away from one disaster only to find myself in a place that might soon also begin to fall apart.”

Okparanta uses misperception throughout the collection: language, looks, intentions—you name it, everybody’s got it wrong. After several stories, there is a mounting dread that nothing means much at all.

Raised as a Jehovah’s Witness, Okparanta has thought a lot about the meaning of faith, marriage, culture, and sexuality, and the pressures they impose on women specifically.

She explores these ideas in On Ohaeto Street, the story of a first marriage told by a second husband. It opens at Maewood Estates: twelve bungalows with garages and fruit trees behind a wall topped with shards of glass. Outside, vendors sell tinned sardines. Cops and crooks saunter on streets lined with small shops. The as-yet-unnamed narrator tells us Chinwe’s mother had wanted the couple to marry and then to move to this upscale neighborhood.

We flash back to Chinwe and her mother sitting on the steps of their flat on Ohaeto Street; Chinwe is talking about her day as a teacher. She likes how the children wear her out. Up the road comes Eze, a man with a black briefcase on a mission to spread the good word. This ominous set-up, executed deftly by Okparanta, is reminiscent of Flannery O’Connor’s Good Country People. A mother and daughter are sitting on a porch, when suddenly a seemingly wholesome (holy) man arrives, carrying a valise, and promising some sort of salvation. (Both women are alumna of the Iowa Writers Workshop.)

Chinwe’s mother invites Eze to dinner. After several meals and Bible study sessions, the two are wed (the wedding dress is beautiful, but doesn’t quite fit), and Chinwe becomes a Jehovah’s Witness, though her mother does not.

Eze, an engineer, becomes ever more concerned with status and appearance. He grows cross with Chinwe if she doesn’t perform well at the Kingdom Hall meetings. He throws lavish parties to show off his new 505 SRS—the only car of its kind in the Rivers State, as he is fond of saying. At first this pleases Chinwe, but eventually it begins to trouble her that Eze, seemingly a good Witness, has become so materialistic. When robbers arrive in the middle of the night, drag the couple out of bed at gunpoint, and demand the car keys, his behavior shows Chinwe with a terrible clarity what Eze loves best—the 505 SRS. She decides to leave and return to Ohaeto Street.

But, we are told, it takes her a long time. In the last sentence of the story, we learn that our narrator is Chinwe’s second husband, whom she married without the influence of her mother. Our narrator seems very pleased that Chinwe chose him, but we get the feeling that for Chinwe choosing is illusory. The husband is central to the story, omnipresent. By telling the story for Chinwe, he makes it his.

Mothers and husbands make most of the decisions for the women in these stories. In Wahala, every time Ezienne makes love to her husband, she experiences great pain, and they are slow to conceive. Her mother convinces her to visit a dibia, a healer, to find out why. Ezinne wonders if Chibuzo doesn’t have the problem, but can’t voice such speculation. It is always the woman’s fault.

In Happiness, Like Water, the language often conveys a sense of muted violence, of events that already occurred and left their mark, for example, here in the simple description of a blouse. Ezinne observes:

the way the [dibia’s] age spots blemished her skin like dark stars on the surface of a light-coloured sky. She took in the seriousness of the dibia’s face, and the deep purple of the blouse the dibia wore, deep purple like a bruise.

A dinner party follows, to reassure the neighbors. That night, Chibuzo insists that they make love even though he knows it hurts Ezinne, saying the marriage will be null if no baby is forthcoming. He tells her to relax, and she does. In the throes of his own fantasies of fatherhood, he mistakes his wife’s moans of pain for pleasure. Listening at the door is Ezinne’s mother, and she too chooses to mishear. This story feels like a fairy tale or a creepy cautionary tale warning women of marrying age that the expectation to disregard pain to fulfill domestic obligations and duties may be enough to invite madness.

In Story! Story!, Nneoma, an unwed woman in her early 40s, occasionally poisons pregnant women she befriends at church, in the hopes of keeping their unborn babies alive for herself. It hasn’t worked. The babies die along with the mothers. But, every few years, Nneoma approaches a new woman, and tells her sad story, hoping to elicit an invitation to lunch.

Nneoma used to worship with her parents in their small village church, but once it became clear she was not to be married, she moved to the church on Rumuola Road, which is large, round, and two-tiered like a wedding cake. “This failure of her life to merge with her parents’ hopes, of it to merge with even her own hopes, was clearly not any fault of hers. She reasoned it this way, as if that settled it.”

The story opens with Nneoma sitting next to yet another pregnant woman and telling her the story of Ezioma: Ezioma and Nneoma taught at the same school. The two women have lunch one afternoon, and talk of marriage and husbands and children—which one has and the other wants. Then Ezioma goes missing. A few days later, Nneoma finds Ezioma dead in her bed, the baby dead in her belly. In the retelling, Nneoma leaves out the bit about how she prepared a special lunch for Ezioma from the recipie given to her by the dibia. She is distraught and weeps, seeking sympathy and an invitation.

Both stories in Story! Story! areas sensational as the title suggests, but Okparanta’s delivery saves them from feeling too obvious or contrived, a threshold that is approached a few times throughout the collection.

Ultimately, Nneoma decides against poisoning another woman. She refuses the proffered lunch date, but is filled with a deep-seated and desperate “hope that the woman would insist.” The reader, in turn, is left with the deep–seated fear that this story, all of these stories, exist in a place where hope itself is polluted and dark.

Okparanta’s simple prose gives an unnerving sense of dread to the stories inHappiness, Like Water. They are uncluttered and read quickly. But they resonate after you’ve left them and grow when you return to them.

If there’s a flaw in the book, it’s a tendancy toward oversimplification. For example, most of the men in the book have limited destinies. In the last story, Tumours and Butterflys, the father is unyielding, unkind, violent to his wife and daughter, and unchanging. After nine stories, the reader is practically rooting for the father to defy his typecast, and when he doesn’t, it’s a little disappointing. Images sometimes feel contrived: the wedding-cake church, the young immigrant who identifies with E.T., or the trash-strewn lots next to stately manors. While all of the stories are moving and suspenseful, the endings sometimes lack the heft of the work that precedes them, and one feels Okparanta could have pushed the language and the characters here to a higher plane, without losing the beautiful understatement that makes the book so quietly powerful.

Nicole Treska lives in New York City, where she teaches writing and media studies for the City University of New York. She has been published in The Coffin Factory and Moonshot Magazine, and was a recipient of the Jerome Foundation 2012 grant for Travel and Study in Fiction.