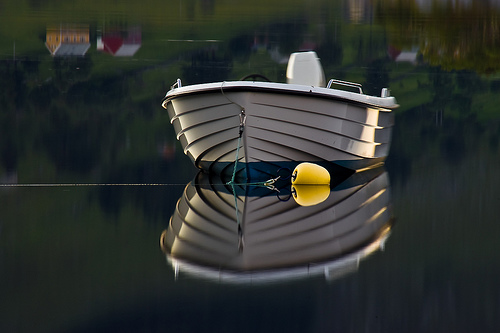 For this month’s poetry feature, we are publishing a collection of seven new poems by four The Common contributors.

between my toes and fingers, the slightest breeze

lifts me from the firmament thus, my lead shoes,

shoes of lead, breath of garlic, dick of old cheese,

I crumble at first blush with vavoom, really

my tail turns tail each time you enter a room

and gawk at me en plein-air, as the French say,

mais oui, I was born with a scut, like a whitetail,

my retractable fangs drip a delicate bane, but

nothing fatal, unfortunately, just a poison

that makes one sigh while listening to classic rock,

I sneeze in the rain, due to my nostrils-up beak

and so I spend most Aprils hiding my face

between my knees, playing “Adagio for Wings,”

under my serrated flappers, limpid membranes

that guide my melodies through spring’s torrents,

as a boy, I remember praying to St. Christopher,

that dog-headed cannibal, to help me secure

a date to the ball, instead I woke up covered

in albino spots from my frill to my lead shoes,

shoes of lead, breath of garlic, dick of old cheese,

brings me gossip from the next county over and oh

the awful things they’re saying about my eyes,

and it’s all true, my eyestalks are so dry

they flake when they gooseneck, when you come to me.

The first pig was made from twine and hay, clad
in a chaperon, crimson of course, I staked her

in my sheep lea to scare away the wolf, fat
chance, by dawn I was missing a pair of lambs

and the straw pig, to boot, I felt so crummy
I slaughtered my flock, rubbed their guts across

my neighbors’ doors and swapped the meat and wool
for a case of Genny Cream Ale and cherry schnapps,

I drank until my head split in two, after
I sewed myself together I built pig deux

from sticks and sinew, clad in a chaperon, scarlet
of course, I hung her from a birch to attract

the wolf so I could choke the aloof bastard but
I ate red pills and fell slow-asleep, by dawn

I was out one wooden pig, plus, the forest
was gone, I’m not a Jesus man per se, but I knew

my older brother, Father Iggy, kept a bullet
and a silver vial of dope behind his apse so

I sat and listened out his mass, blood into wine
into water as our savior walks across

a red sea on the backs of man-eating whales
and then it hit me like a ton of bricks, bricks,

his church was built from porker muck and clay,
days later, with the moon undercloud, I snuck back

and bonked the holy joe with my crook and made use
of enough blocks to arrange a pig, a hard oink,

clad in a chaperon and slurred with Iggy’s blood,
burgundy of course, I stood her with the old one’s

in the mostly Scots graveyard, as I holed up
under a cloud of horse the horned owls were singing,

the first pig was made from twine and hay, clad
in my sheep lea to scare away the wolf, fat

from sticks and sinew, clad in a chaperon, scarlet
chance, by dawn I was missing a pair of lambs

of course, I hung her from a birch to attract
a red sea on the backs of man-eating whales,

then I was shanghaied from my woolgathering
by an explosion of inanimate on animate,

that is, the church, weakened by my borrowings
had collapsed and by collapsing, offed the wolf

who had been drawn inside by the whiff of flesh,
I burrowed through the mess and found the cur

and slipped my dagger under his ribs and who
should pop out but Father brother, driveling

and doornail dumb to the world and my crook, like
Lazarus and like Lazarus the wolf transformed

back into my baby brother, the aloof bastard,
I ate red pills and fell wide-awake, by dawn

I was ready to plant him next to our mother
in the mostly Scots graveyard, as I holed up.

Peter Jay Shippy is the author of Thieves’ Latin, Alphaville, and How to Build the Ghost in Your Attic.

to the car when I’m surprised

by sounds I haven’t heard

for some time and can’t believe

of a woodcock broadcasting its call

from the fields beside this new Wal-Mart.

And then I see the male’s sloping

as it rises, no more than a speck now,

and the chirping circle it makes

at its apex, before it tumbles down,

I want to exclaim “Hark” out loud

in the middle of the parking lot,

with bags of mulch, but the bird,

rising up again, is barely visible

against the horizon of clouds

that could be, just now, English hills.

This display’s not for the guy driving off,

or for me, or anyone for that matter,

with spring inside him.  Besides,

what I’m seeing—and I can barely admit this—

would be a lot more spectacular

on one of those 1080HD Planet Earth shows.

Yet here I am, unable to turn away.

It’s late in the day, the parking lot’s rinsed

in twilight colors, and I’m trying to explain

why a bird I can hardly see

has cracked me open ever so slightly

as if, standing here, stopped

on the way to the car, I’ve been re-living

the memory of another place, long lost.

The wind that a boat experiences is the combination of the

a little while she sleeps, or a tilt of the light) and the wind

that occurs due to the forward motion of the boat. (The truth is relative

to the wind and stationery objects, but never to the boat). This combination

is the apparent wind, which is the relative velocity of the wind relative to the boat.

You are a boat. She is a boat. And the wind. You, apparently, are relative

to the forward motion of the boat. You were the wind or hips or

the truth sleeps in your mouth. When sailing upwind the apparent wind is greater

than the true wind, and she is the velocity.  You are relatively

the direction. When sailing, a boat experiences forward motion, lapses of

and/or appetite. You are a boat or a headache like a dial tone.

There is truth in forward motion. The wind is a mouth. She was the waiting

for a thunderclap. The velocity of the wind is the light, tilting.

A boat is a motion (i.e. an experience, a wind). You are waiting.

And she is the truth or thunder or a boat.

I am writing you from the future.

I was born a squalling mass of cells

as yet uncooked by hours on this earth,

and I’ve passed this place before—

this is the 27th year of birth, and here I am counting

in lapses, laps. I could have been more

the limber year, the hounded year,

There were other women. And I am so full of time—

sick with the minutes, there is a name

tugged between the two hemispheres

of my brain like carded wool. I had wanted

to keelhaul, to plunder. Numberless, the days,

the aspirins, the dimes, that I hoard to pile

at Enough’s altar. So many, the occasions I mistook

more for stronger, too many—and here I am counting

on the relevance of weights and measures.

Cate McLaughlin recently graduated with a MFA from Syracuse University. Her chapbook, The Year of Black Coffee, was published by the National Federation of State Poetry Societies.

Death is a pop-up, already on the screen.
So, what do you think, Pumpkin? Evergreen?

A man goes up into the mountains,
to a hot spring centuries old.
It is an off week in winter, so
he finds himself alone in a large
pool tucked against the river.
It is night. Soft lights
touch the shades of the inn that leans
out over the river. Looking up
through snowy branches at the stars,
he can’t tell where snow ends
and stars begin, and remembers
what he had read on the train:
this water flowing in, surrounding
him, lulling him, flowing out
again into the river, has traveled
a hundred years from the magma
to meet him. Here. Tonight.
He thinks about his grandparents,
dead now, but not even born
when this handful of water
(he cups a handful of water) started
climbing. About his mother and father,
still in school, this water still
coming. He pours the water back,
studies his pruned hand, and thinks
there’s a story in it, perhaps
a novel, or better yet, an epic
poem in which a man goes up
into the mountains, to a hot spring
centuries old, and finds himself
and the world in a handful of water.
There will be dates to check, facts
of world and family history to align,
a crash course in the water cycle.
Yes, he thinks. Seamless. Satisfied,
he rises, steps over the low wall,
and dips his feet into the icy
river, which he read on the train
is the done thing.