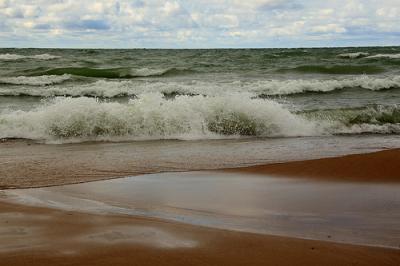 When we first moved to Ludington we spent days on the beach wandering along the sandy shores that stretched north to Manistee, south to Pentwater. Even in winter, when all the Fudgies (as tourists are known up north) had left town, having migrated to points south, we got out and hiked the hard-packed frozen beach, which provided a firm footing rather than the summer’s soft, fatiguing sand. But we had to cut against the strong gusts off Lake Michigan, and sometimes it was all we could do to walk upright, gripping our woolen caps over our red, nearly frostbitten ears. We spit grains of sand out and hunkered down, pushing against the wind. 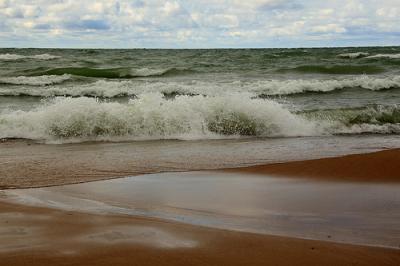 One afternoon we started at Stearns Park, the city beach near the water filtration plant, and hiked north to Epworth Heights, a conclave of turn-of-the-century cottages built on a bluff overlooking Lake Michigan to the west, and the Lincoln Hills Golf Club to the east. Justus Smith Stearns, a prominent Ludington businessman, had founded the Methodist Chautauqua-style family camping site in 1894. Today cottages have been handed down through family lines and Epworth is still known as a summer resort. Although the property is private, there was no one around that day to see us hike in and meander among the imposing old homes that had been boarded up for the winter. We were trespassing—just as we’d sometimes thought Epworthians had trespassed against us, stealing into the touristy town of Ludington. Once a thriving lumber community, Ludington could no longer rely on wood or Dow Chemical to prop up its economy; now it was a place hobbling on tourist dollars. In the summer, we sometimes tried to guess whom among the swell of visitors might have come from Epworth into the town to shop or eat – we tried to recognize them by their polo shirts – but we could never really tell.

After we walked through the narrow snow-covered streets like ghosts, we hiked down to the beach and walked south, back toward the city. Squalls off Lake Michigan hadn’t let up. Whitecaps crashed in on the beach. The sand was rock-hard and smooth beneath our feet, and not a single set of footprints, not even our own, could be seen in the windswept sand. We plowed on until we came to a mound, a swell the size of a large piece of driftwood, and as we stood over it we saw that it was the carcass of a partially-buried deer, its neck twisted back as though it had died trying to pull itself free—as if it were looking at us upside-down. Only its nose and one hoof protruded, the rest of it was draped with a tawny blanket of sand. We stopped, we stared. We took photographs. And then we went on.

As we struggled to make our way back, I kept thinking of a story I’d heard. A woman had told me that her boyfriend once saw a deer plunge into Lake Michigan and watched it paddle out toward the horizon, swimming farther and farther away from the shore until it had disappeared. “The deer drowned,” she said, “just like that.” She asked me if that wasn’t the damndest thing I’d ever heard. At the time, I hadn’t known what to say, but since then I have learned that it is not uncommon for injured deer to run toward the water. Why, no one seems to really know. Some say to quench a thirst; others, to let the cold water congeal a wound. Occasionally, hunters flush them out of the woods and, frightened, adrenaline on overdrive, they see the body of water – even when it flows all the way to the horizon – as an escape.

Debra S. Levy lives in Indiana and Michigan. She loves both places.