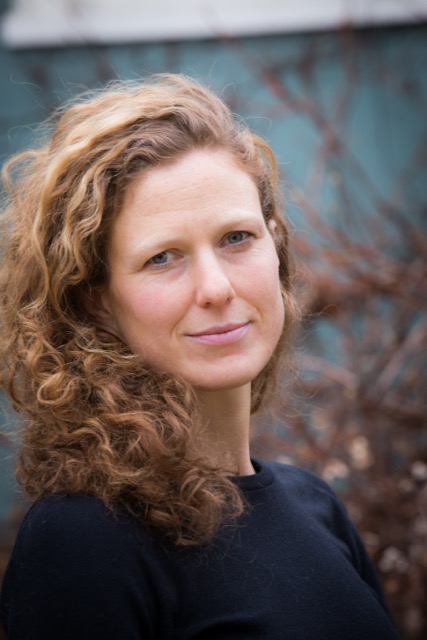 Kirstin Allio is the author of the short story collection Clothed, Female Figure and the novel Garner, a finalist for the Los Angeles Times Art Seidenbaum Award for First Fiction. Her latest novel, Buddhism for Western Children, will be the inaugural novel from The Iowa Review Series, a new imprint from University of Iowa Press, coming out in the fall of 2018. In this month’s interview, Kirstin Allio and The Common’s editorial assistant Isabel Meyers discuss motherhood, childhood memories, and society’s fascination with religious cults.

Isabel Meyers (IM): Your forthcoming novel, Buddhism for Western Children, deals with a young protagonist growing up in a cult-like community. What drew you to choose such an intense social dynamic and setting for your story?

Kirstin Allio (KA): Buddhism for Western Children is a story about power: a boy’s escape from a great force of a guru, a man-as-God.

It’s an old story, but colored by some of my own experiences too. I grew up in the wake of my parents’ spiritual searching, what felt to me like their breathless susceptibility to one self-conscious, countercultural group and guru after another. Imagine late ’70s-early ’80s self-styled self-righteous alienation: no TV, sometimes no school, bastardized Eastern religion, the fug of sandalwood, shared parenting, and brown rice. I’ve ended up stoking an enduring desire to understand, and chronicle, how people shape and navigate their communities. Buddhism for Western Children, is, to some degree, my own answers to my parents’ questions.

A cult is a microcosm, and so is a novel, with its own idiosyncratic coordinates, bounded by its own rules and even its own language. My first novel, Garner, tells the story of an insular, post-Puritan New Hampshire town in the 1920s, and the town postman, Willard, self-appointed arbiter of borders and morals. I see now how I was already working out an insidiously powerful guru-figure with a need to confine and control a community.

IM: You’ve written before about your family’s experience living under a charismatic religious master. What was the process of fictionalizing childhood memories like for you?

KA: I’ve written three long essays about my childhood, sometimes with a sense of investigative curiosity, sometimes out of anger, and sometimes in a kind of dialogue with my parents. (I’m very close to my parents, and you can imagine some dinner conversations!) Initially [the essays] were groundwork for the novel, but I’ve fallen in love with the essay form in its own right.

I began writing Buddhism for Western Children in 2005 with one phrase, the title. I had just finished splitting open another part of my childhood in my novel Garner, having to do with outsiders and sexual violence in small-town, red-state New Hampshire, and I suppose I had exercised a muscle of reckoning. I knew that I wanted to explore the childishness of religion as I’d experienced it in my parents’ childlike searching, when I myself was supposed to be a child. The title led me straight to a hotbed of very specific, almost lush memories, and in general a recounting of the ways in which children were isolated, and used, in the context of one spiritual community in California.

There are many passages that have remained intact, almost word-for-word, since 2005 or 06. What’s shapeshifted and taunted me over many years are choices about structure, and perspective.

Memory itself might well have been the first fiction. For me, memory is a muse and a catalyst, and there’s something essential and thrilling about metabolizing, distilling, and submitting memory to the form of fiction, where it takes on new layers, new life of its own. 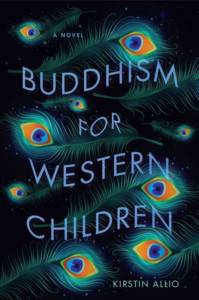 IM: There’s so much fascination in our society with mysterious and magnetic religious groups, whether through investigative journalism or reality TV shows. Why do you think we are so drawn to learning about these communities?

KA: This is such a good question, and also one I’ve avoided, for fear that the novel might seem cheap, or grasping at a lurid, topical voyeurism. Now that I’m in page proofs, I’m finally coming up for air and ready to tackle it. In fact, I’ve been taking notes for a new essay, so I’m going to keep my cards close, but I do think part of it is simply that cults are synonymous with sex! And oftentimes some kind of deviance—for example, both my fictional guru and one of his real-life prototypes have, or had, nine wives. Is it a stretch to speculate that there’s a whooshy, exhilarating evacuation—abdication of the self—which also has sexual overtones?

You didn’t ask, but the novel I most admire about cults—or utopias, or dystopias, I guess I’m bending the word cult now—is Coetzee’s Waiting for the Barbarians, because it shows, timelessly, our mainstream cult of fear and violence toward the Other. It’s a parable for the ages.

Finally, I suspect many of us are fascinated and perhaps titillated by our recurring susceptibility to sleek guru-forces in many different forms.

IM: In your short story in The Common, “Uncollected Territories,” you delve into the theme of motherhood, and the many complex ways mothers try (and fail) to relate to their children. It’s a relationship similar in intensity to the spiritual bonds described in the novel excerpt published in Guernica, “Named.” Do you see similarities in how you approach writing motherhood and how you approach writing about the worship of the guru in your latest book?

KA: Motherhood can certainly be devotional. And children can masquerade as tyrants, but I hadn’t made that connection before. I guess I think of mother-and-child as by far the more intimate, and complex relationship. In Buddhism for Western Children, it is the withdrawal, and the absence of the boy’s mother, that describes and indicts her. This is in contrast to “Uncollected Territories,” in which the narrator is defined by both her motherhood and her own mother. I wrote Buddhism for Western Children as I raised my sons, who are now seventeen and fourteen, and motherhood kept unfolding, adding new material and new tension. My relationship with my own mother—love, and our unresolvable arguments about Buddhism!—and the evolving sense of myself as an adult daughter also informed both the novel and the short story.

There’s another way, though, that Buddhism for Western Children and “Uncollected Territories” are related. Growing up with gurus has left me with a hair trigger for groupthink, and authority. There’s a crucial scene at the end of “Uncollected Territories” in which Sheila, the protagonist-mother, rebels against protocol at the dentist’s office. After a lot of coy back and forth, the hygienist finally forces Sheila to relinquish some medical history, precipitating middle-aged Sheila’s emotional revelation that she is no longer a child—she must find her own way in the world.

IM: One of the elements of your writing I most admire is the incredibly bizarre yet authentic way you describe human emotions. In the novel, for example, you show the power of the Guru by explaining “how worldly people coming into accidental contact with Him found their hearts spilled out through their bowels.” Does this narration style come naturally to you, and do you have any advice to writers who want to work on developing their own unique voice?

KA: This phrase about being a “noticer” is cropping up everywhere lately. Maybe because we are all sort of skimming across our own lives, as if we were in a rush to get to the end, with a premium placed on productivity—including downtime gazing on some kind of screen-borne information. I’m preaching! So as for advice: I’m pretty sure noticing, and describing, just comes down to patience and practice—taking notes over time on the inner and the outer world.

Kirstin Allio’s Buddhism for Western Children is forthcoming from University of Iowa Press in fall 2018.

Isabel Meyers is an editorial assistant for The Common.