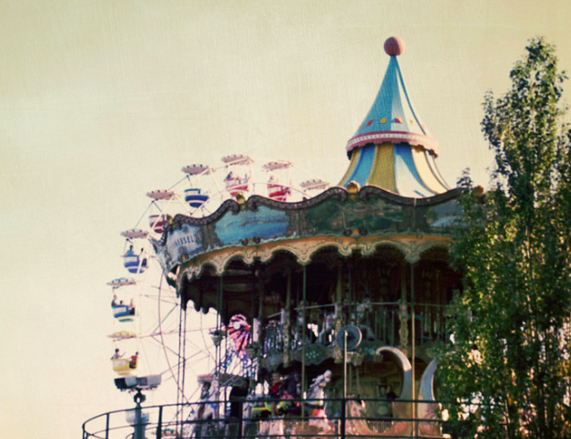 On the third morning of our vacation in Barjac, a small Southern French town, a car pulling a trailer bearing a plastic tiger, gorilla, and elephant drove around the square announcing a circus via megaphone. Delighted to see the French tradition of traveling circuses was resisting extinction, I dragged Zoë and Gabriel from the computer and my husband from his French horn. A blue plastic tent was set up in a field below the village. A llama, goat, and minuscule pony with a ground-sweeping mane grazed between the caravans.

What followed was extraordinary, not for razzle-dazzle or even tacky fun, but for the performers’ indifference to it. For ninety minutes, the MC, two blond women, and a man in a clown suit—sleepwalked through routines. There was no pretense at effort. The tickets had been sold. Who cared? Mlle Abigail, whose fishnets had a conspicuous hole, dropped her hula hoops. Mlle Sylvie fell off her (low) tightrope. The animals were equally blasé. Félix le Petit Chat wouldn’t cross his ladder. The goat slipped off his stools. The best gag was two sporting audience members who donned an elephant suit.

Mlle Abigail intrigued us most. She had a Slavic face and a strong but graceless body. “She looks as though she only got to the intermediate class,” my son Gabriel said. Walking home, we spun wild hypotheses. Was the circus a front for drug or theft rings? A real-life version of the Fellini film, La Strada, in which a young girl is sold to an abusive traveling strongman? Had Mlle Abigail been lured west by phony model ads? Circuses are always a little sinister. The illusion is the point. For our thirty Euros, we got one circus moment. Suspended from a rope, Mlle Abigail held her body taut, parallel to the floor, a feat of real strength, and smiled.

Julia Lichtblau’s work is forthcoming in the American Fiction 16 Prize anthology and has appeared in The American Scholar, Blackbird, The Drum, Superstition Review, Narrative, and The Florida Review, among other publications. She was a finalist for the Fall 2016 Narrative contest, one of two finalists for the 2015 Kore Press Short Fiction Contest, and twice finalist for the American Fiction Prize. She is the Book Reviews Editor for The Common, and covered international finance in New York and Paris for BusinessWeek and Dow Jones Newswires for 15 years. She has an MFA in Fiction from Bennington College and lives in Brooklyn, N.Y.