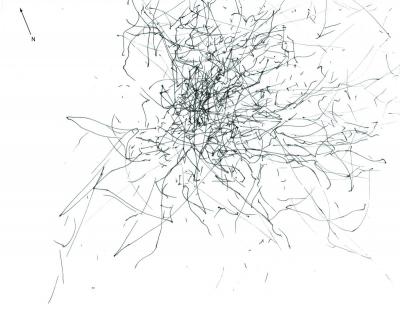 Matthews pens each of his drawings while standing waist-deep in the Atlantic or Pacific Ocean. He faces the horizon, maintaining his post for as long as fourteen hours, with his drawing paper nailed or stapled to plywood that floats on the water’s surface. It might not be surprising to learn that Matthews is a surfer and that his process was inspired by the hours he spent on his bodyboard, waiting for waves, while living in coastal Mexico between 2005 and 2008. The pieces shown here were created during a series of submersions in the Atlantic Ocean off the coast of England in 2010.

Matthews maps the ever-changing world of ocean and sky with an idiosyncratic language of sometimes dense and overlapping lines, arrows, dots, and swirls, combined with words and numbers. These symbols represent the transient currents and winds, the activity of seabirds, and the movements of the sun and moon. The ocean plays a part in the creation of its own portrait when the rolling waves make Matthews’s pen lurch across or stab into the paper’s surface or when the water spins the board, changing the orientation of the image. In addition, the saturating ocean water blurs the pen lines, and rust stains grow around the nails that secure the paper to the board. Once the paper is dry, salty creases contour the page. Matthews sees the physical fusion of his materials and his subject as central to his work. His drawings are not a mimetic replication of what he sees; rather, they convey an experience of spiritual communion or dialogue with the ocean, made possible by intense and prolonged observation.

Like Matthews, Bartow and Metzgar aim, in the pieces shown here, to portray the transient and subtle changes of the natural world over time. From 2009 to 2011, as part of a larger artistic study of the botanical and geological environment at the deCordova Sculpture Park and Museum in Lincoln, Massachusetts, Bartow and Metzgar made a series of fifty Tree Drawings.  To create these works, they suspended permanent markers on strings from tree branches over sheets of paper, allowing the trees to make marks on the pages. With the aid of these drawing prostheses, the trees were able to, in  effect, record their own atmospheric experiences, during sessions of one  to eight hours.

The forms created on the pages were subject to the speed and intensity of the wind and the strength and flexibility of the branches of various tree species. The compositions were also influenced more subtly by the effects of atmospheric conditions, such as the intensity of sun exposure, the level  of humidity, and the temperature. The contour, length, and strength of each line is indicative of the physical conditions under which it was created, but the highly varied lines are also suggestive of an expressive sense of mood. While some of the lines have a long, delicate, and flowing grace, perhaps created by an easily bending bough in a gentle breeze, others appear as truncated, repetitive digs into the page that imply a sense of frantic urgency, perhaps caused by a brisk wind and resistant branch.

Like Matthews, Bartow and Metzgar hoped to describe and understand a place and time through the extended recording of natural conditions. While Matthews’s creations can be seen as collaborations between the artist and the ocean, Bartow and Metzgar removed themselves from the process entirely, making the trees the primary creators of the drawings shown.

Although the practices of these artists, who venture into nature to observe and to document, are suggestive of science, the results of their research are purely artistic. By allowing a tree to stab at a piece of paper at random or an ocean wave to blur a pen line, the artists emphasize experiential knowledge and the element of chance over the scientific principles of accuracy and consistency. Matthews and Bartow and Metzgar limit their artistic control over what is produced, resulting in images that are evocative of the environments in which they were created but not necessarily informative about them.

Both series have a temporal quality, capturing specific, yet fleeting, sequences of environmental conditions that will never be repeated in exactly the same way. Casually observed, rolling waves and wind-blown trees can seem perpetual and unchanging, but the images shown here demonstrate the persistence of variety and change. In this way, these works teach us about perception and how much can be learned through close observation. Matthews draws a contrast between his authentic and direct experiences in the ocean and our increasingly virtual, Web-based world—a theme common to the work of many contemporary artists. Bartow and Metzgar perhaps take the idea of the firsthand encounter one step further by removing themselves as intermediaries, providing trees with a way to speak directly to the viewer. Essential to both projects is the idea that it takes both time and direct experience to learn about the world around us.

Peter Matthews Film Still Documenting the Artist Submerged in the Atlantic Ocean, England, During A Winter Storm in 2010

Bartow + Metzgar live and work in Upstate New York and began their collaborative practice in 1999.

Peter Matthews lives and works in London and recieved both a BA and an MFA from Nottingham Trent University.