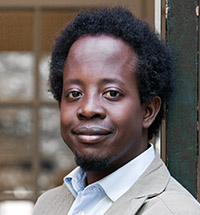 Rich Benjamin is a journalist-adventurer and the author of Searching for Whitopia: An Improbable Journey To The Heart Of White America. He is a senior fellow at the think tank Demos in New York City, and a frequent commentator on NPR, Fox News, The New York Times and many other media outlets. Melody Nixon caught up with Rich Benjamin this spring, at his office overlooking the Flatiron building in Manhattan.

Melody Nixon (MN): You’ve been described in the media as a “black journalist-adventurer?” Is that how you would choose to describe yourself?

Rich Benjamin (RB): I would definitely describe myself as a “journalist-adventurer.” I like to write about things that haven’t been written, and that require some form of mental and physical adventure. I don’t like to go on assumptions about what people think is going on. So I didn’t want to do an armchair sociology of white people in America. Instead I wanted to travel myself and learn about what I wanted to learn. There were some qualms from my perspective about being labeled “black” before “writer.”

MN: I was curious about that.

RB: You can’t do anything about that.

MN: So it was a designation by people writing press and blurbs for you?

RB: Absolutely. I would have preferred “journalist-adventurer,” because I don’t think black is the most important descriptor about me. But my editor and some journalists pointed out that, because race is central to this particular project, ‘we need to know that you’re black.’ This would be like a golfer reviewing a high-end set of golf clubs without informing her audience that she’s left-handed. Presumably the audience needs to know she’s left-handed to interpret the reviews. So I’m a little persuaded by that. But all things being equal I would’ve preferred not to be defined this way.

MN: Living on the East Coast and in New York City in particular I find it so easy to make assumptions about what is happening “out there,” in the rest of America, in terms of everything, but especially race relations. Your book offers rich insight as you actually travelled throughout the country investigating what you call “Whitopias.” What are Whitopias?

RB: There are a couple important, salient qualities of the communities I visited, which I call Whitopias. A Whitopia has to be whiter than the U.S. in general, i.e., right now the U.S. is about 69% white. A Whitopia has to be whiter than its respective region in the country, (east, south, west, Midwest), and it has to have had at least 6% growth between 2000 and 2008, and the majority of that growth has to have to come from white residents. And the final quality that is absolutely crucial to a Whitopia is that it has to have a special social charm, a je ne sais quoi, a special look and feel.

MN: In the book you came up with a few different names for describing these sorts of communities. I liked the poeticism of your term “Caucasian Arcadias.” Why did you settle on the term “Whitopia?”

RB: I wanted the reader to be immediately aware that we’re talking about utopias.

MN: Is that to give a sense of the impossibility, or false ideals, of these places?

RB: A little bit, yes, I agree. When you read Thomas More, when you think about utopias, they are genuinely, at face value, pleasant and positive. But there’s always a dark underlining to any form of utopia.

MN: Your introduction states: “a prediction that is making headlines across the U.S. is fast becoming a reality. By 2042, whites will no longer be the American majority.” Is this shift in demographics what inspired you to write the book?

RB: In general, yes. I was just fascinated by that statistic and the way it’s reported. In many instances in this country there’s an alarmist nature to the way that statistic is reported; it’s often frightening to readers. I jokingly call it the “white people deadline.” By 2042, white people’s majority status will expire. I just wanted to learn more about that, by going to white enclaves and seeing why there’s so much anxiety around that fact.

MN: Some of the people you talked to felt that they’d seen the “wrong model of diversity” in the urban centers from which they’d emigrated to new white enclaves. How much do you think these Whitopian communities are a response to race relations in American “failing” to progress since the Civil Rights Movement?

RB: I think one of the most memorable comments I heard was in St. George, Utah, from a woman coming from Los Angeles, who felt that in Los Angeles diversity had been done poorly. So for her diversity meant social strife, it meant graffiti, it meant gangs, it meant drug war. She said, very frankly, she’s “over it.” It meant also a form of multiculturalism she didn’t care for, that she felt was bullying and guilt tripping. So, yes, in many cases, people who’ve fled urban centers feel that diversity had been done badly.

MN: What was your “in” to people like her, to these communities?

RB: Hard work and pluck. In other words, I consider myself an extrovert, an extremely social person, so on my part there was a genuine desire to get to know people, to socialize full-time, to invite people into my rented home in the Whitopias, to accept all the invitations to Whitopian homes that I had been granted. And part of it comes down to work. In other words, to really research a community and understand who’s there, and use that as a means to immerse yourself more strategically and effectively.

MN: Did you ever fear for your physical safety? Or was being part of a community – someone familiar – a sort of protection?

RB: That’s a great question. I didn’t realize this until after the fact, but besides learning a great deal, the second benefit of immersing yourself thoroughly in a community is that it’s a form of protection and safety writ large. However you want to define protection and safety: physical, cultural, social, and all that. I never felt at all in physical danger. In some way, this is my country, these are my fellow country people, and even though I don’t pretend to be at all familiar with where I’m visiting, it is still my country.

The only instance I got nervous or skittish was when I was at a Christian Identity Aryan Nations conference, and I was the only non-Aryan journalist to have ever gone there, and I lost my keys as the conference was ending and the sun was about to set. I was nervous.

RB: Goodness. What would happen to me? How would I get home? Certainly they wouldn’t have hosted me. They’re unabashed white separatists. Which is to say, non-Aryans cannot inhabit their homes. What if people got drunk and an altercation developed? Just the sheer awkwardness made me nervous. The awkwardness of: “oh well, what will I do? I’ve lost my keys on your Aryan Nations compound.”

MN: Goodness indeed. Many of the places you visit in your travels are in the center of the country – Utah, North Idaho, Georgia – but you also visited Whitopian communities in Pennsylvania and New York. Here in New York I feel we’re led to believe that the coasts of the U.S. are more racially progressive than the center of the country. I’m curious, are there any real differences in the way that the coasts deal with race compared to the center?

RB: I don’t think that’s the case. I think the racial issues can differ in the center of the country, but I don’t think it’s better on the coast. It’s a different set of racial issues, and a different set of “race phobias.” I would never qualify it as better or worse. I’ve found in my experience is that there can be a level of self-satisfaction on the coasts that says they’ve handled their race related problems, I’ve come to find out that’s not the case. I’ve done some research here in Manhattan, where Whitopias exist.

MN: The discussion of the Upper East Side in your book is fascinating.

How did the communities you visited around the U.S. interact with the physical environments and landscapes they were in? Were there any defining features of place?

RB: Yes, absolutely. One of the qualities of Whitopias is just a gorgeous sense of place, where you might have mountains, or lakes, or rivers, bike trails, hiking paths, and this really contributes to the Whitopian allure. And who can blame someone for wanting that sense of place.

Another element of place and race I discovered is just the sheer pride that people had in being from a place for many generations. In other words, people from Utah, or Idaho, or Georgia, would say “my folks have been here for eight generations, for nine generations, my folks have settled here,” and they’d make these sharp distinctions between how long they’d been there and the newcomers – i.e., the new gentrifiers, the new money, especially the influx of people with money from places like Atlanta and California that might come into a Whitopia. So people were proud of place. And the place is often defined by the physical beauty of the landscape.

MN: Were you surprised by what you learned on this adventure?

MN: I imagine it’s a huge process to write up your findings after an adventure like this one. Did you change any of your ideas as you were writing the book?

RB: Yes, the structure, the content, all of that remained fluid until it was written up. The central idea of the book didn’t change but yes, yes, yes, the adventure took me to new avenues, and new realizations. 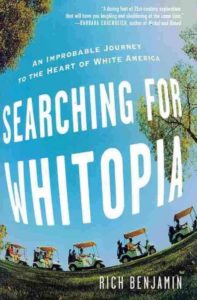 Rich Benjamin is the author of Searching for Whitopia: An Improbable Journey to the Heart of White America.