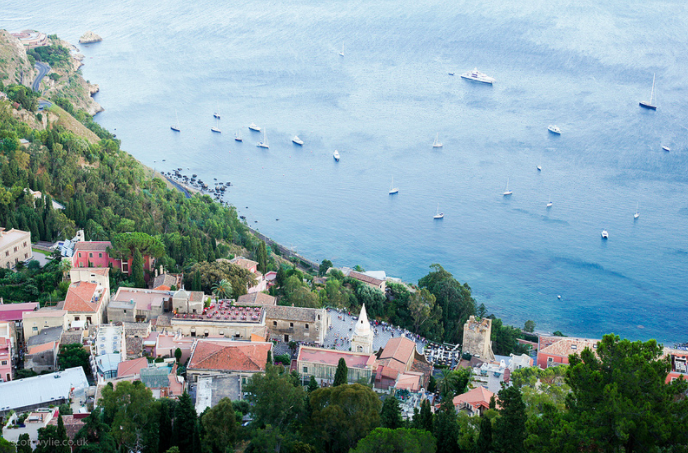 The hound’s teats scraped glittering white rocks as she hurried to us. She was followed by a lean buff-colored male, his coiled tail held high. We and our luggage were theirs to escort, seven of us climbing out of a Mercedes van: my husband, me, my daughter, two sons, and their girlfriends. The dogs nosed us towards a pair of stone steps. Underneath, two litters of puppies were occupying opposite corners, one litter busily suckling at their mother, the other—obviously the hound’s spotted puppies—were being poked at by little blond English children, who were squatting under the steps, too. The children began passing around the hound’s limp puppies, resting them on their bare knees. An elegant middle-aged woman came out, immediately addressing my husband in dialect. She pointed to the nursing dog: this one was a good mother. The hound, mala; she never let her dogs suckle. Just then our thirtyish host Emanuele emerged from the main entrance. He blushed when he shook hands with my daughter. Sneaking glances at her from behind aviator glasses, he said the Masseria and its surrounding estate had been in his mother’s family for seven hundred years.

The elegant lady went inside. She was not his mother, as we assumed, but the chambermaid.

In Sicily nothing is as it seems.

Emanuele brought us inside to the Sala Delli Botti, a medieval-looking hall. Through stone arches we could see huge barrels stacked against the cooling sandstone wall. One barrel alone could fit several standing men. Oil and wine were brought here by peasants, Emanuele said. He spoke as if the peasants had not been paying tribute.

He took us down tiered steps to the pool, the same sapphire as the sky, set in a cement platform jutting over the valley. Shadow clouds traveled fast over the valley’s floor, darkening clumps of swaying grasses, then releasing them back to brightness. Emanuele brought us a chilled bottle of Insolia, a white wine that left the taste of honey on the tongue. The nosy hound had come down too, and was digging around a grapevine espalier. She pulled out a gecko, neon green, and bit it in two. Emanuele pointed to a hodgepodge of shingled rooftops that clung to one mountain in the distance. “There is your late father’s birthplace.”

He said he would be glad to make phone calls to relatives and, now, he would see about the progress of our meal, a bite before dinner.

I raised my wine glass. “To the oppressor’s view.” My children and the girlfriends lifted glasses, uncomprehending. “Grandpa’s ancestors were the peasants, these people the landowners,” I explained. “And it wasn’t so far back.”

My husband ignored that. “Just think: Grandpa saw this magnificent view every day.”

The next day, we drove to San Giuseppe Jato, a town so grey and hemmed in it was like it was like it had given up trying to compete against the beauty of the valley, settling instead for dreary buildings that leaned toward each other over narrow cobblestoned streets.

As we drove by, sinister—or at least grim-looking—men sat in street cafes, looking at our van. My husband said, “It looks like Knickerbocker Avenue”, referring to the avenue in Bushwick where he’d grown up, a place famous for its Mafia wars.

We continued on to Trapani.

And so we began a series of daytrips, my husband bypassing Emanuele at the front desk and saying domani to the phone calls that Emanuele offered to make to locate long lost cousins.

Absorbing the Arabic architecture of Trapani, the white marble elegance of Palermo, its aquamarine bay, the painted fishing boats on the beach of Cefalu, the yellow marble Temple of Segesta arising out of thin air on a mountaintop: these were better uses of his time than struggling through conversations with distant relatives, my husband said. But he wasn’t actually struggling and he was doing a lot of talking. Wherever we went, Sicilians immediately addressed him, a six foot-four American, in dialect. He was giving off the ease of a native speaker like an odor.

On the last day driving back to the Masseria, my husband detoured into his father’s town. We headed up the main street, a vertical climb. A woman stood in the middle of the street, shouting up to a second floor window. We were stuck on the steep incline as she ignored our van. “Look at the ignorance. You see, this is what I can’t stand,” my husband said.

He backed the van down the narrow street. We left the town but couldn’t find the sign for the turnoff that led up the mountain. We circled repeatedly—no sign, no Google map here. It was getting dark.

A tall older man in a tweed jacket stood in a side street with a little dog. My husband leaped out to ask directions.

The man began to gesture. At first, it was the graceful hand movements, the plain gold wedding band, the too-long nails that seemed familiar. Then he turned to face us. And we knew why we were so quiet in the car, watching. The hairline, the noble forehead, the eyeglasses, the nose, the whole-hearted sincerity with which he gave directions, dipping his knees, making his hand zoom and turn. My husband got back in the car, excitedly explaining he now knew his mistake.

“That man looked just like Grandpa!” my oldest son blurted, amazed that his father was saying nothing about the eerie resemblance.

I leaned forward to look into my husband’s eyes. I felt my own tearing, but his were shining. He’d gotten what he came for, driving up the mountain into the dark.

Maura Candela’s debut fiction, “The Boy’s Club,” was featured in The Common 01. Her poetry has been included in Our Little Catastrophes, published by the Women’s Studio Center, Long Island City, New York. She has recently finished a novel called The Love Dogs, which is set in contemporary New York City where Maura herself is a native.