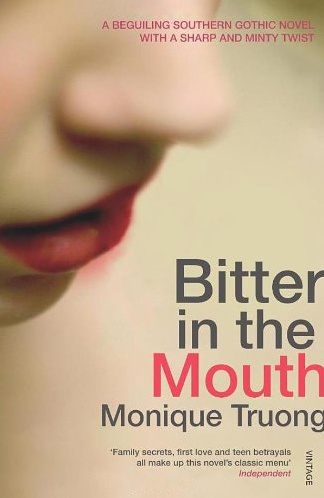 While parents often tell their children how unique they are, Linda Hammerick, the narrator of Monique Truong’s Bitter in the Mouth, truly is unique in an unexpected way. She has a particular form of synesthesia which expresses itself in the ability to taste words. As she explains, “When my teacher asked, ‘Linda, where did the English first settle in North Carolina?’ the question would come to me as ‘Lindamint, where did the Englishmaraschinocherry firstPepto-Bismol settlemustard in Northcheddarcheese Carolinacannedpeas?’” And yet, this fact of her life plays only a minor role in this novel about family and the discovery of one’s history. Truong, instead, focuses on family and how it defines you, the relationships between people, be they good, bad or some shade in between. It’s a story about the changes that people go through over a lifetime.

The story begins with Linda’s love for her great uncle, Harper, as well as her animosity towards certain other members of her family, particularly Iris, her grandmother, and DeAnn, her mother. The first section, “Confession,” flits back and forth from Linda’s childhood to her college years when she returns to her hometown of Boiling Springs, North Carolina, to her grandmother’s deathbed. Linda, as the narrator, is unafraid to shift around in time, to go from history to memory to present. In this section, Linda’s friendship with Kelly Powell is introduced, a friendship especially important in that she is the first person who is told of Linda’s talent and believes it: “The tiny miracle of our friendship was the question—What does that mean?—that was never asked.” Because of this friendship, it gives Linda the opportunity to explain her ability to function in the world with her particular affinity for tasting words. As a reader, I didn’t question Linda’s talent because the rules of Linda’s form of synesthesia are consistent and well thought out; the reader is taken along for the ride. This first section of the novel is where history, friendships and animosities are established. Or so the reader is led to believe.

Bitter in the Mouth is a novel full of unexpected twists and turns. Every time one thinks that Monique Truong has exhausted her material, the family drama, she reveals something surprising yet inevitable, some information that colors the way the reader sees the novel, casting it in an entirely new way. One unveiling of a mystery just leads to another; rather than the reader knowing more than the narrator, the narrator knows more than the reader, and she doles out information as she chooses.

It is at the end of the first section that the first major surprise appears, turning the reading of the book into an entirely different creature. As a reader, I found myself flipping back through the pages of the first section to see if there had been any hints before. None. But what need would there have been? It is upon this presumption that the novel becomes more than the sum of its parts. And then there are Iris’ dying words to Linda, “What I know about you, little girl, would break you in two.”

Indeed, there are many things that Linda does not know about herself. And it is this journey that readers are taken on in the rest of the novel. Linda, in the present of the story, is reflecting on her life and past as she returns home for the first time in many years, after the recent trauma of surgery and a cancelled engagement, for the death of her beloved great uncle. She no longer understands her own family and friends back in Boiling Springs, even her once-distant and hated mother; the drive of the novel is for Linda to see how people can change and how they have shaped each others’ pasts. This is a story concerned with other stories—Linda’s interest in the life and death of Virginia Dare, the mythology of fairy tales—they all play a part in Linda’s story as she tries to create a solid base off of which her own story can spring. Bitter in the Mouth is an expansive book; it touches upon life and death, issues of war and race, but ultimately, it is about one person’s search to understand how she and the people around her came to be the way they are.