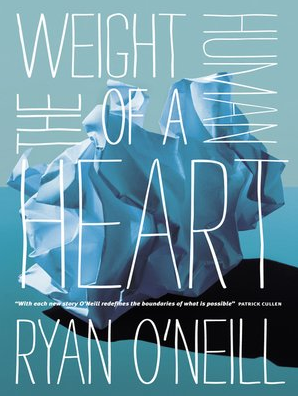 The Weight of the Human Heart, a short story collection by Ryan O’Neill, plays with language, cultural understandings, and misunderstandings. O’Neill, who was born in Glasgow and now lives in Australia, has traveled extensively, and this is reflected in the stories’ settings and in the characters, who seem to dwell on language as much as their author.

Language connects and disconnects in this collection. Married couples of different ethnicities struggle to translate their feelings; a woman paints phone messages on her naked body because her husband ignores her notes; even t-shirts with words are loaded. Two of the stories, “Understood, Understood, Understood,” and “The Chinese Lesson,” are about men, both language teachers, who use language to skirt their romantic relations. In “The Genocide,” one of the most poignant stories, a Rwandan woman, who had been severely injured during the massacres, will only speak in the present tense, “as if the past was too dangerous to touch, even with words.”

The twenty-one stories vary from straightforward narratives, many set in Rwanda, to what seem like writing exercises. Some of the latter are playful and clever, others gimmicky and contrived. Even in the narrative stories, O’Neill seems at heart more interested in language than in character, often leaving the reader at a loss to understand their actions.

In the first story, “Collected Stories,” the narrator is the daughter of an obsessive short story writer, aptly named Margaret Hately. Her father left before she was born. “I only knew him from the parts of him she put in her stories – a limp, a way of reading a newspaper at arm’s length. Whilst my mother wrote, my father was made of words.” The story is told in sections, each relating to one of the mother’s collections, as if the daughter’s life were a story collection. The mother, who is never without a pen and a cigarette weighs books on the kitchen scales before reading them. “Any book that weighs more than half a kilo isn’t worth the trouble, she said.”

The mother is negligent and narcissistic, yet the daughter clearly loved her – to a point. When, as a five-year-old, the narrator gave her mother a story she’d written for her birthday, the mother corrected the spelling and punctuation with a red pen. As a young woman, the daughter was even amused when her mother killed her repeatedly in stories. Eventually, she grows disgusted with her mother’s habit of measuring “people for a story as an undertaker might measure them for a coffin.”

Their break comes when the daughter goes to university to study medicine and marries an Aborigine artist she met when he was moonlighting in a tattoo parlor. She had gone there to get a misspelled tattoo to annoy her mother (he refused). After their marriage, her mother writes a collection so racist that no one will publish it and ruins her reputation and finances by self-publishing. Mother and daughter do not speak for nine years. But when the mother gets lung cancer, the daughter, now a doctor, nurses her.

The mother’s last collection – The Good Daughter And Other Stories – is published posthumously. The narrator’s husband buys the book, hoping his wife will read it. Instead, she weighs it. “‘It’s three hundred grams,’ I said. ‘The weight of a human heart.’” On top of the heart scene, this comes across as thematic overkill.

In “Four Letter Words,” an etymologist tells his story through the etymology of the swear words his father taught him: cock, fart, poof, tits, piss, slut, gook, fuck, and damn. The narrator’s father is a foul-mouthed drinker with a fondness for dirty magazines and all things scatological. Nevertheless, he has charm.

Each word represents a part of the narrator’s life. His father, a Scotsman, meets his mother while chasing a rooster, which he calls a cock. His misunderstood question: “Have you seen my cock?” gets him a bloody nose and a wife. Fart is largely about the narrator’s relationship with his father, who teaches the boy to speak Doric, a Scottish dialect, so that his mother cannot understand when they use “bad” words, which had earned him beatings with a dictionary. Piss details the father’s drinking, and gook is how his father refers to the narrator’s Vietnamese wife. This racist comment leads to estrangement, as in “Collected Stories.” The two are reunited when his father has a stroke that destroys the language-censorship part of his brain, essentially reducing his vocabulary to “fuck.” Through the father’s curses (and struggles), we paradoxically get a touching portrait of a family.

O’Neill’s African stories focus mainly on Rwandan genocides. The images are vivid and brutal. “The Cockroach” is told by a young Tutsi girl, who escapes a massacre after watching Hutu neighbors murder her father. Standing by a river filled with Tutsi bodies, the girl remembers that the river flows into Tanzania from a wooden map of Africa her father had carved. What triggers this life-saving memory? The Hutus refer to the Tutsis as cockroaches. She had once watched a cockroach fall off the map at this river.

As with “Collected Stories,” O’Neill repeats an arresting and troubling detail – the cockroach, in this case – at the end. After numerous Hutu cockroach references in songs and slurs, it comes across as heavy-handed, a shame as the ending is beautifully written:

The girl stood at the river’s edge. When she waded in, the water was cold, but she was no longer alone. She could feel the hands of the dead holding her afloat as she swam through the darkness.

In “Africa Was Children Crying,” the narrator, John Gilchrist, is crammed onto a crowded, sweltering bus inhaling red dust through a broken window. Sick with malaria, he gets off before his stop and rents a room from a man, who has four children, who disturb his attempts to sleep through the fevers. He catches the oldest girl, Ruth, “her little stomach distended with worms so that she seemed grotesquely pregnant,” stealing his picture of his wife. After her third miscarriage, the couple has taken time apart. Gilchrist slaps the girl, cutting her lip with his wedding ring. When the girl says he hurt her, the girl’s father beats her for lying. Gilchrist doesn’t intervene and viciously mimics her moaning. The next day, he goes to meet his wife in another town. But she is not there. He discovers via a newspaper article that the bus he left crashed, and his name is on the list of the dead. This strange story leaves the reader wondering: was Gilchrist always cruel and alienated or has Africa sucked the empathy out of him? He has, in a sense, died, but we are not sure how.

The less successful stories in the collection use graphs, doodles, lists, and charts. “A Story In Writing” breaks a story down into settings, protagonist, Homeric similes, anagrams, limericks, anachronisms, and more. “Tyypgraphyy,” about a teenager’s discovery of her dead mother’s secret (through a broken typewriter key), is tender, but would have been more effective and readable without the errors (although O’Neill would have had to change the premise).

In “The Examination,” a Tutsi student’s tragic story is revealed through an English exam, which begins with a series of humorous language mistakes. Then comes an essay question, asking him to describe a wedding. His entire family was massacred in a church at his brother’s wedding. Here, O’Neill succeeds in marrying his predilection for structural games with emotionally resonant narrative.

The last story, “The Eunuch in the Harem,” is one of the funniest. A literary critic, Peter Crawley, slams a poet in a review and then runs off with the poet’s wife. Blinded by love, Crawley fails to see what a terrible writer she is. He touts her career, ruining his own, and the poet murders him by shoving eight pages of one of his essays down his throat.

Crawley’s last book, “The Eunuch in the Harem,” comes out posthumously. A reviewer points out that Crawley took the title from a remark by writer Brendan Behan. “Critics are like eunuchs in a harem; they know how it’s done, they’ve seen it done every day, but they’re unable to do it themselves.” The reviewer states that while Crawley jokingly referred to himself as a eunuch, many women he encountered would beg to differ.

O’Neill is a talented, witty writer. The narrative stories are the strongest, though they tend to lack character development. The best of the formulaic stories, such as the excellent “Four Letter Words,” and “The Examination,” bring character to the fore. The collection shines when O’Neill is not being a trickster. He is definitely a writer to watch.

Karen Uhlmann‘s stories have appeared in Fiction Southeast, Southern Indiana Review, Enizagam and other magazines. She has an MFA from Bennington College.