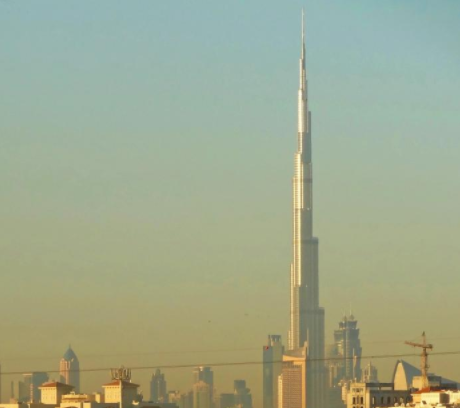 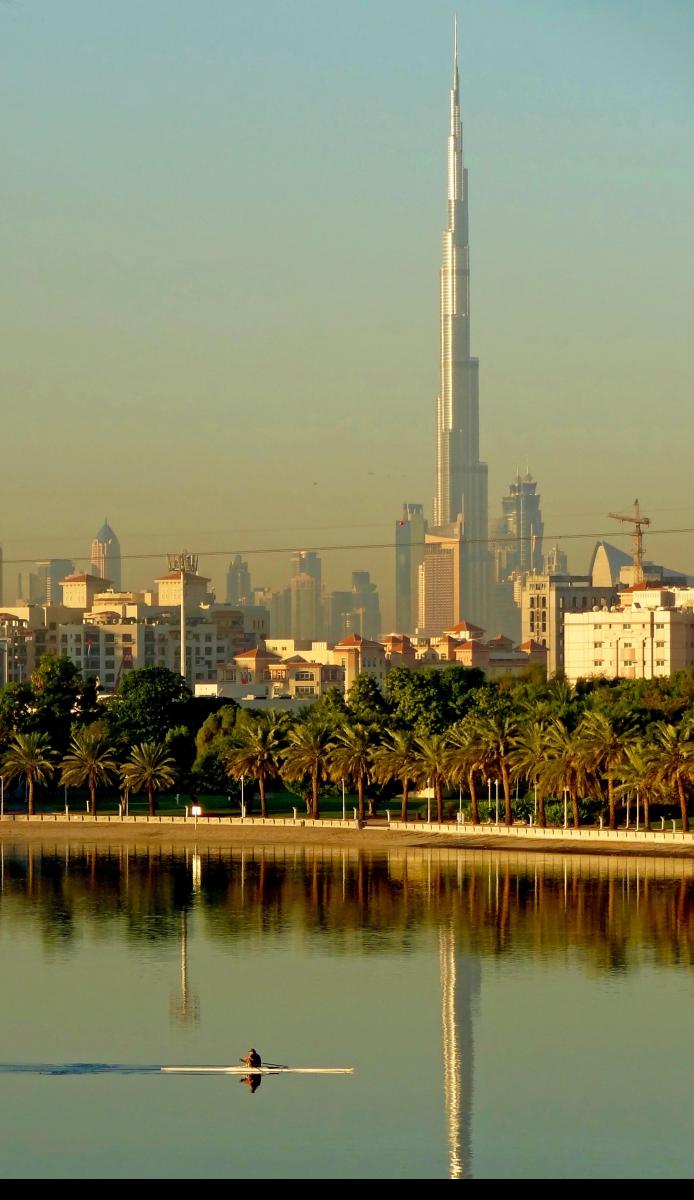 Every morning I sat on the terrace and waited for him. Night would fade to gray dawn, the sun’s first rays struck the kilometer-high spire of Burj Khalifa,and then the sculler would appear. No other craft plied Dubai Creek at that hour, no working dhows or party cruises. River belonged to sculler and sculler to his boat, and I would sit with my coffee and envy him.

I envied him because he rowed, a sport I had long wished to try, and because he lived in sunny Dubai while I would soon return to wintry Boston. It was an anniversary trip and my wife slept late each day, her internal clock reset to holiday time. She never saw the sculler and I did not mention him: envy of a life you do not have is best hidden from those who share the one you do.

On a July morning two years later, the Charles River was a placid mirror under clear blue skies—a perfect moment to be on the water, but I was not on the water, I was in it. I had finally stopped envying scullers and decided to become one, and had just been reminded, in no uncertain terms, that envy is blind to hardship. Floating beside me was the sleek boat from which I had fallen, its hull turned upward like a rejection of false assumptions.

As I stood there soaked to the chest, my feet booted in bottom muck, it soon occurred to me there were far worse things than an unplanned dip in a warm river on a summer day. I paused to observe the shore, whose geography I knew well from years of running by the Charles, but my present perspective, that of a goose or mallard, seemed vastly more intimate. I had lived in Boston for two decades while still rejecting the idea I belonged here, but later, when I thought how few Bostonians ever touch the waters of the Charles, much less swim in them, the sense of being an insider became hard to ignore. Baptism was too breathless and predictable a description for the feeling, but in retrospect, homecoming was not.

20 years earlier I had left New York, a place I loved, for a love of greater magnetism—the Boston woman who would sleep late in Dubai while I was out on the terrace. Such an uprooting assumes mere togetherness will make a home, but when that proves naive, it is not a failing of love but testimony to the power of place. New York was where my relatives and childhood recollections lived, where ancestors rested in cemeteries. Memories may be portable, but formation is bound to origin, and the problem is not so much going home again as not being able to leave it behind. Meanwhile one can live a long time in limbo, superficially adapting while inwardly refusing the smallest assimilation, an intransigence that does less to preserve identity than it does to make one miserable. It is also futile, because another power of place is that given enough time, almost anywhere will claim you to some degree. 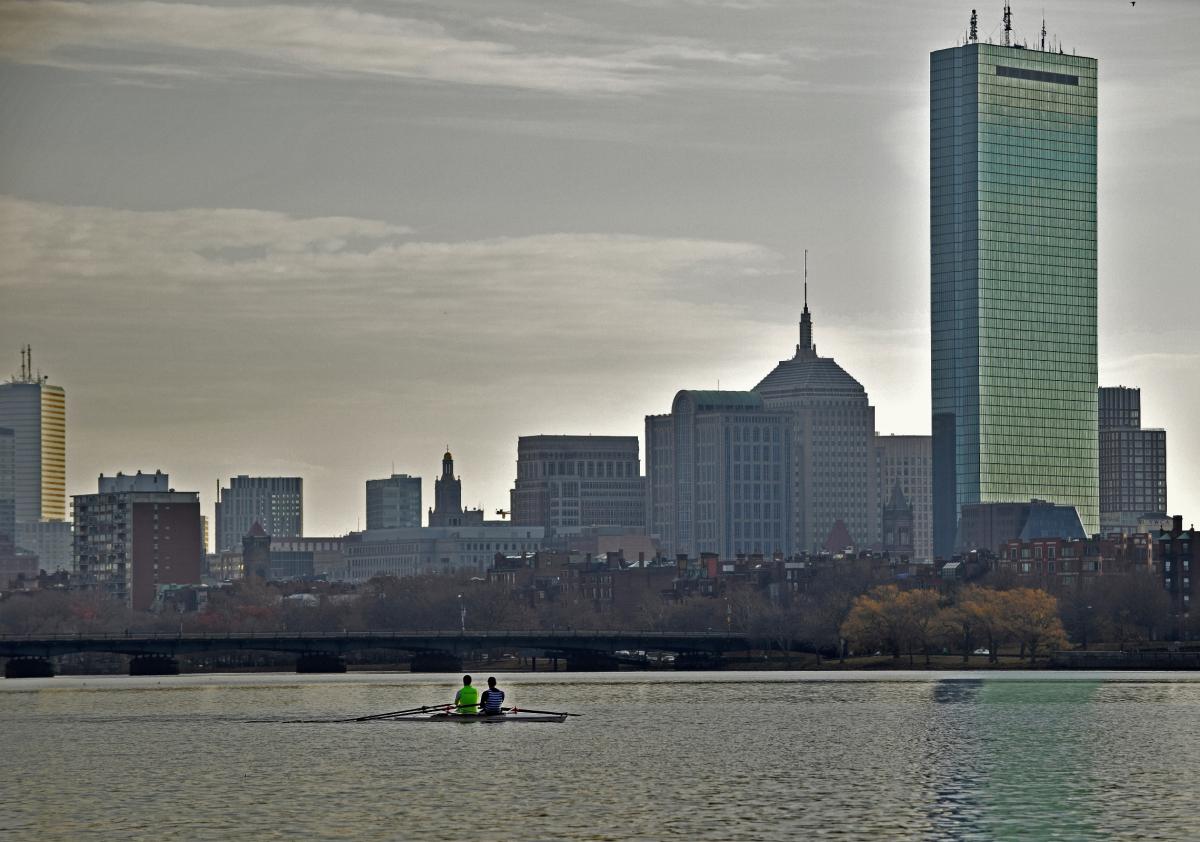 There is a short story by Mark Helprin called “Palais de Justice,” in which two rowers race each other on the Charles. I reread the story after I started rowing, and while I expected familiar words and landmarks, what I got instead was virtual reality. I had rowed under the same bridges the characters had, and navigated the same bends in between—this went beyond familiarity into participation, which reading, as a fully imaginative act, allows. You can never be an outsider again after you transform from observer to participant, and as I turned pages I was not reading in a chair but racing on the river—or to be more specific, my river.
Because that is how the Charles feels now—it has earned the possessive pronoun, which properly implies not the unilateral but the mutual: immersion, even when accidental, is a form of belonging. The morning I went overboard I was newly 53, an age several friends have failed to reach. I know they would gladly fall into a river if they could, which beyond a standard reminder to live in the moment, is also a caution against regret. “Why didn’t I begin sooner?” one might think, but the wish we had started earlier almost always comes with evidence we could not have. Countless factors conspire towards a particular moment, and to regret a beginning is to shortchange the experiences that enabled it. Rowing helped bring me home to where I had lived for 20 years, but those years were hardly wasted.

In The Great Gatsby, Fitzgerald closes with his timeless line about rowing against the current, but what he did not write, because he did not have to, is that a rower always faces where they have just been. On the Charles one day, I chatted with another sculler as we rested in a quiet cove, and because such a setting invites disclosure, both of us revealed we had been seriously ill at the onset of middle age. We agreed that the physical control illness erodes is something the demands of rowing can help restore, or put another way, the rower halfway through the race knows exactly who the competition is. Don’t look up, and you are allowed the illusion of winning.

I am not yet skilled enough to row the entire lower Charles, past Harvard and MIT and Fenway Park, to where the river collects in a wide basin before meeting the sea. But I dream of doing so, and of pausing to admire the Boston skyline from a perspective both new and welcome. I also dream of someone sitting on a terrace in Dubai, envying a passing sculler. In that dream I pause as well, and rest my oars as the sunrise flashes orange against the silvery needle of Burj Khalifa. Then I turn around and row home.

Geoff Kronik has previously appeared in Dispatches, as well as in Salamander, The Boston Globe, Litro, SmokeLong, and elsewhere.