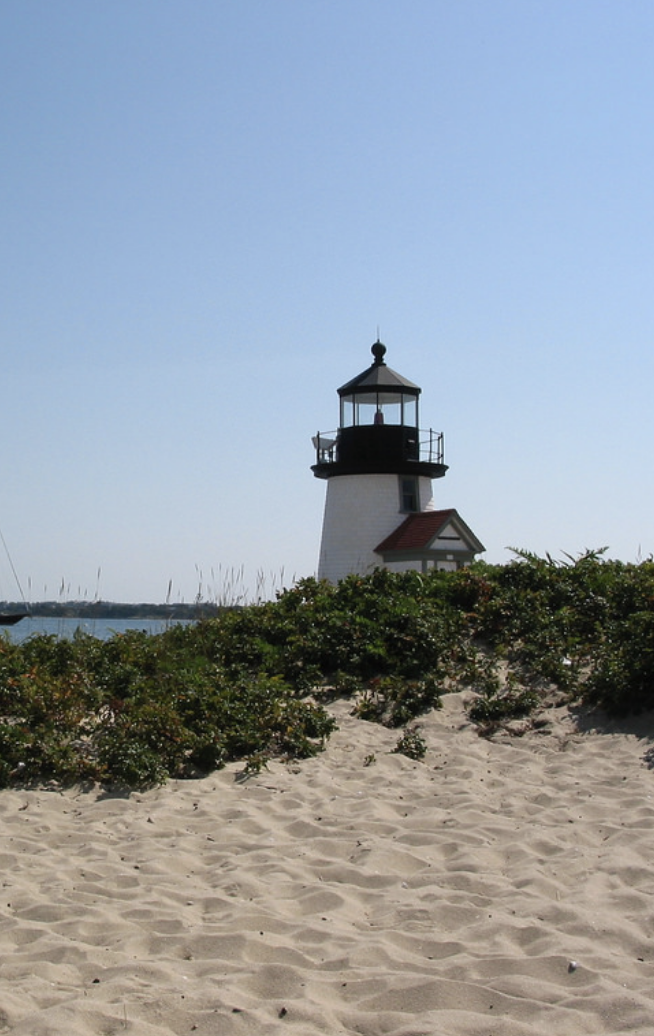 We became homeowners in the middle school cafeteria. School had been out about a month, the halls eerily empty, except for the huge skeleton of a humpback whale suspended 20 or so feet high above. It washed up on shore some years back, it’s bones bleached by the sun and sand. I washed ashore, too.

On Nantucket Island, the median home price is 1.2 million dollars. That’s what they say, officially. Most of the homes around the million-dollar mark have kitchens from the 1950s, and bathrooms from the 1970s. The new owners usually tear them down, or turn them into bunk-style housing for restaurant staff. None of us in the cafeteria ever dreamed we’d own anything, let alone a house, let alone here. I balanced on an itsy-bitsy red chair, nabbed out of a nearby classroom, something fit for a first grader. My knees were in my chest when they called my number.

Fifteen of our numbers, out of nearly a hundred, were picked out of a glass fishbowl by a 26-year-old selectman with curly hair that needed to be brushed out of his eyes. We were going to be part of the first large-scale workforce housing project on the island in as long as anybody could remember. Only on Nantucket Island is a quarter of a million dollars considered affordable for a one-bedroom house.

I watched all winter as my house went up. So did everyone else. An old Portuguese woman called me up at work: They staahhted digging yahh cellahhhole! she barked into the phone, dropping each letter R like it was hot garbage. A few weeks later, a man from the oil company called: Aren’t you getting one of them houses? They just started framing ‘em, you better drive down there. He never said who he was or how he found out. It was winter, and there was little else to do but gossip.

When I moved in that March, the builders hadn’t gotten the blinds installed yet. It became abundantly clear how close our homes were to one another. I thumbtacked bright beach towels over the windows, the winter sun cast green and blue streaks around the house. My house.

Our houses. They are all built according to the island’s strict historic district recommendations. They are supposed to remind you of whaling times, like everything else here. The island only looks as though it was preserved in amber because, after the whaling industry took a nosedive, Nantucket went broke. Poverty aids preservation.

We all have stories of where we lived before. In basements, in illegal apartments with no kitchen and only a frayed hotplate. I lived in my grandmother’s empty house, in a part of the island that had historically been declared undesirable because the cable company claimed they’d never make it out to that part of the island. Of course they did, and so did everyone else. Now there is no undesirable parcel of land on this rock.

Our subdivision is—get this—on the edge of a Wampanoag burial ground. There aren’t any headstones or anything, and you wouldn’t know it except for the small marker erected by some civil group in the Seventies. We’re about a mile from the beach, and it’s the same distance to the sewer beds. If you walk in that direction on a hot day when the system is cranking at full capacity, you’ll know.

There are plenty in town who don’t think we should be here. And we are tightly packed in—40 houses when all is said and done. At cocktails parties in five-and-six million dollar homes, lithe, blonde hostesses have told me they think it’s simply an abomination what they’re doing out on Surfside Road. They don’t know I live there. They might still say it anyway if they did, just not to my face.

The place I used to live had an outdoor shower, and no neighbors for most of the year. I spent a lot of Sunday mornings hanging my laundry in the nude, both me and the bedsheets drip-drying. Now I look out the window of my bedroom and onto the bike path, out my kitchen window and into the living room of my next-door-neighbor. It’s been an adjustment. Sometimes, in that deep-blue part of midnight, when all the lights are off, I dash into my kitchen to grab a glass of water, naked. It feels like I’m getting away with something. I hope I am.

It will take the scrub oaks and pitch pines, the rosa rugosa and the lilac bushes, dozens of years to grow and fill in all the spaces cleared for construction. Maybe one day, my little house will be covered in ivy, or roses climbing a trellis. I’ll look out the window, and see nothing but green.

Mary Bergman lives 30 miles out to sea. Her writing has appeared in McSweeney’s and Provincetown Arts, among other publications.