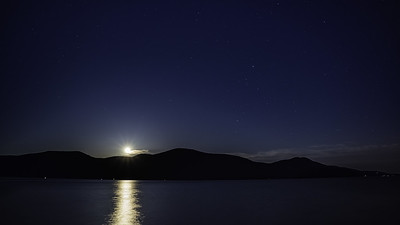 Sure, every photograph is an elegy
to what was, but this photograph—
which I’ve turned into my screensaver—
of my son, dead nearly three years,
has him suspended in mid-air
He has just jumped from a rocky outcropping
thirty feet above the shimmering water
of Lake George that flashes silver and gold.
The day itself is glittering with light
that has the feeling of being
excessive and there are (I’ve counted)
seven different shades of green
in the hemlocks and cedars and white pines
growing from the rocky soil of the island.
My son is alive in the thrill of his airborne body,
though it is quiet in the photograph,
no cheers and whoops from his friends
who are waiting at the top to jump,
no sounds of the boats idling below, or the waves
sloshing against their bobbing hulls.
I will not see him cleave the surface of the lake
and vanish with hardly a splash
and then break back into the light,
silvery water cascading from his hair and shoulders.
And I will not see him climb back up the rocks,
eager and intent on his next single-second flight.
But almost daily I give thanks
for this moment in which the past is gone
but never dead, this glimpse
of the terrible sorrow to come, but also
of something like an afterlife
in which his body, relaxed, calm, hovers
as if it’s forgotten its heaviness,
the air holding him fast, halfway between
two places at once, the good light of sky
and the ease of bright water that waits.

Robert Cording has published nine books of poems, the latest of which is Without My Asking. He has recently published a book on metaphor, poetry, and the Bible called Finding the World’s Fullness. A book of poems and prose titled In the Unwalled City, which includes the poem in this issue, is forthcoming.

J.D. SCRIMGEOUR
You’re floundering in flashes of light and dark, / so after a few minutes you scoot inside / because January’s cold, and ask your wife for help, / embarrassed you can’t do even this simple task. / She peers over her glasses, studies the tape, / then returns it unstuck, separated...