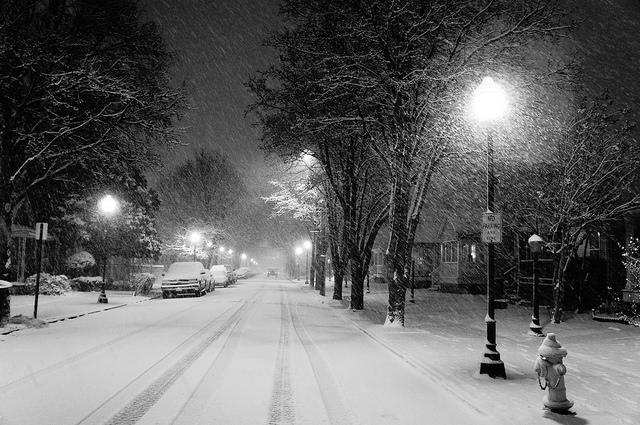 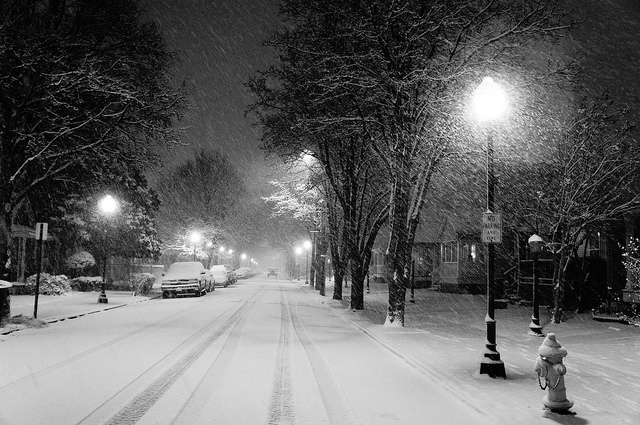 We were tipsy and in a good mood, Paul and I, coming home from our favorite bar in the whirlings of this season’s first “historic snowstorm,” when I noticed the figure floundering in the snow.

He was a dark clot of winter coat and baggy pants, on his knees, fumbling with a long rod. I peered at him.

“Is he ok?” I said. “Oh—maybe he’s just fitting a snow shovel back together.” Our steps brought us closer. “Wait, that’s a cane.” And I could hear him now, muffled by his voluminous coat, swearing as he crawled toward the curb, inarticulately grumbling and shouting into the blank face of the snowstorm as he dragged the cane forward.
We have our share of vagrants and derelicts here in town. People say it’s due to the closing of the Northampton State Hospital, a mental institution, some 20 years ago. But people here, police included, also take a tolerant view of the homeless.

I approached him carefully, and put my hand on his shoulder. “Are you ok, Sir?”

“I need some help getting up!” he barked, in a winded, gravelly voice. We set our arms under his arms, and struggled to stabilize him while he rose, laboriously, pausing for a moment doubled over and unsteady while he tried to get his slipping cane under him again. He got up with such difficulty that I was near certain he was drunk or otherwise disturbed—an impression his stream of mumblings and expostulations did nothing to dispel.

“This hood,” he grunted finally. “It gets in my eyes.” The moment he was standing, he reached for his pant leg so abruptly I thought he was falling again. “I just got a new knee,” he said, tugging roughly at the cloth. “It’s this new knee. See?”

He displayed a length of swollen, scarred skin over the joint, adorned with a single Band-Aid.

“Do you have somewhere to go, Sir?” The thin, fine snow bit against our faces. If he said no, I strategized, I’d call the police for help.

“I live right over there.” He gestured in the direction of a building of low-income apartments, barely visible across a broad stretch of parking lot, a football field’s length at least. He restored his pants leg and straightened.

“Nah, we’re just out having a good time,” I said. “It’s no problem.” Paul murmured assent. Our companion made no more protest, but set slowly off.

He had a broad, smooth bald head and a prominent hooked nose adorned with a gold nose ring. His cheeks were flaccid against the collar of his coat, his face pale. Now I could see that his eyes gazed ahead of him clear and sober; watery, yes, but blue and direct.

We flanked him as he trudged across the lot, watching his halting steps to make sure he didn’t slip. He pointed behind us. “They made us park over there,” he said. “We can’t park here when it snows. But it’s these shoes. I bought them for the winter but they’re no good. I was headed for that lamp post—I would’ve gotten myself up eventually.”

By now he was mostly addressing Paul. Perhaps, I thought, it was because Paul’s a man—or perhaps I had offended him with too condescending an effort to help. “What’s your name?” he said.

“My wife probably thinks I got lost in the snow,” said Bill.

We finished crossing the parking lot’s white wasteland. At the steps leading upward to the building’s wooden landings on each floor, Bill stopped. He stood staring straight ahead, catching his breath.

Was he trying to justify his fall? I couldn’t smell a hint of alcohol on him. We were the ones with it on our breath.

“He’d taken some heart medication,” he said. “You’re not supposed to mix those.”

“He was sitting right next to me,” said Bill. “He stopped breathing. We were watching TV, and he fell asleep. Then my wife came out of the kitchen, and she said, ‘Is he breathing?’ And he wasn’t. My wife did CPR on him and I called 911.”

We listened to this uninvited narrative in startled silence.

“Fluid came pouring out of him,” said Bill. “Then the ambulance came and they took him to the hospital. But he was dead already.”

“When was this?” I asked softly.

“September.” Bill’s voice trembled slightly. He was still looking straight ahead of him, at the silent stairs. Then he added, “It’s an addiction, he just couldn’t stop drinking. He even hated the taste of it. Of alcohol. But it’s a disease. He couldn’t stop.”

“It’s so hard for some people,” I said. I put my hand on his shoulder. “I’m really sorry to hear that, Bill.”

“We’ll be keeping you and your son in our thoughts,” I said, “in whatever better place he’s in now.”

Bill looked at me then and nodded. “It was nice to meet you both.” He shook both our hands. Then, stumping up one step at a time, he made his way toward his apartment.

We watched him mount the stairs as we retreated slowly across the parking lot, Paul turning worried glances over his shoulder. “We’ll keep an eye on him until he’s up, don’t worry,” I said. Then we saw him reach the third floor, and a door yawn open, and another figure in the yellow light of the doorway.

I raised my arm, waving. Bill waved back. We dropped our arms, but Bill lifted his to wave again. We returned the wave with arms high, making sure Bill could see us through the tree branches. Their door stayed open for a long time, watching us go.

Trudging home, I wondered what life is like for him, inside that yellow door. If he gets along with his wife, if he has other children, how poor his health is. But I felt oddly uplifted, a feeling that lasted long into the next day.

We’d fallen together into a strange, separate little snowy instant, removed from the ordinary and the normal. Bill’s life, otherwise, on the same streets of the same city, would have remained a separate blank, marching its parallel track to ours—but the storm had stripped us down to inner selves, equal, like nascent angels awaiting the gates of heaven, sharing a moment of the real in the center of a snowglobe.

Naila Moreira’s journalism, nature essays, and children’s nonfiction have been published in The Boston Globe, The Seattle Times, Science News, The Common Online, and other venues.