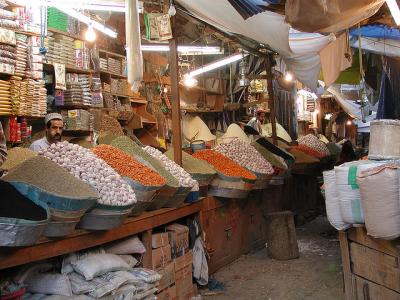 The chicken vendor’s stacked cages combine manure and death. Flatbread browning in the baker’s oven wafts smoke and flour. Metallic hints of thrown-out bean cans, misty exhaust of diesel trucks, heady tangs of eucalyptus trees. Even from inside our house the smell of fire is usual, from water pipes for smoking dried fruit and tobacco, whiffs of the neighbor’s incense, a sniff of matches and candles each time the electricity blacks out. Once we watched neighborhood kids chase after a rolling tire set afire, orbiting whirls of black and flame until the blaze consumed the tire, which wobbled in circles, then lay motionless on the ground. Children watched while acrid plumes of soot spread, lingering bitterness infusing the air.

Before they go about their daily errands, the young women of Sanaa perform an elaborate ritual. A woman takes her outer garment, a black sharshaf, and drapes it over a tall bell-shaped wicker frame. She sets charcoal aflame in a brazier, fans the charcoal until it glows, sprinkles bahour—frankincense—on the glowing coals, and then slips the brazier underneath the wicker frame. Smoke grows thick and dense, wafts upward, permeates every fiber. When walking in Sanaa, young women drift by, leaving you in a heady cloud of scent after passing .

In Yemen, money smells of spices, butter, and earth. The smaller the denomination of the bill the smellier, because of the many food-stained hands it has crossed. I can tell without looking if the color-coded note in my hand, Arabic on one side, English on the other, is a five, because it reeks of an oily mix of sweat, spices, and ghee. 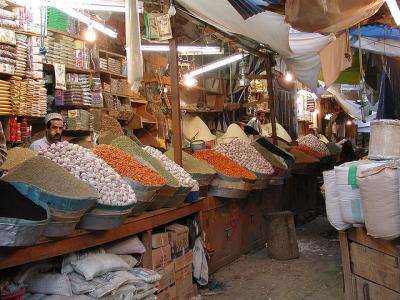 Entering the Sheraton is always surprising because you never know what awaits you. The strong aroma of heavily perfumed and chlorinated cleansers might greet you at the door, or maybe the wafting aroma of coffee and cigarettes from the espresso bar in the corner. Sometimes large groups of Gulf Arab businessmen from Kuwait, Oman, and the Emirates congregate in the lobby, their competing colognes lingering all the way to the elevator. Down at the pool, we swim amidst odors of chlorine, evergreen trees, and French fries from the pool-house restaurant merged with the lingering trace of sewage, depending on which way the wind blows.

At the petrol station, the smell of cigarettes makes me nervous. Regardless of where we stop, the attendant who fills the tank—Melyan! —dangles a cigarette from his lips, the unflicked ash growing longer as the gasoline fumes mingle with spiraling smoke, a scent fraught with danger to my cautious Western sensibility.

When jasmine blossoms are in season, sellers approach your car at nearly every intersection, arms draped with woven garlands of pale white flowers. The perfume is overwhelming, and almost too sweet, but how can I refuse to spend a few cents on something so rejuvenating? Jasmine hangs over the rear-view mirror of cars in every part of Sanaa, drivers all hoping to scent the air, imagining strolls through a magnificent garden, or perhaps an afternoon with a perfumed lover.

Some scents stir me. Every afternoon in monsoon season, clouds converge above mountain peaks, obscuring the usually clear sky. Then they let loose. Pouring rain floods streets, stalls cars, drenches anyone still outdoors. But in that brief moment before the rain falls, you can catch a heated, dusty scent of ozone, like you’ve just turned on an electric heater. After a while, the rains cease and the waters subside as suddenly as they came; steam rises from the earth, the dank air crisply renewed. Again I can see peaks and gardens, the birds flitting past fil fil trees, the grape leaves on our arbor washed clean. Sanaa sparkles. Eventually, dust swirls in dry air, leaving no sign that it ever rained at all, the sky infused with static until the clouds return.

Lee Gulyas holds an MFA in Writing from The University of British Columbia and her poetry and nonfiction have appeared in publications including Fugue, The Malahat Review, Event, Isotope, Clackamas Literary Review, and Barn Owl Review.

TIM TIM CHENG
We see the newspaper for tomorrow, not tomorrow / It’s already midnight. Today that is. News that stays / warm and inky on our fingertips at 2:30 am.