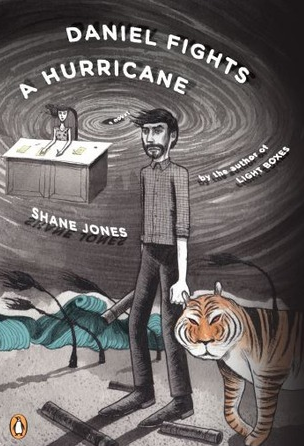 Daniel Fights a Hurricane, Shane Jones’ third novel, takes place in two worlds. One is an unnamed American town made concrete by its familiar landmarks—Target, McDonald’s, Dick’s Sporting Goods. The other is the phantasmal world of the protagonist, Daniel Suppleton—a thirty-two-year- old employee at a Stuart Services LLC, a pipeline construction site—who develops a crippling paranoia: that a Hurricane will descend and “erase everything.” The book chronicles Daniel’s retreat from the familiar world into his imagined one, and the struggle of his ex-wife Karen to coax him back to sanity.

DFH is the most realistic of the prolific Jones’ three novels, each of which takes language itself as a central theme. In his first, Light Boxes (Publishing Genius, 2009; reissued by Penguin in 2010), a town wages war on the month of February, which—in a postmodern twist—turns out to symbolize a tortured writer. Jones’ second novel,The Failure Six (Fugue State Press, 2010), takes place in a society that has abandoned speech in favor of written messages. (Jones has also published two collections of poetry: Maybe Tomorrow (Boneworld Publishing, 2002) and A Cake Appeared(Scrambler Books, 2010), and a collection of stories: I Will Unfold You with My Hairy Hands (Greying Ghost, 2008).) The book unfolds in short, page-long sections that oscillate between Daniel’s and Karen’s perspectives. Curiously, Daniel’s voice is rendered sometimes in the first person, and at other times in the third-person omniscient, an unsettling choice that makes him seem even less reliable as a narrator. The novel opens with Daniel’s confessions of anxiety to Karen, whom he has mistaken for his therapist. In an effort to remain connected to Daniel, Karen plays along, listening with some ambivalence as his hallucinations intensify. Yet Daniel grows ever more remote, setting out into the woods with a host of imagined characters. His goal, he declares, is to save an underground village from the impending Hurricane and—ironically—to “find my wife”: the very person he has left behind.

What makes DFH both interesting and disorienting is its refusal to disambiguate Daniel’s narration as unreliable, or define his condition as madness. A more conventional writer might clue the reader to turn a clinical eye on Daniel, and to treat the book as a study in psychosis. But Daniel’s inner world is so richly described that by the end, it feels more accessible, at least emotionally, than the spiritually barren, ‘objective’ landscape of Dick’s Sporting Goods and McDonalds. Most of the book details Daniel’s hours in the woods, where he hallucinates a parade of enigmatic personalities, including a woman with the face of a moose and a man who dismembers elephants. A few join him in his quest to save the imagined village, including a man who distributes two-second dreams, the world’s most beautiful man with the world’s worst teeth, and a mind-reader named Iamso, who transcribes Daniel’s thoughts into verse:

The moon will break into three,
and the sun will be there to miss the catch.
I’m sorry.

The verses—always eclectic, often inscrutable—are characteristic of Jones’ writing, which will frustrate readers more inclined toward a linear narrative. Despite its fabulistic tone, there are moments of psychological insight, all the more haunting for their gnomic simplicity. In Daniel’s response to one of Karen’s questions, for instance, Jones captures the vertigo of anxiety, which he interprets as a kind of existential panic:

Also arresting is the cryptic “You’re to blame just because you are,” spoken by one of Daniel’s imagined characters.

Jones’ real focus is language—how it, too, can function as a kind of place, from which a mind can become estranged. Daniel, for instance, repeats his own name throughout the book, as if to reclaim the familiar lexicon that his hallucinations have foreclosed. Underlying Jones’ lush and often playful imagery is Daniel’s sense of exile from his own mind. Iamso records Daniel’s thoughts, for instance, but forbids him to read them firsthand. Capturing this sense of alienation from words is one of the book’s achievements.

Less convincing is Daniel’s relationship with Karen. Their conversations anchor the novel stylistically, offering a counterpoint to Daniel’s delusion. The novel opens in Karen’s office, after Daniel has mistaken her as his therapist, where he articulates his abiding fear of the Hurricane. Soon after, in several sections narrated by Karen, we are offered a picture of their deteriorating marriage. As Daniel began to withdraw, Karen kept a journal of the number of words he spoke daily—a number that shrank from 300 to zero. After Daniel’s fear of the Hurricane overtakes him and he runs away, Karen assembles a search party and sets out after him. Her narration alternates between brief descriptions of the search and her memories of Daniel and of coping with his absence. The writing in these sections is oddly flat. Karen feels less like a character than a narrative device, a foil for Daniel’s hallucinations. She is either remembering her history with Daniel—“[w]ith Daniel everything felt fun and fast at first”—, lamenting his absence—“the single hardest thing was sleeping alone”—, dreaming about Daniel, or watching “mindless reality show[s]” only to find herself wondering “what he [Daniel] is thinking.” To be fair, Jones does not set out to paint two portraits. His focus is Daniel, and the membrane between Daniel’s delusions and the world he leaves behind. As Jones put it in an August, 2012, interview in BOMB:

[O]ne part of the book, containing the sections with Daniel, is a tree. The tree is growing straight up into the sky. In this part, I can do whatever I want, I have total freedom in creation. The tree is uncontrollable and just insanely growing. The other part of the book—the one with Karen—is based on reality, and is like vines growing around the tree. The vines and the tree are separate but every once in a while, they cut into each other…

The trouble is that the vines in this story never take on a life of their own—and insofar as Karen fails to come alive, Daniel’s blindness to and apparent love for her fails to elicit the sense of tragic irony that it should. Karen’s world proves so flimsy that Daniel’s engulfs it. In a surprising twist, the fabled Hurricane strikes after all, dooming the search and threatening Karen’s life. The language remains ambiguous enough that this choice seems neither contrived nor entirely clear. We remain unsure which world we inhabit—that of Daniel’s mind or of the world outside it. As a result, we’re left curiously adrift in Jones’ topography.

Lindsay Stern‘s work has appeared in American Circus, Weird Fiction Review, PANK, and The Faster Times, among other publications. Her first book, Town of Shadows, was published in August 2012.