In his biting, insistent book of poems, Bastards of the Reagan Era, Reginald Dwayne Betts lets the reader know he will not depict the ghetto in the feel-good manner of the early ’90s films he references, Menace II Society and Boyz n the Hood. From the solid black cover to the desolate landscape contained therein, light rarely penetrates his bleak book, in which the “boyz” are “bastards” abandoned by Ronald Reagan’s misguided war on drugs. Just as Betts claims “there is more than a dead black / man in the center” of his book, there is more to the author than someone who grew up in a tough neighborhood, sold drugs, and went to jail.

Dwayne Betts was an honors student taking AP classes in Suitland, Maryland, just south of Washington, D.C., when, at 16, he started smoking pot and fell in with the wrong crowd. One day, he and a friend went to a mall looking for trouble. When they found a man asleep in his car in the parking lot, they carjacked him. Their joyride was short. Betts was soon arrested and sent to prison. Betts was a juvenile, but since he used a gun, he was sentenced as an adult and spent over eight years in prison, sometimes in maximum security facilities, where he did stints in solitary. At a time in life when a young person seeks his identity, Betts’s was stripped away in the dehumanized environment of prison, “the country / Where life is cheaper than anywhere else.” 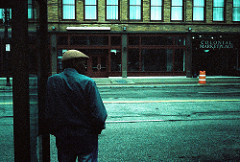 In an alternate universe where Charles Ramsey never gets five minutes of fame because he mentions slavery instead of McDonalds. Charles Ramsey did five years for beating on his wife and read Battle Cry of Freedom, Destruction of Black Civilization, some bell hooks, some Sonia Sanchez, some Fred Douglass, this book list he got from a feminist woman who came in to speak to the fellas about domestic violence and the ramifications of abuse and got serious counseling while confined.