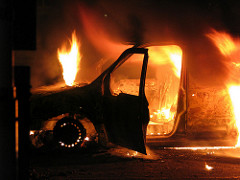 The first sign of arrival fills the air
when smoke appears, dark red, like iodine
poured into ethanol, a helix, thick
and turning. What the burning marks is time—
the seasons, warehouses of food consumed
entirely as two women pause and stare.
They’ve just come from the theater. One folds
a shawl into her pocketbook, her bare
arms pink, still tender from a sunburn. Do
they recognize the change when it begins—
the first turn of the carriage wheel; the bloom
of anger in the chest; the sound, the click
an oar makes sliding in its lock? Or would
it come unseen, a face beneath a hood?

Jonathan Fink is an associate professor and the director of creative writing at the University of West Florida. Dzanc Books recently published his poetry book, The Crossing, and he has also received the Editors’ Prize in Poetry from The Missouri Review; the McGinnis-Ritchie Award for Nonfiction, Essay, from the Southwest Review; and fellowships from the National Endowment for the Arts, the Florida Division of Cultural Affairs, and Emory University, among other institutions.