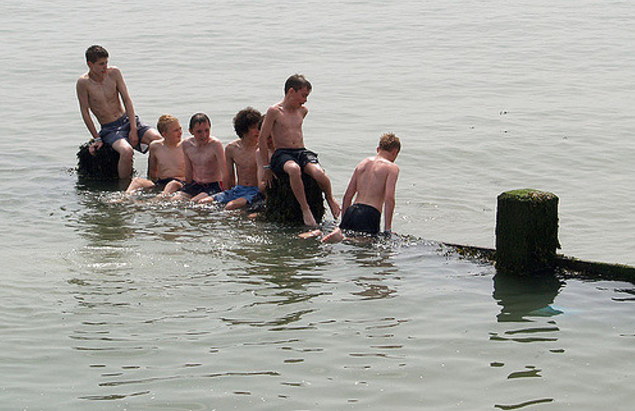 that they are not men,
that they have not settled into their beards and
remorse, their crow’s feet and givens.
There is not yet an investment in houses
settling onto their foundations, hair, or
yesterday. The boy senses his time is precarious,
growing shorter as he sprouts up, so he spends
time believing, in everything,
he climbs and
he tumbles and tunnels and spills and
puts to good use his stones and his quarters,
penknife and book, even the stick he uses
to defeat his awkward shadow. He will dream
into existence a raft, a rocket, a fort of mud.
From a cloud
a gift of horses.
From the sand
castle and moat,
kingdom and cause.
Every boy knows he is a lone king,
that above hover dragons
from which he cannot withdraw, and so he must
pull from his quiver the makeshift arrow,
so he must draw the bow, and not yet divided
from his body all is possible.
He looks up
toward a darkening horizon, certain. So certain.

Vievee Francis is the author of Forest Primeval, Horse in the Dark, which won the Cave Canem Northwestern University Poetry Prize for a second collection, and Blue-Tail Fly. Her work has appeared in numerous journals including Poetry, Waxwing, Best American Poetry 2010, 2014, and 2017, and Angles of Ascent: A Norton Anthology of African American Poetry. She was the recipient of the 2016 Hurston/Wright Legacy Award.