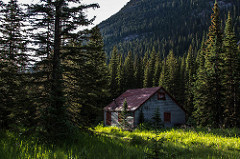 The mind swings inward on itself in fear
Swayed towards nausea from each normal sign.
—derek walcott, “A Lesson for This Sunday”

On a lake, in the woods, in 1940, my grandparents built a cabin. One room, big stone fireplace, outdoor privy. They lived and worked outside New York City and spent summers in Maine, my grandmother often here alone with three young kids but no electricity, plumbing, or heat except the wood-burning fire. Surrounded by one hundred acres of no one. Up the road, there were neighbors: the Garnetts and the Hibberts—and the Savages, who lived up to their name, my grandmother used to tell me. They ate with their hands off the table’s pine boards. Mrs. Hibbert shielded her children from the Savage boys when they came around, sometimes en route to my grandparents’ place for supplies—whatever was lying around unprotected.

My cousins and I spent long summer days and nights with G & G, often put to work in the woods, orchard, and blueberry field. Buggy and sweaty, but rewarded with a swim and some kind of fruit pie when our jobs were done. Even sleeping in the hot, airless loft, awash in cousins’ snores, was a small price for the beauty, the moments of calm, eating lobster in our bathing suits, and the snugness of family.

Today the old generation is gone, but three more generations of our family, and the Garnetts’ and the Hibberts’, still live or spend time here. The Savages left long ago—no one seems to know what happened to them—and my grandparents eventually bought their property. The old 1940 cabin decayed after my grandparents died, all except the fireplace, and the renovated place is full of exposed beams and glorious lake views, hot water and electric heat, though still no air conditioning or insulation around the pipes. If we skied or snowshoed in, we could “camp” here, waterless, between mid-November and the late April (sometimes later) thaw, which is what my grandparents sometimes did. Grandpa left their car at the top of the town road and drove the tractor down, Grandma perched on a runner, holding onto the back. A long, slow, very cold mile.

End of summer, after rental season, after Labor Day, I am here. Alone. Though not entirely. The first morning, a loon, elegant and alert, appeared straight off the dock. The next day, two wide-winged, darkest hawks, whose feathers audibly beat the air, and two salad-plate-sized painted turtles just off the tip of my kayak paddle. Their presence assuaged, if didn’t forgive, my guilt over smashing one with my car last month. Finally, a bald eagle took my breath away. Though merely an adolescent, its speed and span made me feel lucky—lucky to be here and lucky that I am not a fish, like the ones that had been jumping foolishly out of the water all day.

Also here is fear. I expected it, but not its force and staying power. It descends like evening mist at the hour when the treetops across the lake are fringed in pink, when the water picks up hues of orange and purple, when the world becomes more and more deeply blue, then ceases to exist.

As a child, raised without siblings in a house in the woods just twenty minutes from here, I was not afraid of the forest. I was not afraid of nightfall. Now I wish I had never learned, as all children eventually do, how an interior at night so glaringly illuminates those within while perfectly obscuring those lurking without. For a moment during my first night here, and many moments since, I’ve wished I was back, cocooned, on the seventeenth floor of the Abu Dhabi high-rise where we lived all last year, looking safely down on all below.

These weeks are the first I’ve ever been at the cabin alone. Though I didn’t know it when I planned the trip, I anticipated this return not least for it being on my own terms: solitary, engaged in labors of my own design. The days are glorious, but after sunset, I can’t find ease.

What am I afraid of? I ask again and again. Not the dark, not the wildlife, not the raging rain, thunder, and lightning. All that’s a comfort. I’m afraid of people, people like the Savages with little to lose, boys and men too naïve or demented to worry about consequences. There’s a pair of local brothers—isn’t there always?—who, as soon as they get out of jail, go back to business robbing the camps along the lake. The Hibberts’ washer and dryer were hauled off, their shed broken into, earlier this summer, others up and down the road robbed, too. Our place, my place, being more isolated, is less attractive to looters in some ways but more vulnerable in others. Whoever comes down here is committed to getting away with it. There’s no place to turn around until the very end, when you’re either on the doorstep or in the lake.

If he’s a smarter thief, he’s done his homework, and he knows the cabin’s occupied these days. If he’s a nasty sort of smarter, he counts on the occupant being a woman on her own.

What I’m most afraid of is the moment of encounter. When I hear the lock picked, the glass breaking, will I be able to find the door (and unlock it) and escape, in my pajamas and bare feet? If we come face-to-face, how will I react? Will I scream, knowing sound carries fast and hard across the water? But who’s over there on the other side—no one on this side seems to know—and how fast could they rescue me, anyway? Would I try to dissuade with words? Lie? The police, the armed husband, etc, on their way?

I’ve done the normal rational/irrational things to force the opportunist to make as many decisions as possible, to encourage him to reconsider with each step. Some obstacles need no setting up, like the winding, unlit drive I’ve been walking up and down every day, making noise, showing the squirrels and the finches that I’m here and not to fuck with me. I do my best to make the place appear busy: run the dishwasher every night, turn on all the outdoor bulbs and keep indoor lights to a minimum. Double-lock the doors. Retreat to the farthest corner of the house. Prepare for a quick escape: Wear to bed my watch and wedding rings (off during the day so I don’t lose them in the lake), and put on the nightstand the house phone (no cell service here) and car keys and glasses. Finally, I scoot my little VW into the mouth of the driveway so it’s both ready to take off and an effective block to other vehicles.

This isn’t a younger me. This is me now. I take only some heart in knowing other women who would do the same.

Why should I be so afraid in a place that once gave me so much comfort and pleasure? It’s frustrating to have grown up only to fall—regress, it seems—into a fear that I should be able to dissuade. It’s rational, of course, to believe that irrational people can be dangerous. But it’s so dramatically unlikely that I’ll run into someone who’s irrational in a violent way. This is the way in which fear slides dangerously toward solipsism. As adults, we learn to conquer fear with data. Maine remains one of the safest states in the country, with violent crime occurring to just 0.001 percent of the population; there are hardly enough people to both commit crimes and be victimized. I’d understand my fear better if I’d always been afraid of the dark or the woods, or if I had in mind a local horror story. Or, especially, if something scary had happened to me in Maine, or in any rural area. Fear is stimulated by our environment; fear preys upon encounters in similar places. This, too, is part of learning. But while I’ve been threatened and have feared for my life elsewhere, never once has it happened in the middle of the woods.

And yet, as Walcott writes in the last stanza of “A Lesson for This Sunday,” in which idle children torture a butterfly, there’s

and everywhere the frocks of summer torn…

Innocence and cruelty are not always, or even often, matters of intention, but of circumstance. As my mother helpfully says: The only time you’re truly safe from harm is when you’re dead.

We are social creatures, I remember, bolstering, and there’s pleasure—solace of a kind—in simply being old enough to think things through. In having time and space in my mind as well as in the lake, in the sun. And so, at night, I feed upon the solitude gained during the day, and am kept company by the loons. Some find their escalating, three-note calls haunting, disturbing, a desperate cry for help. I find them so beautiful, I ask them to sing me to sleep. Eventually, they do.

Pandemic Poets: A Conversation with Tess Taylor and Dana Levin

JENNIFER ACKER
In 1969, my grandfather gave the keynote address to the Master Brewers Association of America. He was not a brewer himself, but he had worked thirty years as a consultant to the industry, and by this time he had provided advice to breweries in every state of America and seventy countries.