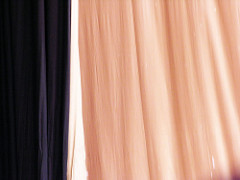 Behind painted vines (in the lofty
Theater–amazement ran riot)
I conceal the hero’s tragedy,
The time of action–and–the seat.

In waterfalls of rainbow, an avalanche
Of laurels (he expected them! he knew!)
I veil you from the audience
(I mesmerize them with my sway!),

My prize! Hid in a painted forest
Of potions, grasses, stalks…
(Now behind the shaking curtain
The tragedy–moves–like a storm!)

Strip the wound! Stare! It bleeds?
Then have the trough prepared!
I’ll draw this royal wound to the end!
(The hall is pale, the curtain is red).
Then, a soothing shroud, it falls,
Rippling like a hero’s banner.
The curtain has no secrets–from the hall
(Life is the audience, I am the curtain).

Poems translated from the Russian by Catherine Ciepiela

Marina Tsvetaeva (1892-1941) was one of Russian poetry’s most brilliant and tragic figures. She is the author of scores of lyric and narrative poems, plays, and essays, many written in European exile after the Bolshevik Revolution.

Catherine Ciepiela writes about and translates modern Russian poetry. She is the author of The Same Solitude: Boris Pasternak and Marina Tsvetaeva and co-editor of The Stray Dog Cabaret: A Book of Russian Poems, by translator Paul Schmidt.