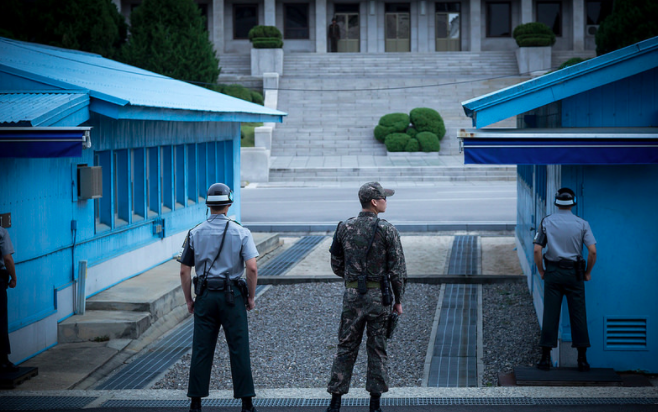 Some say it’s the most dangerous place in the world, but that might depend on your species. Surrounded by barbed wire, minefields, and soldiers, the demilitarized zone between North and South Korea seems anything but, yet this strip of land a couple of miles wide and about a 160 miles long is a safe and peaceful haven for plants and animals. There has been almost no human activity within it for over 50 years.

From the windows of our United Nations bus, we see flocks of cranes rising from the broad grassy wetlands. Red-crowned cranes, a symbol of longevity in Asian art and once thought extinct, thrive here. There is evidence that endangered leopards, bears, antelope, and possibly even tigers survive within this no man’s land. The weather is beautiful on the day of our visit—bright and crisp—and we are relieved to get out of the UN bus (a school bus painted blue) and take photos at a scenic lookout.

We gaze across the border toward distant mountains, trying to make sense of the swath of apparently dangerous green that lies before us. A 525-foot flagpole flying a nearly 600-pound flag of the Democratic People’s Republic of North Korea dominates the trees and hills. As our guide explains the conflict that led to this structure, an insect unlike any I’ve ever seen lands on my shoulder. In shape and color it resembles a large ladybug, but its lacquered orange shell is marked with a pattern that resembles a mathematical symbol, or perhaps a character from the Korean alphabet. It is curiously tame, and doesn’t fly from my hands as I examine it, wondering if it might be one of the famously rare species that has found refuge in this borderland.

The bug is friendly, and so are most of the people I have met during my two-week visit to South Korea. Flocks of school children and teen-agers rush toward our tour group of nine American visitors, eager to greet us and show off their English. As I climb steep steps to the Seokguram Grotto to see the treasured statue of Buddha, a self-identified Japanese “salary man” smiles and takes my arm as he asks me about life in the United States. Later, the woman who single-handedly cooks a 26-course Korean meal for our group comes out of the kitchen to smile shyly as we applaud her culinary accomplishments. And at the museum, two young docents smile indulgently as they try to teach us the art of tying traditional decorative knots.

The only person who does not smile is the North Korean soldier guarding his side of the border in the conference room at Panmunjom village in the Joint Security Area. A fellow tourist takes a picture of me standing next to him. His face is hard and expressionless. He does not acknowledge my existence, nor, like on-duty soldiers around the world, does he respond to the other tourists around him. One of my bus companions also took a photo of the beautiful insect that landed on my shoulder. When I look at the photo now, I remember how tame it was, and how it explored my open palms before flying off into the DMZ, that inadvertent nature sanctuary created by the decades of human tensions.