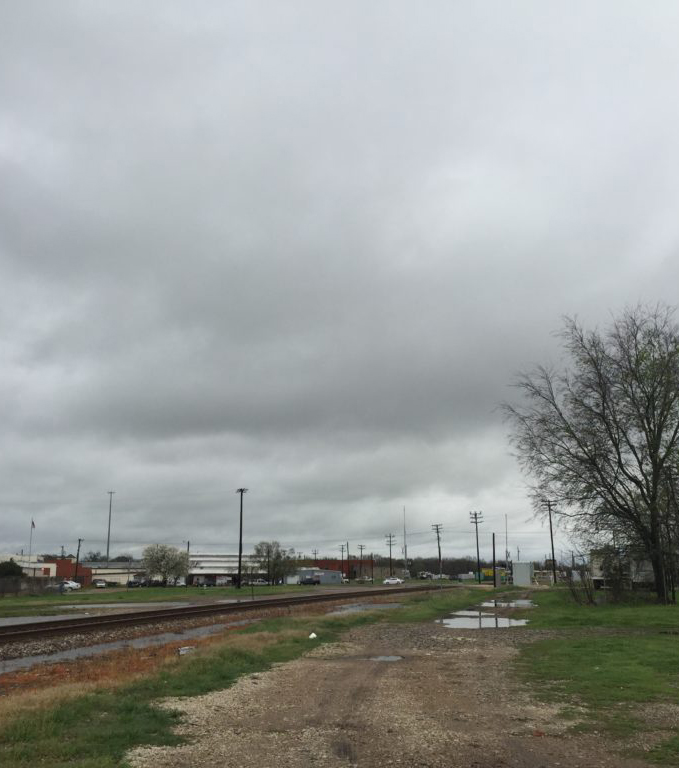 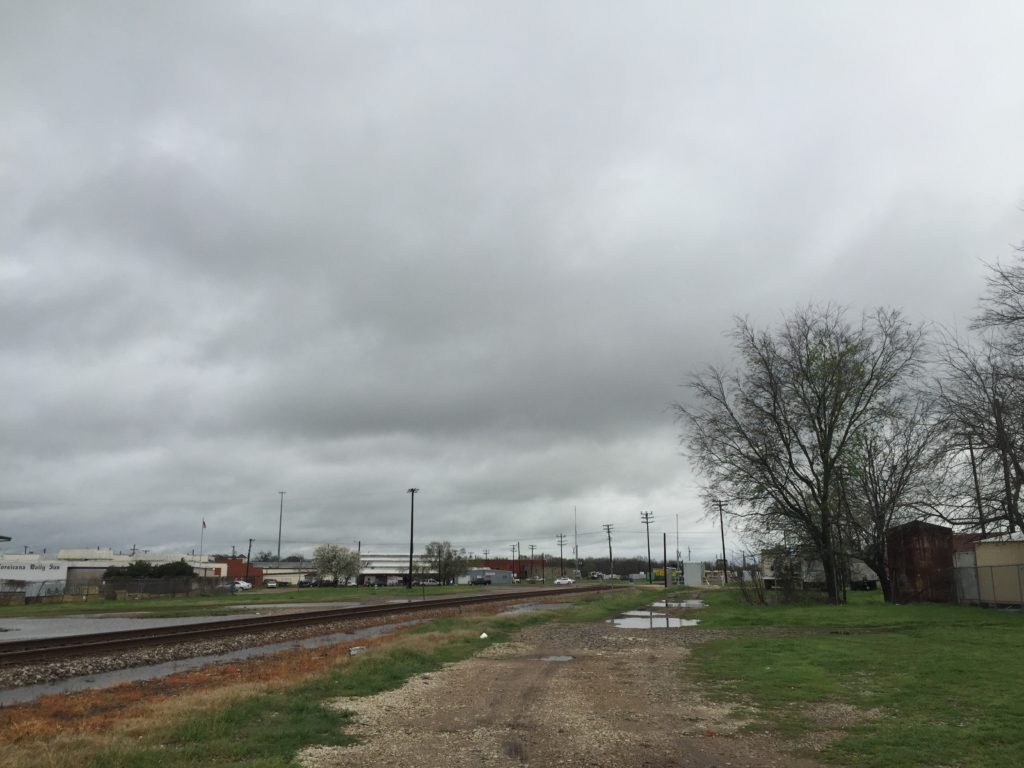 CORSICANA BRICK CO. So say the bricks, cut within an inch of their lives, and the wet leaves like beetles’ wings, caught in the cobbles. We are the bricks’ leaves, they say, under my feet.

The color of the leaves is the color of the rusty railroad spikes that I gathered in the rain. Illegally, it would seem. Property of the train company, I’m told – possessed by others.

But there is no one around to mind.

I line the spikes up on the heater in my room, and they dry, paler than before, and I don’t care that they’re not mine because they are mine.

Before I go to the train tracks, I go to the cemetery. Small Texas towns know their cemeteries. They know burying people.

The white stone angel in the cemetery has a hole in the back of her head, and she watches the house just beyond the fence. This house on the cemetery, the swinging of its swings in the yard.

I pass a grave marked RAINWATER. What a name in this week-long rain. Like a joke.

A vase of pink silk flowers has filled with water and tipped over.

It’s silly to spend a rainy day outside.

But then I go to the tracks to crush pennies because I have never done it before. I take out my wallet and line up ten pennies on the rail. Down the street from the little cafe. No one around.

Maybe I will find a few of them, after the train comes. But not all.

Later, when I hear the whistle, I go back. I find four or maybe five: two of them have merged into one, I think, thinned by the rushing wheels. The others have been thrown for someone else to find.

I go back several times a day, setting out the pennies and then returning after the whistle to look for them. One day, a man walks towards me in a True Value Hardware uniform. His name patch reads: Lucky.

He asks me what I have been doing out on the tracks everyday, several times a day, squatting down and then walking back and forth. The guys and I have been wondering, he says. And I say that I have been crushing pennies, and I show him, opening my palm. He smiles. Sounds like fun.

I keep coming back.

I have sixteen pennies. Some are flat and blank, like nothings. Others are marked by the shadows of shapes. And others are stretched out: a Lincoln Memorial like Dali’s clock.

I ruin them, but it doesn’t matter as they’re not worth anything. Worth less than the metal they’re printed on, I once read.

I ruin them to make them worth something.

At night, the train cries, waking me. It says: I run these tracks until I am tired. Because I am a train, I am tired. I crush your pennies. I smash them down. You can come and get them tomorrow.

Then I fall back asleep. In the morning, I walk to the tracks.

My friend says that the train keeps him up. I have some earplugs I can give you, I say. The train cries each night, heard by rooms.

The train knows rain. When it passes through town, it says: Yes, I know rain.

The white stone angel in the cemetery also knows rain, for she presides over puddles and wet silk flowers. And she has that hole in the back of her head, big as a baseball, into which trickles the runoff of the world.

The dead people called RAINWATER know rain, whoever they are. They are a gray monument.

And the pennies know the rain. They know the mud that I wipe off them when I pick them up, from among the rocks where they hide. I dry them with the shredded Kleenex in my purse and put them in my pocket.

The pennies know the rain because it is rubbed off their smoothed bodies, and it falls off, the land, in my hands.