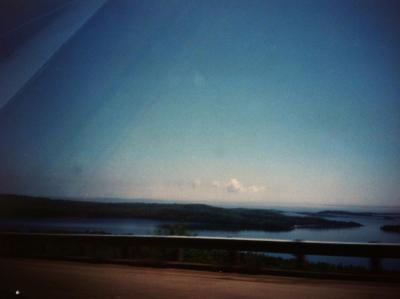 This is the final installment part of a three-part dispatch. Pt. 1 and Pt. 2 can be found on The Common’s website.

The first order of business was to find the source of the leak. I went downstairs to the parking lot and started the car. Water pooled on the ground in the time it took me to get out and raise the hood. Finally, I nailed it down to a blown intake gasket. A spot about six inches long between the engine head and the intake manifold that bled water and antifreeze.

Catricia’s brother called, and I told him where the leak was. He said the first step was to get some Stop-leak and see if that would seal things off. We looked in the yellow pages and found a Wal-Mart not far away, so I filled the car with water and we drove off, leaving a trail on the pavement.

Wal-Mart is Wal-Mart, even in Canada. I found the Stop-leak, with the side of the bottle written in French was facing out on the shelf, and even though I’d had three semesters of French in college I turned it around to make sure I had the right thing. In the parking lot we poured the stuff into the radiator and let it circulate, water dumping the whole time, until a fairly wide stream ran across the empty parking spots next to us. We just stood there watching it, waiting for the stuff to work its magic and seal up the gap where the piece of gasket had been. But it never did.

A car pulled up beside us, and a man rolled down his window and said in a thick northern accent, “Your car’s leaking,” as if we hadn’t noticed and were standing there trying to remember if we needed to pick up milk. “Yeah, we know. Thanks,” I said, in an overly friendly tone. As he drove away, I pulled the jugs of water out of the trunk to refill the radiator once more before heading across town to the hotel.

We’d decided that even with a broken-down car we were going to do something fun. We had two more nights booked for our hotel, and Thunder Bay’s minor league baseball team, the Whiskey Jacks, (part of the farm system for the Blue Jays) were playing at home that weekend. We found a restaurant, something a little nicer—though to us then, anywhere that had a full bar and cloth napkins was a nice restaurant. We showered and got dressed, went to the ATM across the street to get Canadian bills, and called a taxi.

The restaurant had good food, and we laughed and ate, relieved for just a moment to not be thinking about the fact that we were stranded in another country and had no clue how we would get home, or once we did get home, how we would live without a car.  Other people sat at the tables and booths around us doing the same—families and couples and friends—keeping at bay whatever was going on in their lives at that moment, good and bad. Sharing a meal is always a good step toward peace.

On our way out, we asked the hostess if the ballpark was close enough for us to walk. She said it wasn’t too far, really only a few blocks, so we decided to save money by skipping a cab ride. Those couple of blocks turned out to be three main intersections on a stretch of four-lane highway about three-quarters of a mile apart. There were no sidewalks. We were just cutting through parking lots of the businesses that faced the road, still laughing and trying to make the best of things. But after a while, the cheerfulness became something else, something that wasn’t coming from our true selves. Something to keep from breaking down at the absurdity of it all. After twenty minutes, we’d gone silent, both looking ahead, trying to see if the ballpark was on the horizon.

When we finally arrived at the game, our spirits lifted again. We’d both grown up going to see the St. Louis Cardinals as kids—really, one of the only regular trips to the city either of us had experienced in our childhoods was to Busch Stadium. For me, those trips were when my parents were happiest. After they divorced and my mom was remarried, she’d gone to a game with her sister and brother-in-law and with her new husband, and when she walked through the tunnel and saw that bright green field, she choked up. When they played the national anthem, she broke down and cried.

So here we were at a baseball game in Canada, and the fans were the wildest bunch we’d ever seen. They were hockey fans waiting out the summer. Men and women in their forties and fifties and sixties who obviously had season tickets and knew each other from weeks of sitting together in the bleachers. They yelled at everything: at the players on both teams, at the umpires, at the little kids competing in promotional games between innings. During theseventh-inning stretch, there was a contest to see if the ground crew could drag the field in a certain amount of time, and if they didn’t make it, a fan would win a VCR. The grounds crew beat the time, but these fans started booing and yelling, “They did a lousy job!” All of this was followed by great laughter and the ordering of another round of beers. I can’t remember if the home team won or lost, but that game remains the brightest spot in this trip. Bogie and Bergman always had Paris, and we had the Whiskey Jacks.

The next day was all business. We went to a Napa Auto Parts and bought the necessary supplies: two cans of brake cleaner and JB Weld. I sprayed the brake cleaner all around the blown gasket, getting rid of any dirt and grime. We watched TV in the room until it had dried completely, and then sprayed the other can in the same spot to make sure it was perfectly clean. After that had dried, I mixed the tubes of JB Weld and spread it along the line where the head and the intake met, hoping to plug the leak. And then we went to bed.

The next morning was our last in Thunder Bay. I went out, filled the radiator once more, and started the car. It didn’t leak. The JB Weld had made a watertight seal, but not an airtight one. Vapor would escape over time, but we could make a run for it. We checked out of the hotel and walked to a Subway nearby to spend the last of our loonies and toonies. I remember walking back, looking over at Catricia and thinking, when we left home we were on the verge of splitting up, but now it was as if we’d been united all along. That there had never been anything between us. We’d just needed something to rally around.

Now, the choices that seemed so clear in those moments become muddled in hindsight. Like being on a game show and thinking that there is great strategic skill involved in choosing to see what’s behind door number two, only to find a dozen more doors waiting there.

The trip home went like this: we could make it 100 miles before the water in the radiator evaporated through the blown gasket, and then the overflow reservoir would rumble with boiling water, and the digital thermometer showing the outside temperature would start to go up. Then we would pull over, wait a while, fill up with water, and drive on. We kept empty anti-freeze jugs in the floor of the backseat and would refill them every time we stopped. Most gas stations had an outside spigot they would let you use for free. Once, I refilled the jugs in a roadside ditch full of water. But we kept on in that way, 100 miles at a time, gaining ground toward home.

This was to become the pattern of our relationship. Escape. Crisis. Going to the brink and almost calling it quits. Then rallying together. Over the years, the crises became bigger. The rallies became more desperate. We were always good together when the chips were down, when there was something to be overcome. And we were good. But after a while, you can only patch things together for so long before they finally come apart completely. 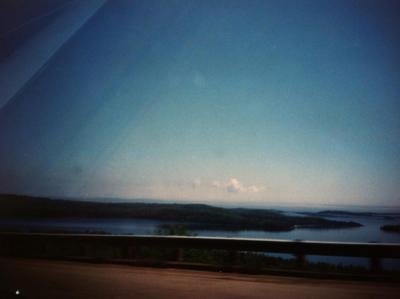 When we crossed the border into Illinois, we felt more at ease. Though we were still nearly six hours away, being in our own state took away the fear of being stranded. We even thought we might be able to make it all the way, to cripple the Caddie home on a tube of JB Weld. But we came up short. We made it to a stop on the interstate surrounded by green corn fields that stretched horizon to horizon. El Paso, Illinois. There was a gas station and a Hardee’s. The car died about a mile before we reached the exit and that was it. No more starting it. No more anything. It was done.

We walked for a short bit, but then a young woman in a huge pickup truck stopped and took us to the Hardee’s because she said people were often carjacked on this stretch of the highway. We were just glad for the lift. Catricia called her dad, and he set about finding a car carrier, then started the four-and-a-half-hour drive north to bring us and the car home. We sat in the Hardee’s, reading magazines and watching the different groups of older people who came to eat and socialize. The lunch crowd left and there was a long, quiet time through the afternoon. I joked about asking for a job to pass the time. Catricia’s grandmother called the Hardee’s, and the manager came out and said she could go back and talk in the office. We started calculating her dad’s ETA. If he’d left at a certain time and averaged 50 miles an hour, he’d arrive at X. When X passed we’d recalculate. By the time we had him down to 20 miles an hour, the supper crowd had left and the sun was setting. We decided to go outside and wait.

Behind the restaurant was a gravel pile, and we walked out and sat there watching the northbound lane of the interstate to see if we recognized her father’s truck. It was one of those spectacular prairie sunsets, the sky moving from yellow to orange to purple to starlit black as you scan the western horizon overhead to the east. To me, this is where that trip ended. It’s as far as we could make it on our own steam. And there’s a part of me, even now, that longs to be sitting there, staring into the growing dark with her, waiting for someone to come save us.

James Alan Gill holds an MFA from Southern Illinois University, Carbondale. This is his tenth dispatch for The Common.
Photo by James A. Gill