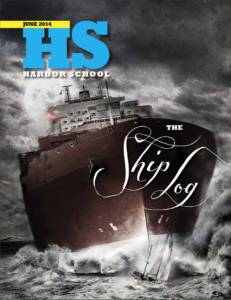 In February, 2014, eighteen seniors at Harbor School, a New York City public high school devoted to maritime careers on Governors Island, a historic military base turned national park, embarked on their first fiction writing efforts. For the next three months, their composition class, which Harbor School veteran teacher Anna Lurie and I taught was devoted to little else. On June 3, they read their work, first in the library, then after school in the Mess Hall to classmates, teachers, and family and distributed copies of The Ship Log, the magazine containing their stories. It was a big day for all of us.

Staff and other students at the readings were openly moved by the depth of emotion, conviction, and vividness of the pieces, a testimony to the students’ talent and effort and the power of place to inspire good writing.

Harbor School prepares students for work and advanced training in such areas as vessel operation, boat construction, marine technology, marine biology, scientific diving, and aquaculture. When they weren’t in third-period composition or other academic classes, the student-authors of The Ship Log were scuba diving; growing oysters to reseed New York Harbor’s once vast beds; manning and restoring old sailing ships; and crewing on a variety of commercial boats.

At the beginning of Moby Dick, Ishmael describes New York crowds flocking to, craving the water:

Posted like silent sentinels around the town, … thousands upon thousands of mortal men in ocean reveries. Some leaning against the spiles; some seated upon the pier-heads; some looking over the bulwarks of ships from China; some aloft in the rigging, as if to get a still better seaward peep… They must get as nigh the water as they can without falling in.

Like Ishmael, Harbor School kids don’t sit on pier-heads. They dive in. The idea that they would have something special to say because of their relationship with the water was the genesis of The Ship Log.

Governors Island, the original site of the Manhattan purchase, is a sort of “ghost” island. It has a fort, empty officers’ houses, barracks, chapels, and recreational buildings dating from the 18th to the 20th centuries. It’s not hard to imagine officers’ wives in gowns and bonnets emerging onto the porches of their yellow clapboard houses on Colonel’s Row or soldiers keeping watch on the grassy ramparts.

The island is only served by ferries—open to the public in summer, but limited to students and people who work on the island in winter. You can kayak over, though it’s pretty scary cutting in front of the Staten Island Ferry or surfing the wake of a block-long ocean liner. (I did it once.)

Anna and I started by showing the class photos of capsized, beached, and burning ships from the book Shipwrecks in New York Waters by Paul C. Morris and William P. Quinn for inspiration. The students all branched away from literal interpretations of the images, but a tone of drama persisted, even if only the name of a vessel survived into the final draft.

The Ship Log benefitted from an unusual amount of serendipity. Vera Naughton, an art director with thirty years of experience (and a fellow alumna of BusinessWeek Magazine) offered her design services and sent out an all-points bulletin to illustrators around the world. Randy Pollack, Anita Kunz, Olaf Hajek, Hanna Barczyk, Edel Rodriguez, Errata Carmona, Beady Eyes, and Alistar responded, donating the original images in the magazine. Kirkwood Printing New York donated the printing.

(Illustrations reproduced in The Common by permission of the artists.)

Below are excerpts from five of the stories. To read the full stories and the other nine, please click here: The Ship Log

It smells like stagnant sewage and like my dad’s car, the kind of stale cigarette smell that you take everywhere with you on your clothes and hair. But instead of feeling comforted, I’m scared. I’m down below, while he steers and smokes some more. I’m freezing my butt off. January is not a good time for boating, especially not on the East Coast. I’m shivering and can’t decide how to get out of this mess; my mind is all over the place. How the hell did I get here, and why me? Why did he choose me, the regular customer at the same old coffee shop in Brooklyn, to ask on a date?  Jesus…

No Enemy But Man

Let loose, they flap, fill, and stretch, holding the breath of Poseidon. Straining, tugging, in a futile attempt to escape their tethers. Tension building on the timber and hemp, bending, stretching, groaning. The behemoth lurches forward beneath our feet, plows through the surf, rolls over the swells, leaving its safe haven, our home, ever farther behind.

So small, the twine and timber, more like twigs, painstakingly rigged together. Dim lanterns, fueled by the lords of the sea, light the hold, a cage, as it seems to have become. Stop, clean the hand, bleeding again, cut when carving its little planks. Pin-sized dowels. Thick gunky glue. The roll and sway of the ship is making a mess of it, as if it knows there is a smaller version inside of it…

I steered sharply to the left, then back to the right, trying everything in my power to slow the ferry down by a large margin. My partner, Captain Adams, and I sounded the alarms. We were approaching the docks with intense speed, unlike the norm. I braced for impact, praying that I would see my family and that all the passengers on the ferry would see theirs once again. And there they were—the docks, made of steel cables and wooden pilings. They appeared to double, then triple in volume. Three, two, one.

Humans aren’t lucky enough to be able to breathe underwater by themselves. Even wearing the suit and helmet, this isn’t a job for the claustrophobic. It actually gets worse as the water above you presses against the suit. (I call it the weight of the world.) Feeling my way through the wreckage of the ferry, I can’t see past my hand. I only have myself to talk to down there, and my mind talks a lot.

The city is booming with industry, yet jobs aren’t always easy to find, well-paying jobs, at least. Laissez-faire is taken to heart. The rich get richer, and the poor have no choice but to get poorer, as they are paid meagerly for long, strenuous, and unsafe work. After working in the caissons used to dig the foundations of the Brooklyn Bridge, I swore I would never go under water…

“Don’t cry, Marie,” I tell myself.  “This funeral is a celebration of a life lived to the fullest by my love. So don’t you dare cry.”

His face is calm as if he were asleep, just waiting for our alarm clock to blare out that Pink Floyd song he loved and get ready for work. I look across the New York Harbor, the waves as calm as the wind on the sunniest days of July, as if made to welcome the angel, my husband, back into the earth. I see the Museum of Native American History, and a wave of memories rush over me.That is where we met. I was young, only a grad student forced to take some bogus class for my last missing elective credit, a culture studies course.  He was a curator of Native American descent who loved his job. Our first date was on this small dory he built himself, the same one he rests in now, only this time his eyes are closed, body painted, feather held close to his heart…

Julia Lichtblau is the Book Review Editor for The Common. Her writing is forthcoming in the American Fiction 13 anthology and has appeared in Narrative, The Florida Review, Best Paris Stories, Ploughshares blog, and elsewhere.