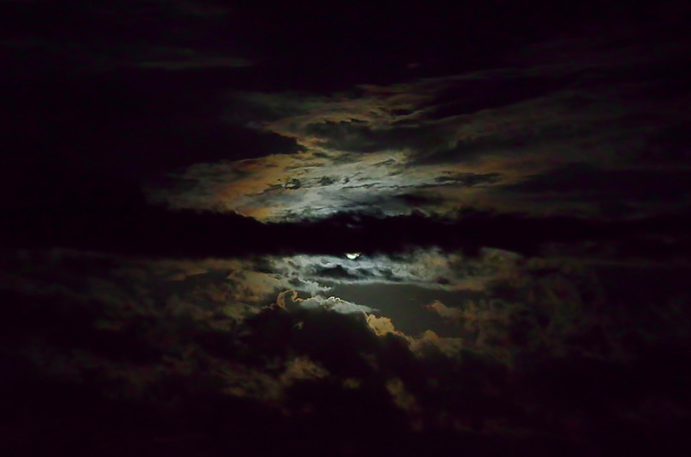 We surged in the moon-darkened
room, between counter-actions,
naked, our spectres clocking
the grey-scale before morning,
flayed and turning in our recently
broken garden, all clay, our peonies,
ghosted, nodding, shall abide,
delicate as this loam-stillness,
our own flesh and blood, sharpened
to brighten and alter the gloom.

Because we passed with the torches
and spoke, the torches spoke
for a time when we waded out
into the crab-season mud, crocus
bags blossomed with their twitching
on our backs, unnoticed, unnoticing
flames, the muted stars caught
in the mangrove, pale and harrowed
low above our heads that would seem,
bowed, to be grieving, moving shadows.

Talons and beaks pushed out
of the soil, ripped wings as well,
more vicious, shining like a seer’s
relics woven into the dirt for us
to decipher, but a door subtly
beating itself somewhere inside
the house, took our attention to waves
revelling at Blanchisseuse one
constrictednoon, when the shades
steamed with our aching voices.

Before and after we were anchored
in the desert of lithium blue,
a cathedral dome frothed on the skyline,
peach-burnt, a reminder the world
was unfinished, this bilious amber
breast retained silence drawn from rain,
rain fallen in the canes, green, painful
showers flooded the culvert, and nightmare
tangled the thorns of a girl’s hair,
an intimacy we pulled apart, together.

Light cloistered thick in the window,
behind, chestnut-dim, the river
transgressed a book, counter-changed,
the book rivered, brackish urging
from our ragworts’ quiet explosion,
burgeoning with the sweet, ancient
resonance of new coins struck
during the daytime and the night
by love’s amethyst, touched
to prevail upon the forfeited mind.

The mirror issued its monster,
Sunday, thunder quietly amended
our garden bed, lilies spritted
into a giant spider by the white table
and chairs, then, at the front threshold,
the cherry tree snowed, planted
by a stranger, the slender limbs
strangely reflecting the aggressively
heraldic branches of another Gorky,
its candescent beauty gripped us.

The lindens at attention reflected
in the lake, witnesses, invisible,
to the sole heron on the stone
lion’s head, and that emblem
became our passion, the bridge
jostled with crowds and the sun
and bicycles fluttering towards Lethe
over Bryan’s Bay’s old rail tracks,
there the bakery’s strong bread smell,
everyday, transported us elsewhere.

A storm leavened the twilight
with woodruff and ushered the cliffs
and sea back to us that golden
afternoon in Buccoo, the orange trees
soldered ripe oranges on the goat path,
the yellow breeze in the curtains
loomed fire, outweighing our rapid
breaths, seamless with the waves,
composed a golden lifetime of pale
light that persisted brighter gold with the moon.

Cassiopeia in magenta light and smoke,
all faces lost on the horns drifting
to Mali, spinning in clouds of dust,
but for one, pallid, alighted
in the halo of its steady dance
like a pollard willow tasseled against
the mortaring-bass storm that, later,
blazed the afternoon with pollen,
albescent as the sandy road we took,
closer to heaven than we had ever known.

Stroke of amnesia from the salt
off the old port, stricken lampposts
stood apart, snagged by wires that
singed memory back to a calico sky, a rotted
boat plying currents to Navy Island,
our urchin-souls looked back
at the insubstantial main and cried
out at clouds so fleetingly ember
they were bees to the lazy-eyed
lighthouse almost lost in the hills.

Carboniferous Ithaca in winter,
wonderfully counter-poised, the garden
blanched into a medieval hush not
even the numerous crows, appearing
and disappearing off the half-buried
fence could pierce, their requiem wings
echoed the summer plague of flies we toiled
to clear, weirdly chronicling what happened
in Tivoli Gardens, in the deep of night,
and the deep night that mirrored day.

When the coals glowed carmine
in the stove and drew us into the silken
dark full of fireflies, something more,
something still better, sieved our
talk, imperceptible as silica-mist
hanging over the yard’s boundary
line, that last elusive fugue bearing
the waterfall’s exhalation, an aftermath
we overheard, not unlike out-living
the chrome moon the clouds spawned.

Ishion Hutchinson was born in Port Antonio, Jamaica. He has published one collection, Far District: Poems

. He has won the Academy of American Poets’ Levis Award and the 2011 PEN/Joyce Osterweil Award for Poetry.