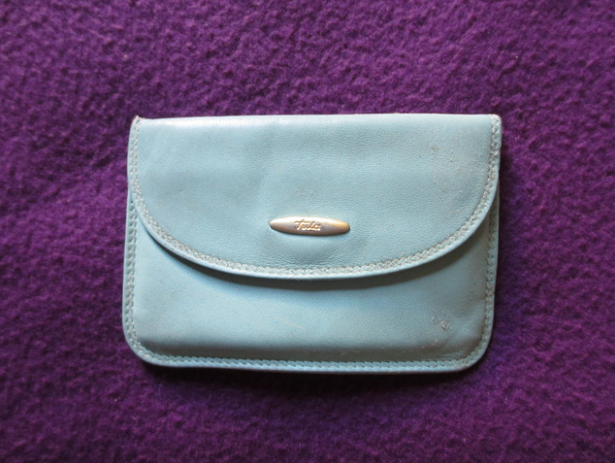 By PETER SCHMITT
It was a little blue purse she had asked for,
my mother, age four, when her father called

from the Mayo Clinic. With a silver chain—
and he had somehow found one in a pawnshop

in Rochester, and if he weren’t so tired—
from the radium and the transfusions,

from the talk of white blood cells, from the drive
itself—then he might have noticed sooner

that he’d left the purse at a small motel
near the Canadian border. And so,

with his family waiting for him, wife
and three daughters, my mother the youngest,

at the lake at Winnipeg Beach that summer,
he turned back, though it would mean many more hours…

She was kept, my mother, from his funeral,
and her own mother allowed no photograph

of him in the house—but my mother kept
the little blue purse, in a trunk she carried

into adulthood, with books and letters
and clothes from her early years. And the trunk,

too big for my parents’ first apartment,
was stored at my father’s plant, where someone

stole it—and the only thing my mother said
she missed was the little blue purse. Almost all

of which had slipped from my mind, out walking
on the afternoon of her death, her body

bagged and crematorium-bound just hours
before, and I had gone a hundred yards more

before realizing what I had just passed,
sitting on a limestone wall at eye-level—

a purse, that someone had discarded or lost,
for all the world a child’s purse, cheap, plastic,

and a light blue. When we were kids we would swear
on our mothers’ lives—what do I swear on now?—

but when I came around again, the purse
was gone, the sky just turning from clear to dusk.

Peter Schmitt is the author of five collections of poems, including Renewing the Vows. He has received The “Discovery” Prize, The Lavan Award from the Academy of American Poets, and the Julia Peterkin Award from Converse College.