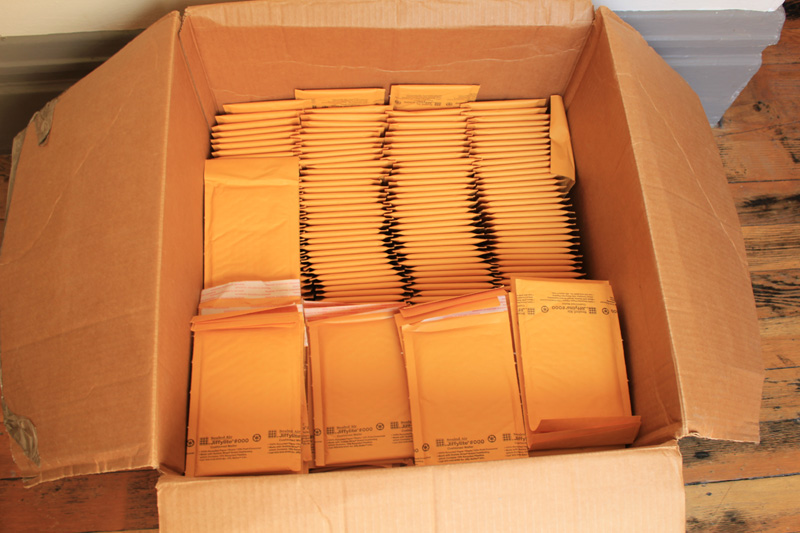 I spend an hour opening envelopes every day in the basement of the American Library Association.  Past the freight elevator and the official mailroom with its mechanized sorting machines is a room that looks like a cage because of the metal fencing that covers its entrance from floor to ceiling.  A door is built into the fencing and a paper sign reading “Do Not Close” has been affixed, tape looped through the wires so that it adheres to the back of the paper.  This long narrow room is divided lengthwise down the middle by metal shelving containing what appears to be every archived publication the Association has ever produced.  I do my work in the back corner at two tables covered in razor marks.

I’m told at my internship interview that Booklist, one of the Association’s review magazines, receives approximately 60,000 books a year but reviews only 8,000 in print or online.  I assume the 60k reflects the number of titles entered into the magazine’s database and not the total number of physical books received, which would likely be at least two to three times greater.  Publishing houses that know the drill send two galleys three months in advance of the book’s publication and then another two finished copies of the same title as the drop date nears.  Some publishers send their sets of galleys or finished copies in separate shipments, attempting to ensure that their title is not lost in the shuffle, relegated to a life of neither review nor rejection.  Self-published books (easy to spot by their pathetic covers—titles rendered in Arial font alongside preloaded clip art) typically arrive alone, just a single copy of the author’s great effort sent out into the void. The majority of this great multitude arrives to my basement alcove by envelope.

It is incredible how the repetition of a singular task hones the attention.  I become fascinated by the variety of envelopes and the ways in which they do or do not acquiesce to opening. Sealed Air, maker of the Jiffy Mailer product line of envelopes, has a corner on the market.  In particular, Jiffylite – with its kraft paper exterior, the color of a classic No. 2 pencil, and bubble wrap interior – appears to be the favorite of the book publishing world.  It becomes my most beloved envelope as well.  Jiffylite gallantly protects the book inside but gives way without protest when I rip it open, gripping it with both hands and tearing its bottom end across and off, its contents sliding onto the table without a need to reach for my utility knife.  I don’t realize its rip-ability at first and try to slice all the envelopes open.  My second day on mail detail takes me two and a half hours.  The utility knife’s dull blade snags and stalls on the plastic bubble lining of the Jiffylite envelopes and I accidentally shred more than one enclosed cover letter.  Pain radiates from my wrists long after the mail has been opened and an editor gives me the contact info for a massage therapist who has kept her own carpal tunnel syndrome at bay.

It starts as an act of desperation, trying to do the mail with minimal injury, but becomes a soothing endeavor over time. I experiment with how each envelope can be opened, taken apart, dismembered cleanly until I have perfected my technique. There is something beautiful about creating a system, a universe, where everything is sorted and opened and eventually lined up on a creaky metal book cart just the way I want.  I rotate the position of the giant blue recycling bin and plastic gray garbage can behind me so that my movements are minimized.  These receptacles for envelope remains grow full.  Every day I can see that work has been done.  The jam-packed mail bin, envelopes wedged between boxes wedged between envelopes, becomes three distinct piles (adult, reference, youth) and then a single cart of a couple hundred books.

The spines of the books on the cart face out and I wonder what awaits them.  Nothing is guaranteed.  There are things that bode well—carrying an imprint from one of the mega, double-named publishing houses or having decent cover art—but certainty eludes.  Even if a book makes it off the mail cart, onto a select truck, and into an editor’s hands, that only ensures that a reviewer will encapsulate it in 175 words.  A paragraph—smartly written, of course—will replace the hours, days, and years that it took the author to write, or even think about writing, this book.  The librarians of North America and beyond for whom the reviews are written only see a sliver.  Granted, it is the potent sliver they need (what the book is about, why it is worth reading, what library patron it is for) but the reduction pains the would-be author inside of me.  When I look at my full, orderly mail cart, I see the opposite of reduction; in my mind each author’s labor pains are audible and multiplied.  I imagine how hard it was for each author to reach this point where their book—Finally written! Finally picked up by a publisher!  Finally bound and printed on paper with ink!—is temporarily residing in the clammy basement of the American Library Association.  I feel the wanting of how much each author wants his or her words to matter.

About five books a day arrive in a Jiffy Padded envelope, a sister product to my beloved Jiffylite.  The Sustainable Forestry Initiative has bestowed a Chain of Custody certification on the Jiffy Padded mailers, an award that acknowledges Sealed Air’s efforts to ensure that these envelopes originate in sustainably managed forests or are made from recycled papers.  This eco-friendly manufacturing process results in an envelope that, on its own, is huggable.  Instead of bubble wrap, which resists force until the POP!, the recycled-fiber batting of a Jiffy Padded envelope is like a thick felt blanket or the deep pocket of a down overcoat.  It actively holds.  It has weight and heft that eludes the Jiffylite.  The exterior is “satin gold” kraft paper, according to Sealed Air, and a red pull-tab protruding slightly from its backside allows for “simple, fast opening.”

This last part is a lie.  There is nothing simple or fast about opening a Jiffy Padded envelope.  On my first day, the editorial assistant training me points and says, “Watch out for those.”  While a Jiffy Padded envelope leaves the sender as a care package embodied, it arrives to the basement in rags—recycled fibers the color and feel of vacuum-packed dust bunnies spew from its lacerations. In the fairly low-risk world of opening books, they are the equivalent of a bomb.  I try to immediately isolate them from the other envelopes, minimizing the cloud of fine paper dust that grows bigger and bigger every time the Jiffy Padded is touched.  I hold them over the recycle bin, as far away from my body as my arms will reach, and pull the red tab.  This is the real cruelty: the padding of each envelope could be punctured from the inside or outside, and I don’t know until I pull the red tab whether another explosion of paper fibers awaits.  Even if by some miracle of the mailing gods the envelope has remained intact, the pull-tab only creates a slit two-thirds the length of the envelope, a hole too small to get the book out.  So I am forced to rip the envelope myself, consenting to cover both the book and me in a film of dead trees.

None of this would matter, except that I start to hate not just the Jiffy Padded mailers, but also the books inside them.  I wish terrible things upon these books and their eco-conscious publishers.  I want these books to fall through the cracks, fall off the cart by accident, and never be reviewed or rejected.   I want them to hang forever in this basement limbo.  I start to feel that the books deserve this fate.  They have so greatly garnered my attention, pulled me out of my little universe, that I now believe they merit none at all.  They deserve the worst fate that can befall a book: no response.  For every author’s word, born in isolation, waits hungrily for the day when its promised host of readers will come; and, though no author wishes for a biting review or stock rejection, at least both of these lesser fates reveal on some level that the author has been read.

When I am away from the mail, away from my basement nook, I wonder half-penitently whether my hatred somehow attaches to the book itself.  Does my animosity linger like the dust in the ridges of its paper, the crevasses of its binding?  Can a summer intern truly affix emotion to an object and its destiny?  Part of me wants to know that this transcendence can occur, that I am preparing these books for the hereafter and that whether I wish them well or ill matters.  But the other part of me, the part of me that imagines my own someday-book being sealed in a Jiffy Padded envelope and sent off to a basement mailroom, is less eager for such certainty.

Amye Day Ong is an MFA candidate in Creative Writing – Nonfiction at Columbia College Chicago. She received her MA in Religion from Yale University.

ShareTweetEmailPrint
2014 Amye Day Ong Essay
The Word and Its Afterlife05.27.2014