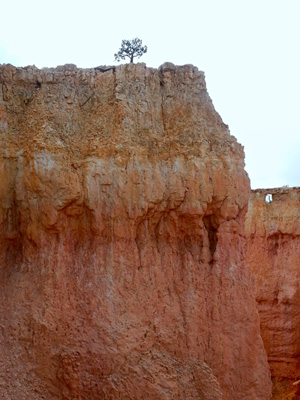 The $14 manhattans were terrible. We drank them anyway. Las Vegas, Lost Wages, whatever you call it, it was the gateway to our West(ern vacation—three canyons, eight days). The next morning, we ate gigantic omelets beneath a mirrored ceiling, amid fake trees lush in fake pink bloom, pulled out the map and headed through the wide open landscape: straight road, big sky, dry scrub, tumbleweeds.

When I first moved to Boston, I missed the spread of the Midwestern flatlands. I missed the floodplains and fields and the calm at-a-glance experience of distance. The northeast is, of course, a much more congested place—literally, metaphorically, both. Here, the eyes focus in and around enclosures and obstacles of space—sightlines shortened, the composition contained by the stock characters of the urban landscape. There is the ocean, too. You can wind your way down a paved cow-path, and the eyes at last reengage with a sense of infinite opening. Looking to sea from shore, there is no obstacle.

The horizon is that line at which earth meets sky—or appears to. It’s the frontier, the border separating and joining the two. The presence of trees, buildings, mountains, or other irregularities and obstructions create only an apparent boundary-line—a false ending. But, on the open sea, a great plain: horizon (real, true, celestial). This is mathematics and meeting points: the earth’s surface, a cone, the eye. The satisfying meeting of expanses, a division of parts.

At the south rim of the Grand Canyon, the vastness eludes any real perception of depth and dimensionality. Hello, postcard. We seek out a place not too overrun, looking to escape the whirr of rapid-fire panorama shots of this moment—then this moment, then this one. The walls of the canyon (these snapshots of geologic time) shift from reds, to purples, to gray. It’s in this changing color that we really see the space. The sky darkens to, then passes sunset. Dusk is the darkest stage before full-on night. Somewhere beyond our sightline the sun shifts degrees below the horizon until artificial light is required. 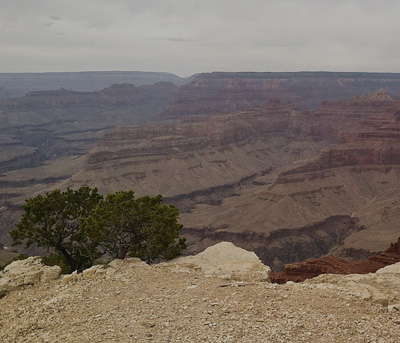 The next day, in overcast daylight, we pick our way along the rim, averting our gaze from (fellow) tourists as they serially pose on ever-more-precarious ledges. Eyes release, scan. This distance invites both a wide-eyed focus and detailed ingestion: the curling strand of white coming off every robust green spike of the plant at our feet, the occasional wisp of red flower amid the dust, dirt, and muted shrub greens. In the shrub, the subtle fluctuations between green and gray; in the trunk of an unlikely tree, a swirling grain. The raven, so boldly scavenging for food beside the snack bar, reminds us of the cat back home (likely doing the same).

We head east, descending in elevation as the road divides the landscape. It is harsh and inhospitable. We expect to see not a person—but there is one, making his way over the parched, rocky hills from where to where? At 60mph he’s gone in a moment. We circumnavigate the canyon—southeast, north, west. Within a few hours we’re in the lush green of a river valley then standing before Bryce Canyon’s otherworldly ombré of limestone: oxidized orange-red to dirty white. 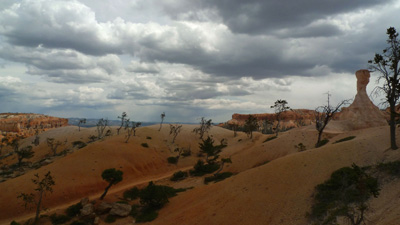 The plant life seems unlikely. It’s hardy and delicate at once, and visually pleasing— contrasting in color, texture, and form with the rolling land and craggy formations. Every overlook offers a new vantage of the spires below. From Inspiration Point I’m struck by the uncomfortable feeling that these pillars (so numerous, I’d not realized) are advancing toward us in some sort of martial formation. Though nothing could be further from the truth—if anything they’re in retreat, erosion always removing, reshaping. Reductive process. The twisted limber pines improbably hang on. A man walking along the very edge of the rim stares at the phone in his hand, stumbles, and slips—just a little. 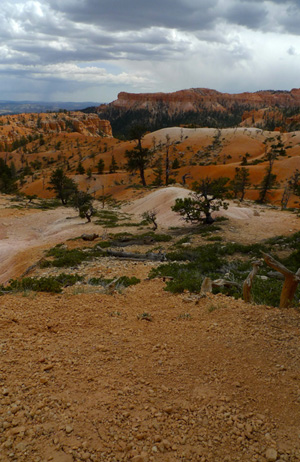 In the bottom of a canyon or the middle of a city one must crane to see the sky. The sun passes the apparent horizon anticipating dark but leaving a bright, indirect cast. After sunset the canyon walls blacken; bright stars are visible for the price of a little neck/back pain (lean back, look up). In the city the walls remain lit, the light—diffuse, latent—masking. Where Zion Canyon narrows, the morning sun won’t breach the walls to touch the ground until nearly noon. One can only look up—at the stunning rock wall, the patina, seeping water, hanging gardens, soaring ravens and swallows—for so long. Anatomy being what it is, the staring-up posture takes its toll. So much the better for the smaller scale, the groundscape: every new squirrel, each provocative bloom. On the banks of the Virgin River, a squirrel, plagued with fleas or some other wretched irritation, incessantly, adorably scratches and bites at his body. We stop and watch. The mule deer make their way among the trees in precious camouflage. 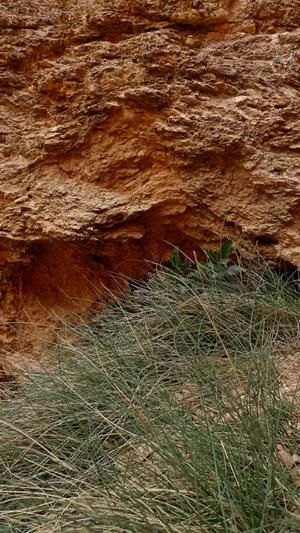 This western landscape demands attention—its air thinner, drier, filled with new smells, its creatures and plant species that do not live where I live. Being ‘out of town’ means the body and mind become sensitive to the surroundings on macro- and micro-levels. This is not my place. My instincts are (likely) useless. The eyes must shift between panorama (the broadness of the scene) and close-up (every curve and texture). I will take only a handful of photographs—useless to capture the data I want to retain.

At the bottom of the Grand Canyon, the wind whips sand in our faces as we hold our hats to our heads and our heads down. In calmer hours we stand in the Colorado River, face forward into the warm sun’s slanting light. We walk up toward a burn site but are stopped before we get there by the cacti in stunning bloom—bright yellow petals, pink flowers, the thick green skin of the plant and the dusty ground all around. On the flat of a soft ridge above the water, we wind our way between shrub and cactus. Look up at the scale, then down again. At dusk, the bats begin their flit and swoop. The stars (bright and comfortably visible as I lay staring up) are a blur—my imperfect eyesight. 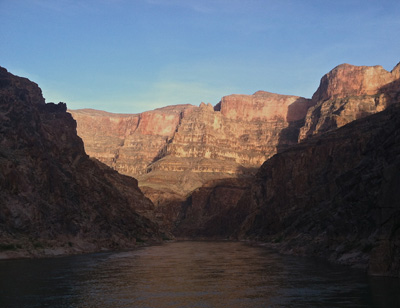 I open my eyes to a cool paleness in the sky, take in the full openness around me—a far cry from the cozy congestion of home. Dawn opens morning twilight. Becoming day, the sun hangs just below the true horizon, far below our horizon as seen from the canyon floor. Dawn should not be confused with sunrise (true or apparent), though one may see, approximately, where the sun lies waiting. The sky will slowly shift its colors, the walls brightening from shadow. The moon, hidden behind canyon walls in the night, will rise pale white throughout the morning. Big-horned sheep will pick their way along the river with their little one. Carrion-feeders will circle far, far overhead. At a spring, we will touch rock (travertine) in its pre-hardened, gelatinous, oyster-esque state, sensing in-hand the stretch of geologic time.

We end where we started, approximately. Las Vegas (lost wages). In the desert, against the desert, counter to every landscape we’ve been in these days. Every sightline infinitely interrupted: lights bright, dim, flashing, buildings ever-mimicking other buildings in other places. A state of constant distraction. We coast along patterned carpets, escalators, take-in the complimentary oxygen, collapse into a couch with our drinks (gin, this time) to sit, to look. We make our way back along The Strip. Two young girls on the sidewalk perform a song I can’t remember with boombox accompaniment as their mother (I presume) watches disinterestedly nearby. The lights’ glare surrounds us. Dusk is the end of twilight.

Elizabeth Witte received her MFA in poetry from the Bennington Writing Seminars and is Web Essays Editor of The Common.