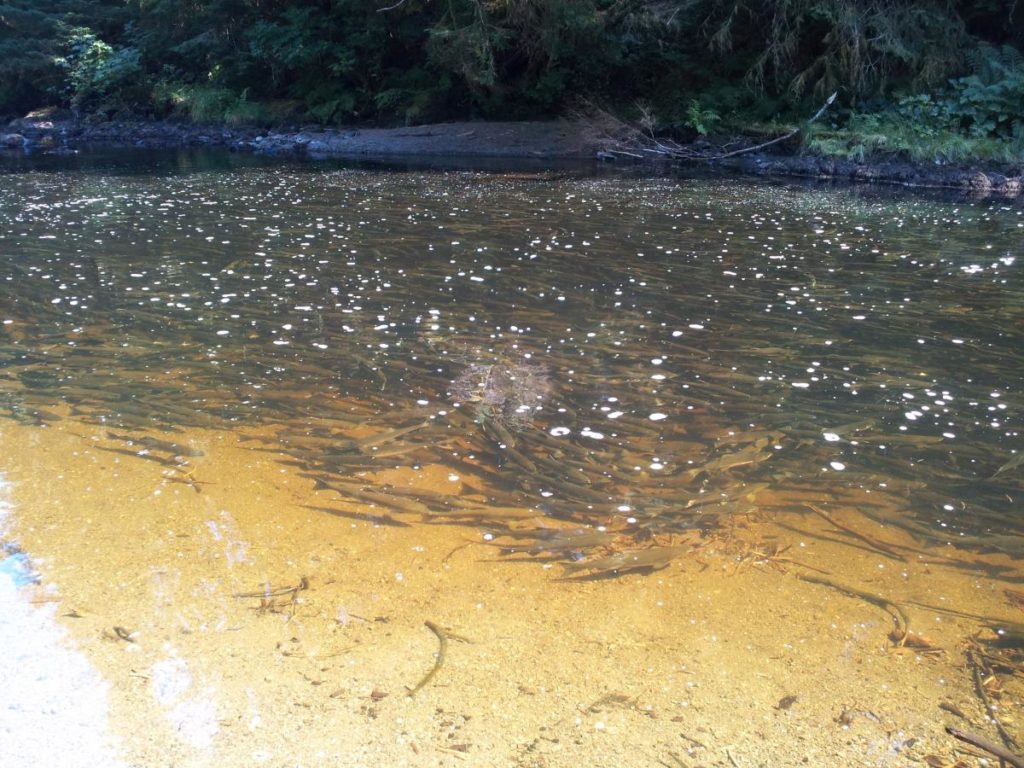 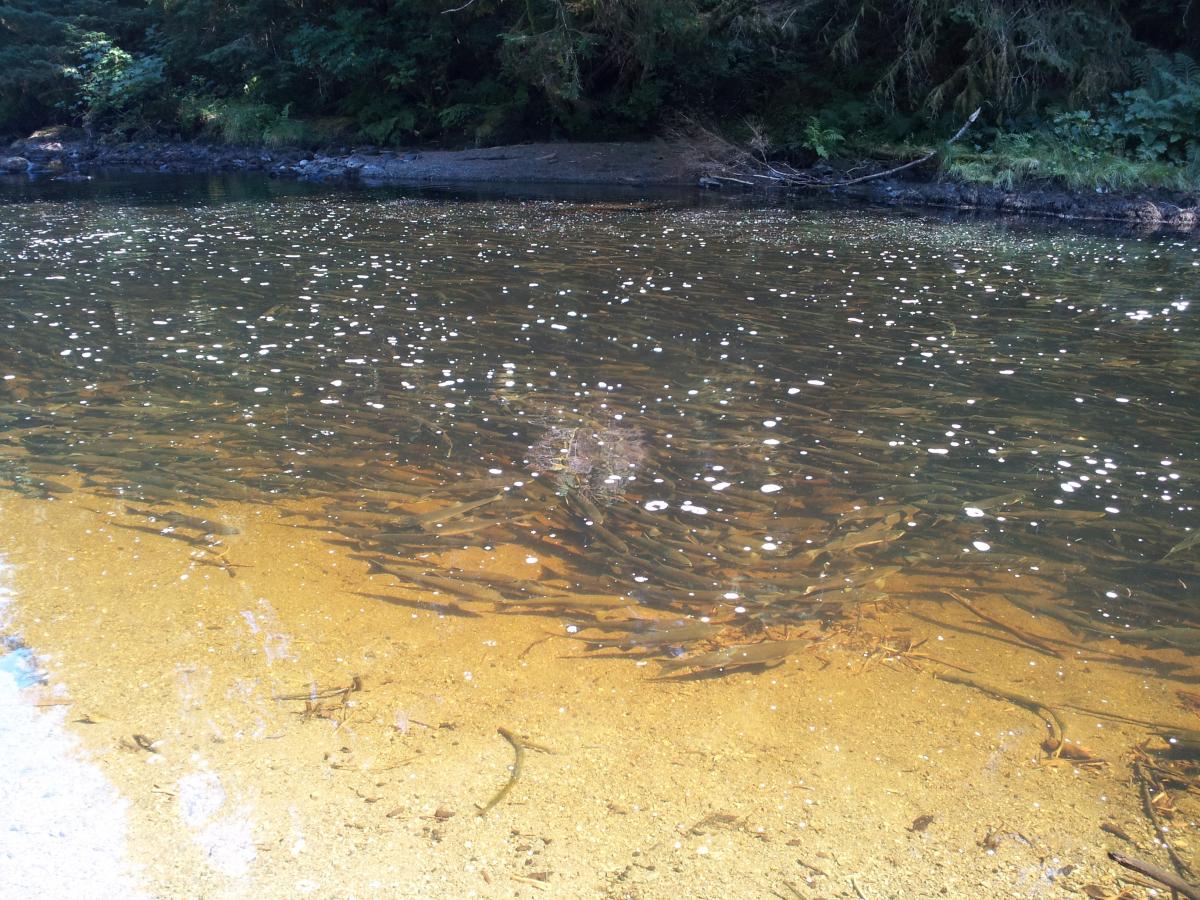 We saw them first from a small knoll among the massive spruces and the cedars. They darkened the water of the creek, turning it reddish black and opaque where it widened and slowed among the rocks. “Are those all fish?” I said.

No answer was necessary. In the light they shuddered a little, shifted, displaying the torn corners of their dark mass. Individual animals moved and split away, changing position against the pale sand. The sun struck them perfectly, slicing and ignoring the water’s surface, illuminating the shapes below.

Fish: thousands of them, humpback salmon, on their way upstream from the sea to spawn. They had gathered in a large pool just downstream of a set of rapids, packing it completely. Here they rested, gathering energy for their journey onward to the shallows upstream to mate and lay their eggs. Lazily, they wiggled back and forth in the gentle current. But every so often a wave of inexplicable and abrupt movement traveled through the thick black school of them, rippling across its surface, all fish caught in its sine wave undulation shifting direction before settling into a new space.

My companion and I were walking the banks of Eagle Creek, on Prince of Wales Island, Alaska. We’d taken a day off from our work – environmental monitoring of a nearby road construction site – to explore the wet, mossy trees and thick peatlands of the Tongass National Forest. The place gives a fragile feeling: gentle mountains of the islands bathed in a mild, temperate climate and quiet waters of inlets and channels, protected but also frowned upon to east and west by the severity of snowcapped peaks and the furies of the open sea.

We dropped down from the hillside onto the pebble beach beside the fish. We came on slowly, afraid of frightening them. But they seemed uninclined to spook. Focused on their internal drive, their strange destiny, they gazed blankly forward, waiting, swaying their thick salmon bodies in their uncountable thousands. Their unwinking eyes held the mystery of their urges.

I’ve never seen so many fish, and may never again, not packed in a single space in such concentrated mass. In our more ordinary suburban lives, we know such scenes only from television, from the Discovery Channel or David Attenborough or that old and wonderful series Wild America. It brought to mind a film I saw, years ago now, at the Seattle Aquarium. I’ve failed to find it since, but if memory serves, it was called Shifting Baselines. The film recounted the story of salmon’s decline in the Pacific Northwest. Its scenes – in jerky, black and white old footage – showed a hardly credible bounty. North American Indians stood on wooden scaffolds they had built along the coast of the Columbia River, and lowered, by hand, long-handled nets. Each dip of the net garnered a fish. Every single dip. That’s how many fish there were. And what fish! Some stretched from a man’s chest to his feet. These were Chinook salmon, the Northwest’s largest, also known as the King salmon, that can grow to 100 pounds or more.

Indeed last fall the river hit a record 1 million fish. It sounds like a lot, and in fact the Pacific Northwest still offers delightful viewing of salmon in many of its rivers and creeks. But scientists estimate that runs in Oregon’s rivers may be only three percent of their historical size – putting an original Chinook run in the Columbia at a startling 33 million fish. We’ve forgotten what a real salmon run looks like, at least those of us who live in the lower 48. In the words of fisheries scientist Daniel Pauly:

Each generation … accepts as a baseline the stock size and species composition that occurred at the beginning of their careers, and uses this to evaluate changes. When the next generation starts its career, the stocks have further declined, but it is the stocks at that time that serve as a new baseline. The result obviously is a gradual shift of the baseline, a gradual accommodation of the creeping disappearance of resource species….

In other words, we compare losses we see to what we remember from earlier in our life – not to historical numbers, which are much greater. A shifting baseline of comparison. Now you see them: now you don’t.

As we gazed down on the humpback salmon, gathered in their thousands, that’s part of what made them so special. They’re a reminder. Most likely, the humpbacks too have gathered here in greater numbers in the past. But seeing them like this, in a pool that could hardly have held more of them – that’s what the Pacific Northwest used to harbor, all over. Perhaps long ago even the urban Northeast, where natural salmon runs have declined to almost total nonexistence, looked like this.

We stared at them for a long time. We even tried to take a short swim among them in the deep pool. But they eluded us. I paddled slowly through the pool, trying to float, to stay as still as possible. Everywhere I drifted, though, the fish swept away like a cloud of snowflakes, or a pile of dust under a breath. I never touched a fish. Their inscrutable aims, their uncountable numbers, their unknowable future: all slipped away from my fingers, like a magic trick.

Naila Moreira is a writer, journalist, and naturalist living in western Massachusetts.  Her journalism, nature essays, and children’s nonfiction have been published in The Boston Globe, The Seattle Times, Science News, The Common Online, and other venues. She works at Smith College as a wriing instructor at the Jacobson Writing Center and lecturer in the English department, and also teaches science and nature writing in Smith’s Summer Science and Engineering Program for high school girls.