A few months ago, while walking home from the subway in my Brooklyn neighborhood, I noticed a change in the sidewalk — four of the white cement paving stones had been replaced with darker, bluish-gray stones.There had been a lot of construction in the area, and at first I thought they were simply new stones, not yet faded to match the surrounding sidewalk. But when I got closer, I saw they formed an artwork, engraved with the silhouette of a young, leafless sapling. The etching was meant to approximate the shadow of a nearby street tree, although that tree, now in full leaf and several feet taller, was throwing its noticeably longer shadow in the opposite direction.A text at the bottom of one of the paving stones revealed the name of the tree, the date and time when the tree shadow was cast on the sidewalk, and the work’s title: Timecast. The tree I was looking at was two-and-half-years older than its shadow, and much changed. 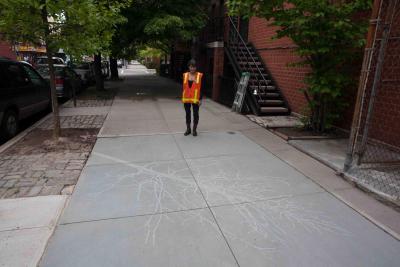 “The silhouettes are like footprints, the kind you take of a baby at birth,” the artist, Nobuho Nagasawa, told me. I visited her Chelsea studio, wanting to know more about Timecast and what inspired it. Nagasawa, an interdisciplinary artist whose work is most often installed in public spaces, said she had originally come up with several other streetscape elements, but ultimately decided that one simple idea was best. She wanted an artwork that pedestrians could encounter and make sense of on their own, without guidance.

As I learned over the course of subsequent walks home, the bluestone artwork I saw was one of six Timecast trees located throughout the Columbia Waterfront District, a small neighborhood sandwiched between Brooklyn’s industrial waterfront and the BQE highway. For many years, this area was overlooked, but with the recent construction of nearby Brooklyn Bridge Park, and the New York City greenway (a biking and jogging path), it has become livelier, attracting new residents, as well as restaurants, bars, and retail stores. The artwork, commissioned in 2004 by New York City’s Office of Cultural Affairs, received a “Design Excellence Award” in 2006.  It took over seven years to complete, and over the course of the project’s development, Nagasawa was struck by the neighborhood’s rapid expansion. Her project took on new significance as she realized that the growth of her trees would be a way of marking time in a place that was changing more quickly than it had in years.

“All the work I do is site-specific,” Nagasawa said. “With Columbia Street, it was the change that interested me…even between 2004 and now, there is a big change to the neighborhood. I like to find stories and recreate stories to the site, to give them meaning.”

Each of the six trees represents a different species that is indigenous to New York, and Nagasawa chose their locations with care, wanting to pick “congenial” sites that would have meaning to local residents and perhaps bring comfort. One tree is positioned outside a community garden, while another is outside of a residential treatment center for the mentally ill. In another case, she chose a somewhat barren spot, a little-used stretch of sidewalk adjacent to a shipping yard, a place where she felt a tree was needed. But this strategy backfired: after just three months, someone cut the sapling down. At that point, Nagasawa had recorded the sapling’s shadow, but had not yet created the bluestone artwork. She decided to turn the bluestone into a kind of tombstone, adding “IN MEMORIAM  3.21.2011 — 6.21.2011” above its timestamp. 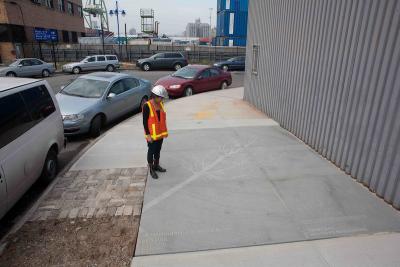 The disappearance of a sapling is just one of many hundreds of disappearing acts that occur every day in New York, a city notorious for its unsentimental attitude toward change. A storied restaurant or business may be mourned in print and conversation, but its physical presence is quickly erased. Buildings are efficiently demolished; empty lots suddenly occupied; old facades stripped bare to provide a canvas for the new. Nature takes its toll, too. Without warning, buildings will suddenly give way to the laws of gravity, pulling away from their moorings and collapsing into rubble. Lightening storms sweep through, striking trees and church spires, and throwing debris onto the sidewalks — debris that is soon swept away by street cleaners.

Timecast is evocative of the many ways New Yorkers try to mark time against these assaults: initials carved in sidewalks and tree trunks, graffiti in hard-to-reach places, capstones at the bottom of buildings, and of course, the elaborate “used-to-be” stories that even the greenest, shortest-lived resident can’t help telling. I was here, they all say.

Nagasawa’s Timecast is an especially clever marker of time’s passage, since the shadows of trees function as sundials over the course of the day. The cool sidewalk shadows of early morning are echoed by the long walking-home shadows of early evening. The tree shadows are timepieces within timepieces, a reminder that city life, no matter how fast-paced, is made up of the same days, hours, and minutes as anyplace else.

Hannah Gersen is the Dispatches Editor of The Common. Her fiction has appeared or is forthcoming in Crab Orchard Review, Granta Online, North American Review, and The Southern Review, among others. In addition, her journalism and essays have appeared in a variety of publications including The New York Times, The New York Observer, and The Millions. She lives in New York City.