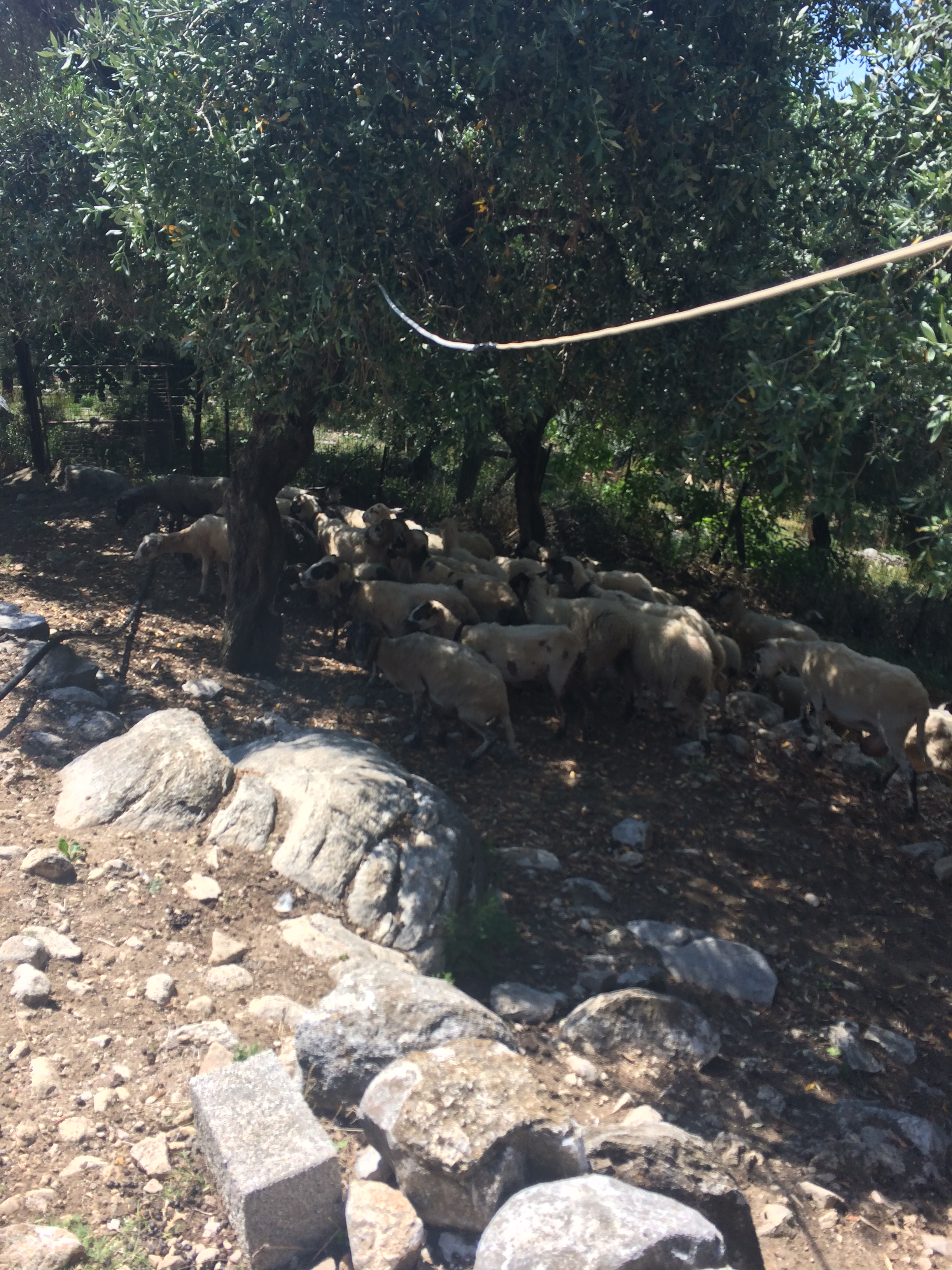 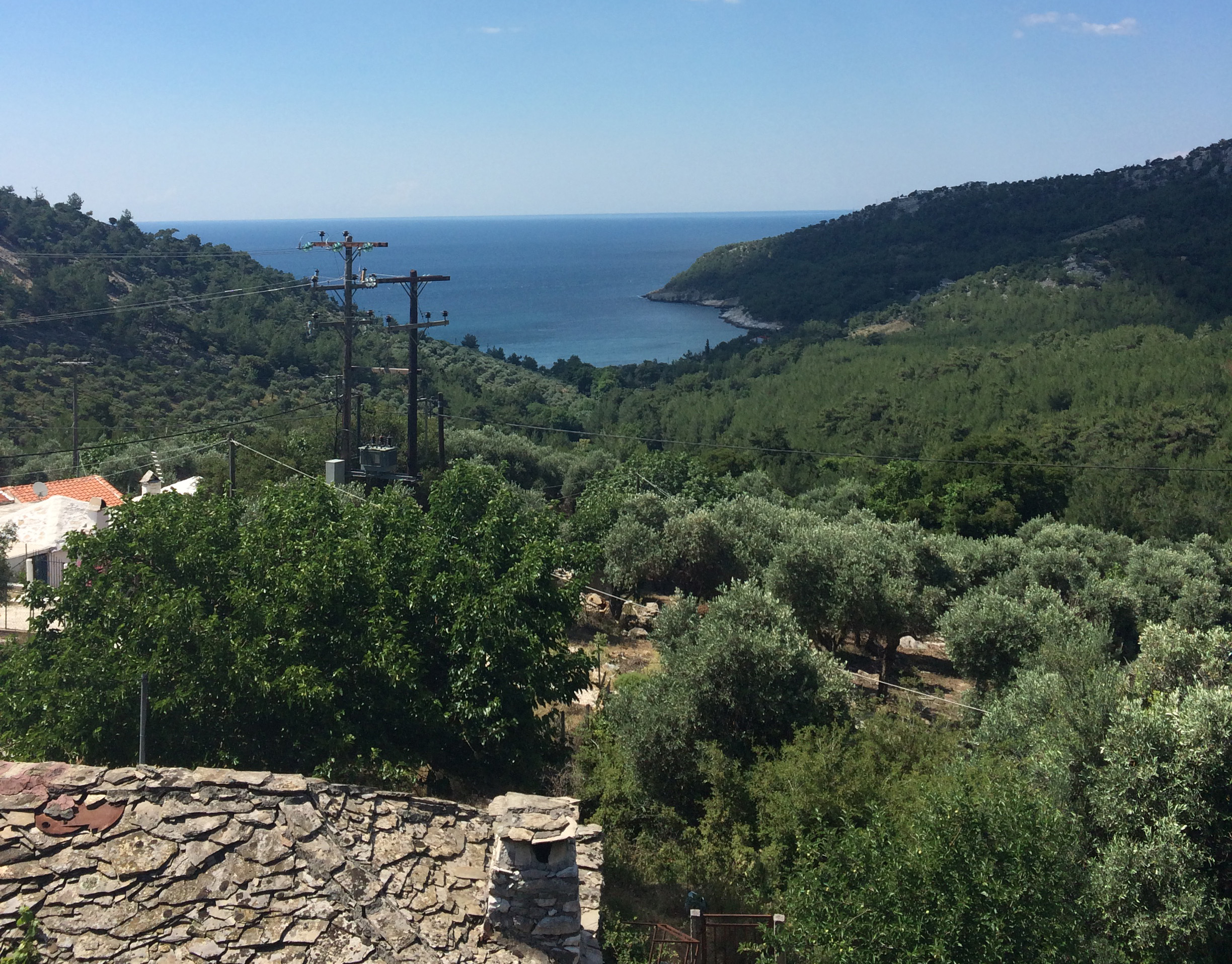 We walk back onto the road and down towards Niko’s house. The herd of sheep follow us and begin to run up the rocky dirt path. The island whispers. Trees sway above, letting sporadic splotches of sunlight warm the road, pierce the ground, looking like a bundle of rocks landing on the Aegean’s surface. Tiny figs dangle from each branch, growing. I turn to look at the free animals as they hurry to push by. Some get trampled, stuck and pinned between a bigger body and the half-opened fence separating the den from the road. Others squeeze through the tiniest of crevices. They all wiggle themselves out and soar together. They cheer in unison, ringing their bells up the mountain. They don’t have to worry about financial crises.

The group enters Niko’s courtyard. Niko is a shepherd, a hospitable voice heard at the restaurant attached to the pension we are living at for a month. Thasos is the location of Writing Workshops in Greece, a cohort of writers led by Christopher Bakken; a non-Greek poet baptized into the culture by his devotion to the beautifully tragic backdrop of this country. A chained dog barks at us in protest.

Den eisaste ellines! I imagine the dog saying, questioning the identity of the strangers creeping through the area he is bound to. 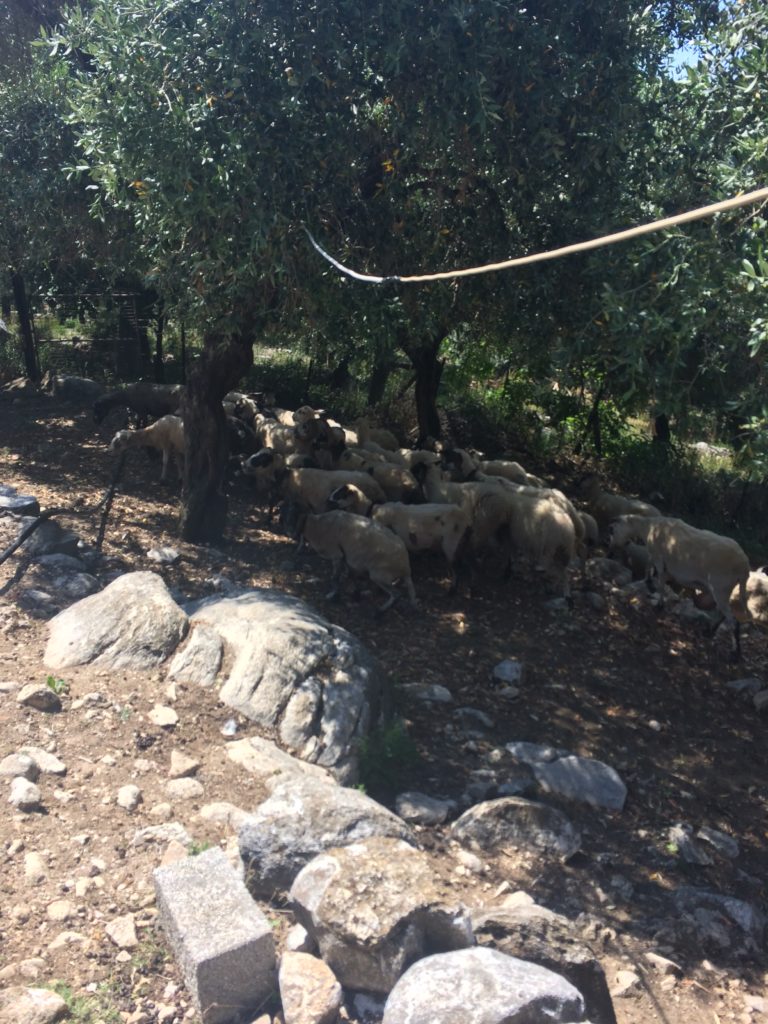 I want to raise my hand, tiptoe towards the barking, and assure him that I am Greek.

Christopher trails behind the shepherd as we follow him up to his balcony. Vines with pebbles of green grapes hang to our left. Not yet ripe. Niko hobbles a bit, wounded from the constant kneeling to milk his sheep. The same milk used to make cheese and yogurt sold around the island. The dog continues to bark behind us, unconvinced. Niko’s steps are slow but loyal. One. Two. One. Two. Stopping briefly at each level. He holds onto the railing but points towards the back of his house at a small wooden hut. One. Two. One. Two. I walk behind him and he speaks to me.

As the only Greek student in the program, I’ve spent a couple weeks translating now. For my new friends, those I’ve traveled around the small northern island with, searching for inspiration, and a grasp on why I have returned after seven long years away from the country my parents were born. For those who only speak Greek, the locals and restaurant owners and producers giving birth from the soil I planted bare feet into as a child.

“That’s where they make the tsipouro,” I turn and tell the group, pointing to, hopefully, exactly where Niko does.

Every winter, the kazani is fired up and dark grapes are sifted through the still to be crushed. The liquid that’s produced is used for wine. The hard remnants for tsipouro. After sitting for a couple days, the residual parts of the grapes are fed inside the kazani to be distilled and heated at a monitored temperature. Once the tsipouro is made, it is left alone to mature until spring, where it is served at Archodissa and other restaurants around Thassos.

From Niko’s balcony, we see a legion of olive trees protecting the Kleftoyiannis mountain. Today they are calm. Like the sea in the distance, an ironed light blue bed sheet. Niko pours us shots of the anise-flavored brandy. He places them in a circular metal tray and begins passing them around.

The entire cohort is hesitant to grab one. It’s only 11 in the morning, but Jenny does and then flinches her head towards me. Nothing needs to be said. She knows I’ll finish hers.

“Efharisto,” she exclaims. “Thank you.”

Seven years is a long time. I forgot. I often question my Greekness, as if my long last name is something I was born with and not something I earned. Translating helps me reestablish a lost identity. And now that debt unfairly defines theirs, the locals attempt to do the same. It’s been nice. A reminder. The connection between both my worlds. The everyday in New York I left, to the unfamiliar familiar I long for.

The shepherd’s words cheer us louder than the singers playing their bouzoukia on Wednesday nights, inducing our linked arms and stomping feet, leading to our “opa’s!” and “bravo’s!” concluding with our clapping, our wiping of sweat, our relief, after another successful round of hasaposerviko dancing. Louder than the concerns of those who live here. Of those who don’t, that still cry when the octopus are hiding and there are no barbounia to catch. Louder than my translations, the way I tell Jenny to pronounce the alpha’s in the word agapi. To roll the gamma, and how the accent rests above the second Greek “A.”

Greece, my love. I miss you always.

And now helping everyone hear what I hear, feel what I feel, letter after letter, syllable after syllable, this home, my home, becomes even bigger.

Jenny hands me her shot. Never too early for me. My lips grasp the glass and open slightly. That’s all it takes to let Greece become a part of you. To taste it. One sip at a time.

Demetri Raftopoulos received an MFA in Creative Writing from The New School. His writing has appeared or is forthcoming in Under the Gum Tree, Prairie Schooner, The Good Men Project, Cactus Heart, Critical Mass, and more. He is an editorial assistant at Under the Gum Tree and a reader for Slice Magazine. He currently lives in New York and is eagerly awaiting his next trip to Greece.

ADAM DALVA
One of my life’s regrets is skipping the Cihu Memorial Sculpture Park when I was in Taiwan. ... I spent a week wandering Taipei… but all along, I was thinking about Cihu. I’d researched the park before my trip, but my host said… he’d rather show me the art and night-life of his city. I was twenty, night-life susceptible.

In the Garden of Invasive Species, I Offer Gratitude

JENNIFER PERRINE
How a dunk into scalding water slips / the skin from a peach, leaves it unfuzzed, slick / for canning. How the trick to shucking corn / is one clean jerk. How jars of beet brine turn / eggs to amethysts that stain my fingers, / my lips.