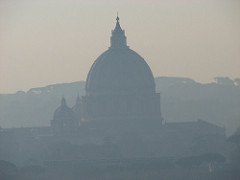 By the end of the summer of 1943, a stretch of time that had seemed to me unbelievably long and even more so in my memory, a good-sized colony of strangers had arrived in town.

Then it emerged they were Jewish.

They’d found lodgings in several houses and one of these families had come to live near us, we shared a courtyard.

We would never see anybody, however, except for a girl who had to take

I used to run into her by chance on the road or near home.

She must have been fourteen or fifteen. She had fat braids of hair on each side of a face that was serious, perhaps sulky.

I started greeting her and she answered back kindly, without showing any surliness. With the passing of the days I realized I was looking for these encounters, which always seemed casual.

One evening we saw the whole family pass by, the rather stout father, the mother and a certain number of kids, among whom the girl must have been the oldest. They occupied the middle of the provincial road, and they were holding hands.

That was the only time we saw them together, and also the last one.

It was said they’d crossed the border, which was a few kilometers from us.

I however had seen her just the evening before, and we’d exchanged a few words. I’d had the impression she wanted to say something.