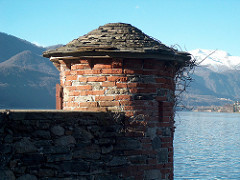 Of the few walks we took together, my father and I, I recall well the one to the Torretta. Having loaded our backpacks with food, which consisted of bread and bresaola, we took off at a good clip.

The Torretta, a medieval tower probably for observation, was tumbledown then, and has now vanished.

Until the Forties it still stood atop one of the mountains soaring above the plain of Erba.

We were walking in silence, I was used to the silences of my father, who had lost the good habit of addressing me except to give orders.

That was a fairly common custom around us.

We finally arrived at the Torretta and right at its base took out our food.

My father cut the bread with a knife but, while slicing a lemon in half, deeply injured his fingertip.

He spoke a loud Ahi! and tried to make things nice and better. He attended a few minutes to his wound as the blood was exiting profusely but then, once the flow had ceased, we resumed eating.

After that unexpected interruption the silence came back. It would last til our return home.