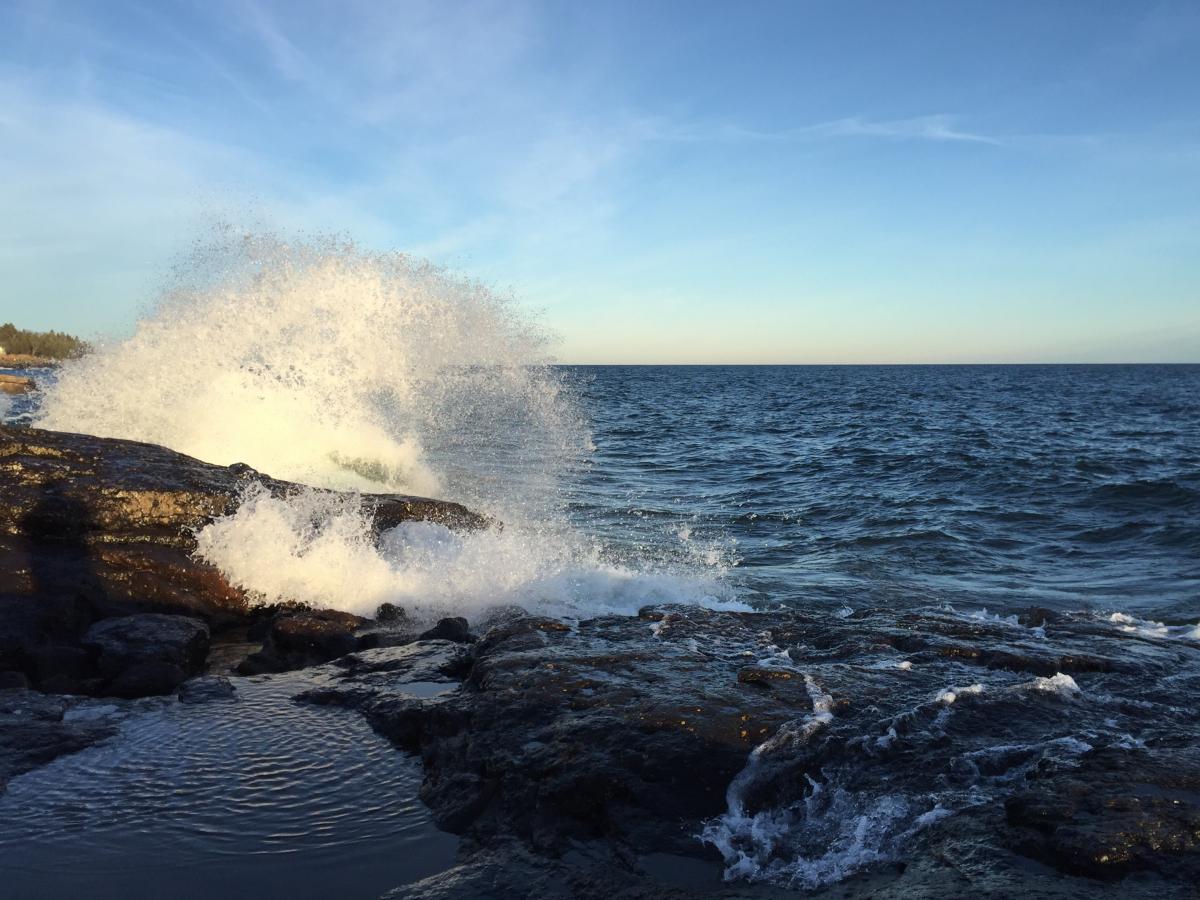 We booked three nights but stayed four. We traveled in-state to save money but spent just as much as we might have on flights to the West Coast. It was November. Going against all reason at our latitude, we headed north.

They call this wind-whipped season on Lake Superior along Minnesota’s North Shore “the gales.” It follows fairly quickly upon the turn and drop of leaves. It helps usher many of those leaves away. Visitors are often turned away by these colder months. Room rates decline. A good number of businesses are open only a few days per week.

Superior, though, is always there, thundering away against the bruised, rocky shore.

We could say it was our daughter’s young age that made us think to go elsewhere or nowhere at all in colder months—Saint Paul gets cold enough—but even before her we hadn’t been the sort to travel north too long after Labor Day.

Maybe this year was different because it was the year that, without intention, we’d kept our circle of travel so close to home. We’d taken our annual trip to Kansas City, but beyond that our ventures had largely been within a four-hour drive: three summer trips to the cabin in Wisconsin and one summer trip with the larger family to Brainerd.

As November approached, the year’s general stress of work, finance, and obligations fulfilled or yet to be fulfilled nagged at our thoughts. Suddenly we weren’t as patient with one another. We made less healthy choices about what we ate or drank and exercised less. We were developing cabin fever long before the winter days of legitimate confinement had arrived.

We hadn’t been to Tofte in a couple years, but we had long talked of going back. When a deal to see the gales arrived in my wife’s email, Erin took it. 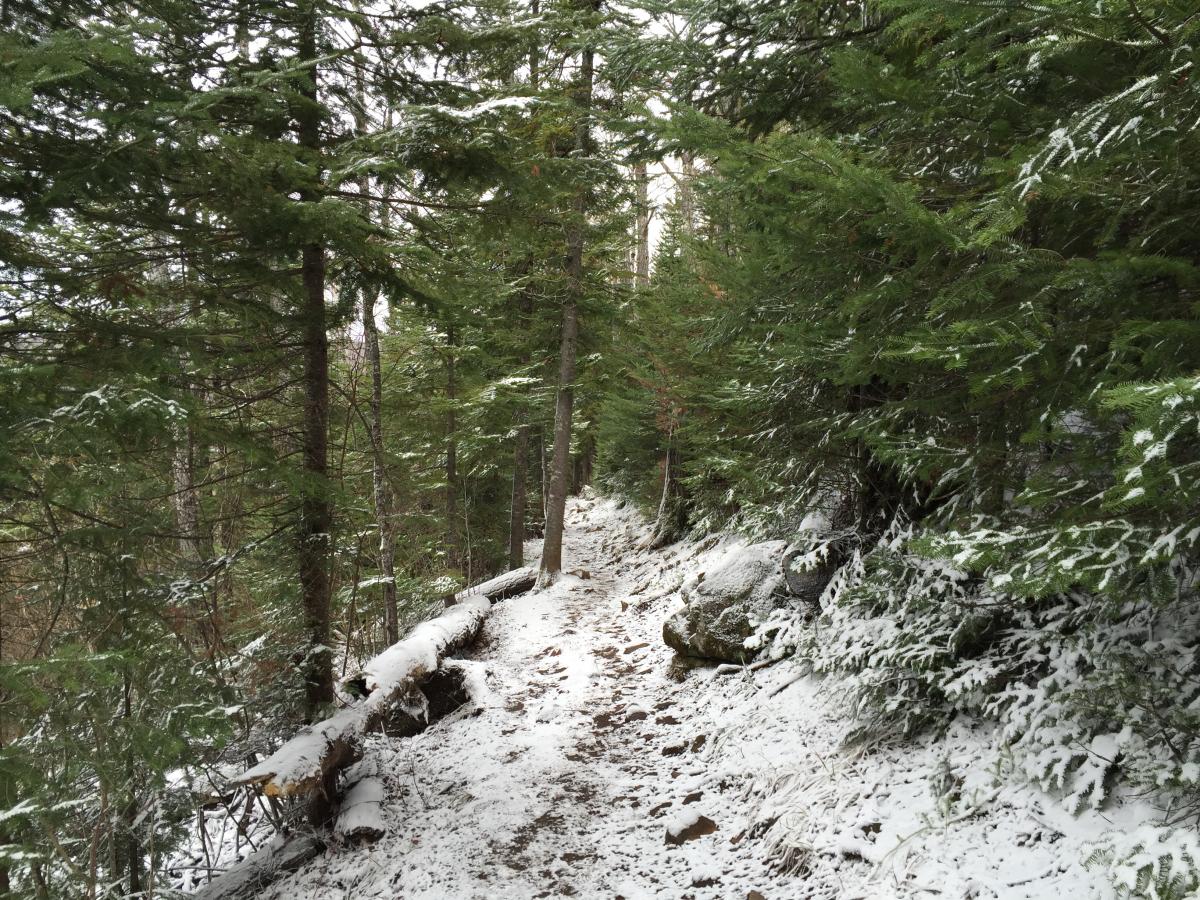 It snowed for us in Tofte. The wind off Superior snapped at us, and we were going to have to sequester ourselves in the rental a bit. Yet, it was beautiful. It was freeing.

We brought very few toys for our daughter, Freya, who was scarcely four, but she didn’t need them. She enjoyed a little art, but all in all was content to watch the fireplace with us. We settled into a routine of having her lie across us at night as we sat on the couch. She went to sleep that way, watching the fire flicker and listening to its crackle, which we enhanced with the addition of a white noise machine’s crackle setting.

Erin and I sipped wine. I stole time on the back deck to admire the brilliance of the stars and marvel at the furious sound of the lake, which was only 30 feet away but unseen in the darkness.

During the daytime, we swam at the indoor pool and found windows to visit Grand Marais just 30 minutes further north.

Things were not entirely pastoral. The fits of a four-year-old and the compounding stress in the reactions of the parents rankled some moments. Each day, though, we felt more like ourselves, our whole selves, being independent of and side-by-side with a child.

We decided to hike the Oberg Mountain Trail, an accessible route for people like us—people who rarely hike, who do not know how to plan for hiking, people who prior to encountering a trail were unaware that Minnesota even had anything actually referred to as a mountain. We’d tackled the short Oberg loop years before and still remembered fondly its gorgeous overlooks.

What we did not recall were the steep drop-offs or the narrowness of some stages or the rock tips that jutted from the trail and were now iced over and covered thinly in snow.

When we arrived at the trail entrance, having endured an extensively whiny fit, we realized that we’d only put the baby girl in sneakers rather than boots. We were determined to hike, though. We wanted it for ourselves, I suppose, not for her.

Still, we did what we could to keep her moving and to try to keep her shoes from getting covered in snow. We tried to get her to ignore her impulse to drop down into the snow, to rub it on her face, to eat it, to make angels in it.

Keep moving, baby girl. Please. Please keep moving.
But Freya took many breaks. She punched holes in the clean snow beside her as we walked. She nearly headed off on a downed and decaying timber in pursuit of a squirrel. She ignored the increasing grade of the path, was oblivious to the trail’s outer edge, and was perfectly happy to jump on chunks of ice.
Erin and I took turns walking with a saving hand alongside Freya while the other parent wandered ahead 100 feet or so at an adult pace, enjoying for a moment the freedom of movement. 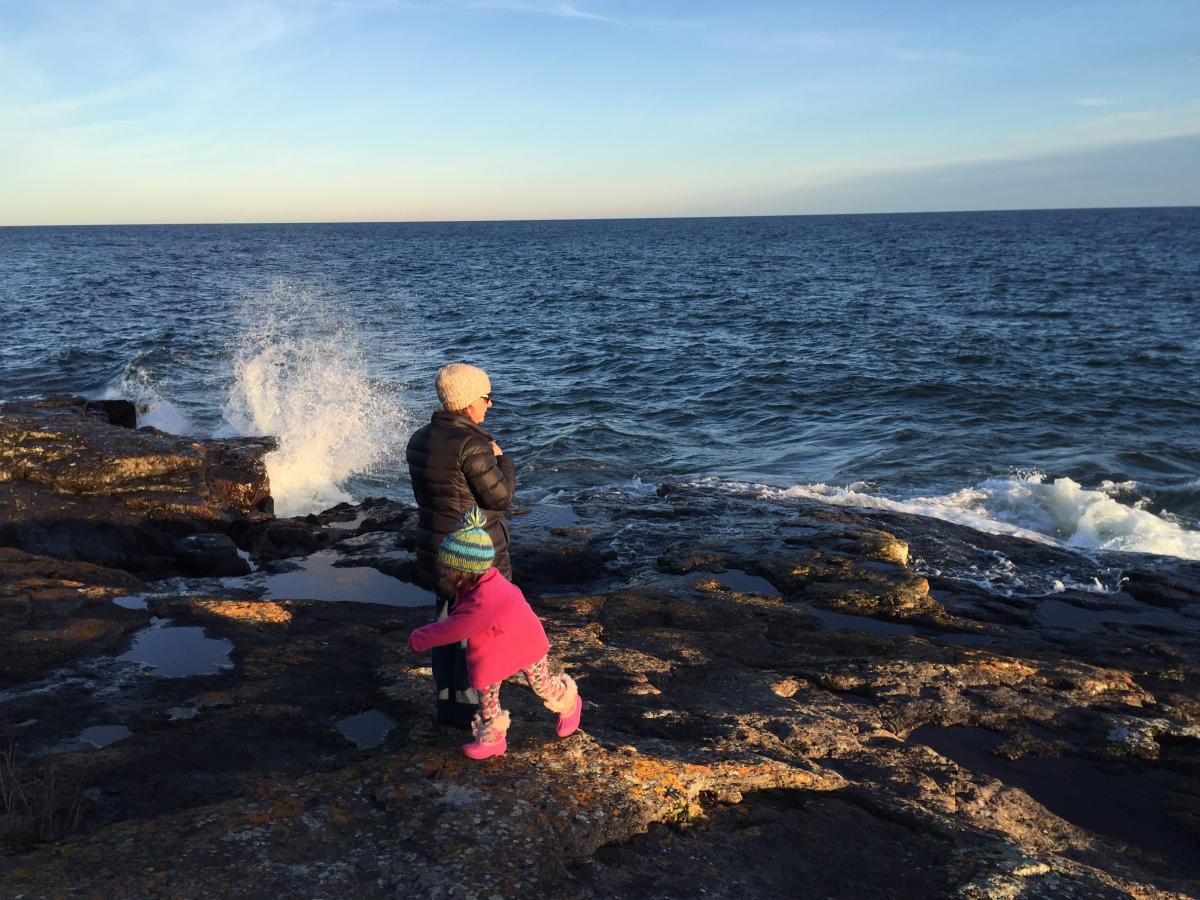 Eventually, we made a game of having Freya punch holes in the snow every so many feet, so we could “find our way back.” It was an effective tactic and allowed us to establish a sort of rhythm. Ten minutes grew to 30, then 45. We didn’t accomplish the full loop (which was less than three miles), and we did not quite reach the more extraordinary overlooks we remembered; but we covered a fair distance during what turned out to be a 90-minute hike. Our noses were red and our gloves felt inadequate, but we had achieved a sort of adventure together, simple as it was, and it was one which we hadn’t thought was in reach for us at this time of our lives.

Later, we spent time on the rocky shore outside our rental. Freya spent her time hopping over lake-sprayed puddles in the rocks, and more than a few times we cautioned her about tripping and falling, with the implication being that she might get swallowed up by Superior.
These were silly, kneejerk things to keep saying to her, though, and we knew it. Here she was at four just happy to be beside us. Here she was punching snow and stomping puddles and taunting waves for not being able to reach her where she stood. She engaged everything. She, like the water, was always in motion. That was her way of being up north. 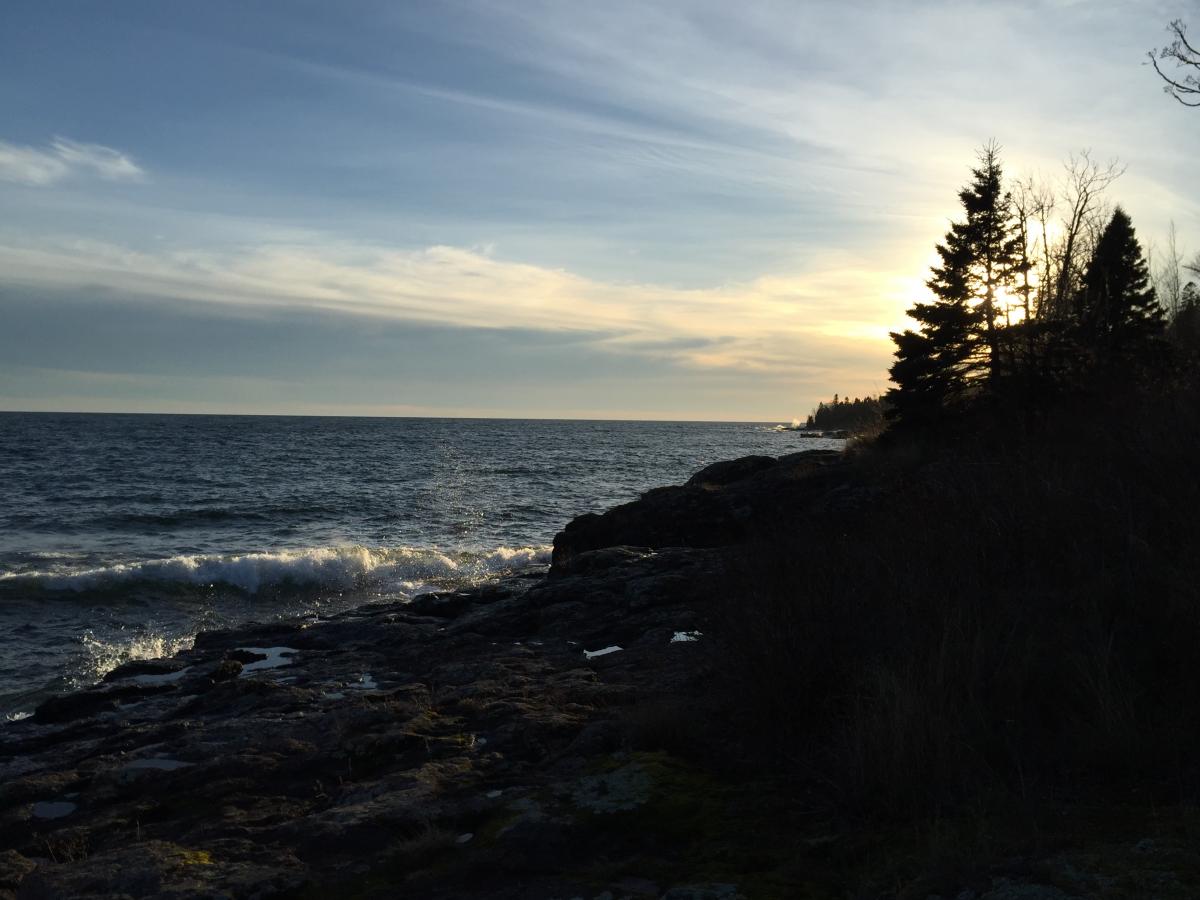 My and Erin’s way was just as likely to cause our daughter anxiety. We stared at the water, at its gorgeous constancy, and engaged nothing except the occasional sip of wine. The waves swelled 10 to 15 feet. They struck cracks in the shore and shot 30-foot spouts.

If the sun could have held out longer, we would have stayed more in those winds and by that water. With each day, the place we were in receded and the state of simply being took over.

Chris Kelsey is a writer and editor in Saint Paul, Minnesota.