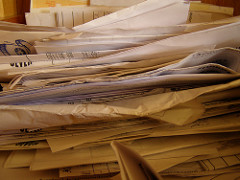 In your stained dishdasha, drooping collar, and sneakers with grimy laces, you stand waiting. You see him poring over a faded paper, its lines glowing red with numbers and scribbles. The paper yells: Overdue payment!

Staggered, the grocer asks, “When did you come?”

“A few minutes ago.”

“Well, now that you have, cough up your rent.”

He holds back his words, feigning calm. “We’re back to that again?”

You slam your fist on his table. His teacup shakes, the paper trembles, and the numbers, the packets of chewing gum, and the lighters jiggle around, while the bags of nuts look at you stupidly. This isn’t even your job. She should be the one running after these tenants. Lazy woman.

Angrily, you stress, “The rent is always due at the end of the month.”

Irritated, you cut him off. “I’ll be back in an hour, not a minute more.”

You leave the grocer’s, his sighs of exasperation ruffling the back of your neck. Heading to collect the rest of the rents, you look forward to the downtime between each apartment: no disturbance from car horns, no biting comments weighing you down, no sarcastic smiles. You cross the road, heading toward the building where the rest of the tenants are. Your destination: those denying doors. You know how much they shun you, but you are doggedly resolute.

The sound of your footsteps vibrates on the stairs. You arrive. Your fist pounds the shut door, but the door remains rigid in its silence, and the garish red Welcome sign shudders. Burning sobs burst forth from a baby, whose sound is buried by someone speaking in a strange accent, her phrases jumbled: “I don’t have the key … they’re out.”

You hear the servant scolding the infant, and you imagine the baby swaddled, his feet squirming, while she hugs her own silent feet close to her body, painting her toes red. You rap on the door again, but she doesn’t answer. You yell, “One day I’ll throw you out!”

You dillydally by looking at your shoes. You wipe their dusty tops with the corner of your dishdasha. You bang on the door with your open palm. The key coughs, choking in the lock. The door is now ajar, then it opens.

She looks at you with her wild hair, her voluptuous body, her slender waist, her sleepy eyes, her perky breasts. Nibbling on her red apple, she spits out a “Yes?” at you.

Disdainfully, she tosses her apple high; it sails over you and slams into the bottom of the garbage can beside you. You can barely conceal your admiration—what a shot! She turns and slams the door in your face. You scream: “One day I’ll throw you out!”

You circle the flat, closing in on the door and then walking away from it. You make a decision. You tap the point of your shoe on the ground, and, with one courageous finger, you rap on the shut door. It flings wide open to all-out yelling. Your voice shrinks; his enormous figure expands. You’re surprised by the way his bald head shines—and that he’s around today. His insolent wife, with her stuffed-up nose, is the one you usually run into. His shirt grates on you, its small squares spouting red.

He says nothing to you as he leans his bulk toward you. You brace yourself as he lunges toward your legs, and you shuffle back a step or two, inadvertently standing on the edge of a newspaper lying on the floor. He yanks it out from under you, yelling as he slams the door, “No news!”

You whisper, “One day, I’ll throw you both out.”

When you’re done, you return to the grocer and find that he has a cold juice waiting for you. In his hand, you notice the numbers and the red scrawl burying themselves into the paper, disappearing into a line at the edge of the whiteness. He says, “You’re late.”

“It’s not your fault.” He goes on to ask, “Did you fall out with your servant?”

You look closely at him, then ask, “How did you know?”

“He came here looking for you, in his scruffy clothes. I didn’t tell him where you were. Will you give me a break on this month’s rent?”

“Here, take this, clean yourself up.”

You take another gulp of juice and wipe your sweating brow and your mouth with his white handkerchief. You say, “You can stay.” You go outside to sit on the stoop, and you see the third tenant drawing close. He looks at you, disgusted; he bellows in your face. “Get up! Get out of here, and if I see you again,” pointing to his leg and his wrist, “I’ll cut your arms and legs off!”

You jump up and scramble away with your legs while you still have them, groping for your hand, remembering how you repeatedly interrupted your stepmom as she counted the rents collected this morning, her dirty red shoes thrown in your face. You kicked the table, scattering the money everywhere, then wriggled out of the servant’s grip. You punched him in the face and escaped, running out the door to the grocer’s, her voice hissing at your back, “Imbeccccile, one day I’ll throw you out!”

Estabraq Ahmad holds a law degree from Kuwait University and is a graduate of the University of Iowa International Writing Program. Her short story collections include The Darkness of the Light, for which she won the Laila al-Othman Prize; Throwing Winter High, for which she was won a state encouragement award; The Things Standing in Room 9; and Give Me 9 Words. She is the producer of the radio show The Cultural Café.

Sawad Hussain is an Arabic translator and litterateur who holds a master of arts in modern Arabic literature from the School of Oriental and African Studies. She is passionate about all things related to Arab culture, history, and literature. She is currently translating a Jordanian sci-fi novel due for release in early 2017.