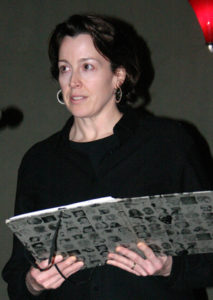 Jacquelyn Pope is the author of the poetry collection Watermark (Marsh Hawk Press, 2005). Her next book, Hungerpots—translations of the Dutch poet Hester Knibbe—is due out in October from Eyewear Publishing in the UK. Jacquelyn is the recipient of a 2015 National Endowment of the Arts Translation Fellowship and a PEN/Heim Translation Fund grant. She has received awards from the Academy of American Poets and the Massachusetts Cultural Council.

Marni and Jackye could have talked forever about the culture of language, humanity’s relationship to nature, and what it means to view the world from “up high”—like from a memorable pine tree in Jackye’s former home of South Carolina.

Marni Berger (MB): In your poem “Some Proof of Love,” which appears in Issue 09 of The Common, time is personified. The poem begins, “Dear little day later.” How does poetry allow you to explore time in ways that other forms don’t?
Jacquelyn Pope (JP): I am fairly obsessed with the subject of time. I’ve never been able to express the layering, or fracturing, of perspectives and periods of time in prose to my liking—something about the constraints and compression of poetry lends itself more easily to that. It’s something I keep consciously returning to in prose, whereas in poems it seems to insert itself, before I am fully aware of it.

MB: By the end of the third stanza of “Some Proof of Love,” when the narrator describes looking back, time is still personified, and more concrete: “Squint / just right and you can see the past: / the one who held your hands […].” Was this poem inspired by a person in your life?

JP: The poem was initially inspired by a young girl who lives across the street, whose mother killed herself when the girl was three. She and her older sister were left a little bit to their own devices after that, except for the intermittent intervention of neighbors, though of course there’s nothing you can do to compensate in any way for a loss like that. Sometimes they seemed more uncomfortable in the presence of other adults.

I would sometimes see the younger girl running down the street to school, and it reminded me so much of her mother, who I almost always saw running, because she was always running late—an awful image in light of what happened.

And, as [the girl] grew older she came to physically resemble her mother more and more. So I started from there and was thinking also of mother/daughter love and bonds, how such intimacy can be powerfully positive but can also hurt you terribly.

MB: Do you know if the young girl has read the poem?

MB: You write original poems, and you are a translator. What draws you to translation work?

JP: When I lived in the Netherlands I became a commercial translator, and that could be so rote and bloodless that I began playing around with literary translation just as a palate cleanser. Once I left the Netherlands I had few opportunities, of course, to use my hard-won language skills, so I started translating poems as a way of using my Dutch, and because I thought, and still think, it exercises poetry muscles that might not otherwise be used. 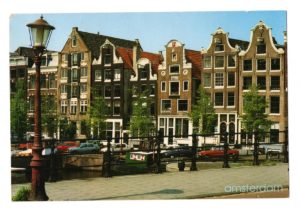 “This is a postcard image of the canal where I lived in Amsterdam. My house is the third from the right. If you look closely you can just see my former mother-in-law’s arm reaching toward the windowboxes in the second story windows. ‘Kromme Waal’ is the name of the street.” —Jacquelyn Pope

JP: I suppose I mean that a change of perspective is always beneficial, even if you’re not aware of it right away. It’s good to know people who aren’t like you, and it’s good to read poems and stories that were created in other languages, because language shapes our perceptions to such a huge extent.

When you’re translating poems, you have to make finely determined choices, [which] means considering your own language more closely than you usually might; or you have to come up with a substitution that works because there is no cultural context for the source text’s word or phrase. As a construction, it all has to fit together pretty tightly, and I think, unless you’re composing formal verse, those considerations aren’t usually a factor in composing poems. It causes you to recognize and consider your own stylistic decisions.

There is also, if you spend a lot of time translating the work of a single author, the kind of strange aspect of being inside someone else’s head, occupying their imagination just that little bit.

MB: Can you give an example of when you learned about a cultural concept while wrestling with words for a translation project?

JP: Very recently I encountered a phrase that led to the discovery that the breaking of a glass object has traditionally been taken as a sign of good luck in the Netherlands. We don’t have that belief; the closest thing I knew was the Jewish tradition of smashing a wineglass at weddings, but [in the Netherlands] this isn’t tied to occasion or ceremony.

There are larger questions too, prompted by the relative expansiveness of English and the difference involved in coming from an extremely heterogeneous culture and trying to understand and work around the perspectives generated from what was, until recently, quite a homogenous culture. The Dutch language has some incredibly clunky words for identifying immigrants and their descendants, used almost exclusively for people of color.

There is so much to be gained from wrestling with foreign words and sentence structure, and discovering the cultural concepts behind the words. Even the attempt is important, especially now when so much in our culture says words don’t matter, hurry up, just put something down.

MB: Do you think the need for speed is primarily a reflection of the cultural values within the States, or elsewhere too?

JP: I think it’s particularly acute here [in the States]; we’ve never prized slowness or deliberation; and speed, multitasking, and availability are positively fetishized now. We have to keep up, because we don’t have the job and social protections that have existed in other Western countries, though it’s changing all around the world.

MB: Where did you grow up? How have these places dictated your approach to the work you translate?

JP: I grew up in many different places. My dad worked for General Electric for most of his career, so each promotion meant a move. I lived in Massachusetts, Washington, California, South Carolina, Pennsylvania, and Minnesota with my family, then they kept moving and so did I. Also my father was from Hawaii so we were fortunate enough to visit family there often, though alas never lived there.

I continued to move around in my 20s and 30s, so I can’t really think in terms of one place, but that definitely led to the development of an outsider’s perspective, and I know I am drawn to that in turn. Then again, literature is written by outsiders.

I’ve always had a longing for home, for a place that seemed like home, and more specifically a longing for the landscape of Northern California, where I lived as a young child. When I lived in Holland, I wrote about the American South. When I moved back to the U.S., I wrote about Amsterdam.

Where I live now, there is hardly any nature left at all, so I am obsessed with trees and weeds and birds of prey.

When my daughter was very small, I saw how she made the trees and creek and paths we walked into magical places, but there is nothing like that here. I hope she’ll retain a memory of nature, however slight it might be—I think we all need it.

Right now, yet another tree is being sawed down. It makes me wild with sorrow and anger. We are so blithely bent on destruction.

MB: Why do you think we all need nature?

JP: Because we’re animals, although we are loathe to admit it.

I think we all need access to an outside that contains at least a remnant of the wild. We need reminders that we share this planet with so much other life—and we ought to be disabused of our conviction that we are the only beings that matter.

I rely on some of my memories of places and phenomena for solace. It is good to remember that there are places in the U.S. where waterfalls outnumber water parks, for instance. To know there are unpaved places out there is calming. 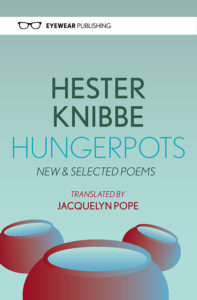 MB: Hungerpots—your book of translations of the Dutch poet Hester Knibbe—will be published in October. What attracted you to her work?

JP: Initially, I liked the matter-of-fact tone of her poems, their simple form and language, where there were surprises—sometimes gruesome ones. And she does things I would never do, like making a stone be a poem’s speaker. For a while the sheer weirdness of the poems kept me going.

The natural world is very alive in her poems, but in a way that is very different from what we might expect in the U.S., since we still have some wilderness left—her landscapes are often ancient human sites, like Pompeii, and they seem alive with the very burden of human history in them. You can’t take a step or a breath without walking on or inhaling the remains of history. That kind of haunting is very magical to me.

MB: “Bone Almanac,” the second of your poems that appears in Issue 09 of The Common, ends with: “the horizon fallen away on all sides: / flattened, widened, extended unto vanishing.” Space is important in your poems, and in this case, readers are left with the vertigo of sudden nothingness. Are there physical spaces in your life that have inspired those that exist in your poetry?

JP: Yes, definitely. That poem is a bit peculiar; it began from a room in Amsterdam and then made its way outside to a pine tree in South Carolina.

I like perching up high, even if “up high” is only up a flight of stairs. I like that perspective. 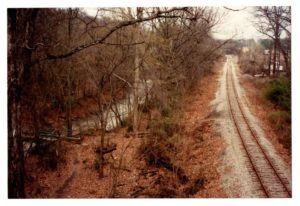 “There’s a photo I took of a prosaic but to me archetypal Southern scene—a combination of creek and railway line always appeals to me. It was taken propped in a tree.” —Jacquelyn Pope

Jacquelyn Pope’s poems “Bone Almanac” and “Some Proof of Love” appear in Issue 09, and her poem “Survivor” appears in Issue 02, of The Common.