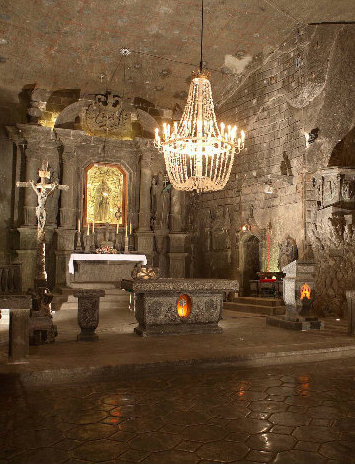 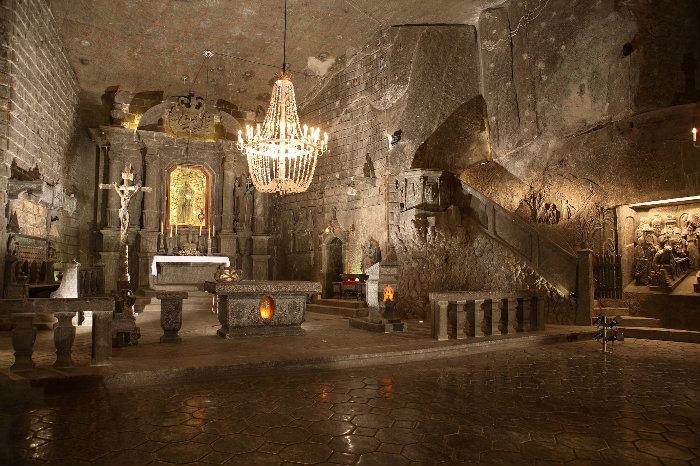 Underground, you expected a loamy smell. Instead you inhale a dry, metallic breeze. The English-speaking Polish guide tells your tour group that the mine’s temperature holds at 57ºF despite the 80º May day above in Krakow. You zip up your jacket before you descend the stairs cut out of salt.

At the bottom, a tunnel darkens with so many people clustered ahead. People behind you keep shuffling forward, bumping into your back. The rest of the group in front of you has nearly stopped moving. There are no EXIT signs. The only way out is through. The air becomes used in the small, close space. You tiptoe and peer over shoulders. A hazy glow curves above the bottleneckers.

When you begin to pass through the archway, you stop like everyone else and stare at a cathedral carved out of salt. Electric candles strung from the ceiling make everything glimmer golden: rows upon rows of pews, columns that connect the floor and ceiling like stalagmites and stalactites meeting in the middle, a chandelier of twinkling crystals, and an altar with a cross set on its middle. A statue of Pope John Paul II frozen in time and salt doesn’t seem tacky but rather humble.

Down in the aisles the guide says this room is the Chapel of St. Anthony—the saint of lost things—one of several fully functional chapels in the mine. The first mass was held for miners in 1698. And people get married here today.

The guide ushers your group along, funneling you into a side passage. In a production room, she says the mine still harvested salt as a commercial operation for tables across Poland as recently as last year. A story-tall wooden screw—the threads smoothed from centuries of drilling into the earth and churning up salt—leans against the corner. Glittery salt-crystals dust the top of winches. The pulley systems are made from wood, too, and loops of rope, instead of metal chains that would rust hauling up the loads.

Instead of going back into the chapel, the guide takes your group into another room where bulbs the color of sunset shine down. Someone says how beautiful it looks. The guide laughs and then says that if there weren’t colored light, the salt would naturally look a dull gray. The bulbs in the chapel must have been tinged yellow to give a heavenly glow.

You continue to follow the mine’s descent. The path swirls down and then finally comes to a landing without any tunnel or passageway or stairs at the other side. Next to the walkway a basin rises up to your chest. The air thins. When you swallow, your tongue dries.

A hushed rushing trickles, sliding down the slick walls of the basin collecting everyone together here. The guide says the basin holds a lake of runoff. If you swam in the water, you would float on top like the Dead Sea.

The guide reveals a mineshaft elevator to take you to the surface. You are a grain of salt. Your group is a dash. The elevator is a shaker heaped with tourists ready to pour out.

Chris Wiewiora spent his childhood in Poland where his parents served as Evangelical missionaries under the “Iron Curtain.” Chris’ writing has been anthologized in Best Food Writing 2013 and also published in Edible Iowa River Valley, Gastronomica, Graze, and many other magazines. Read more at www.chriswiewiora.com.