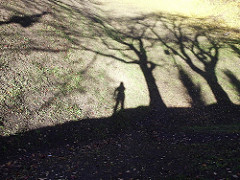 Both a painting and a tableau I conceptualized in
a feature film led to this poem, to which I connect
-ed the cover photography of selected jazz albums
and paintings by George Catlin. Colonel Guy
Johnson and Karonghyontye (Captain David Hill)
(1776) is the work of Benjamin West, an eigh-
teenth-century painter born in the Pennsylvania
colony. Better known is his William Penn’s Treaty
with the Indians (1771); but I suspect the directors
of the Daniel Day-Lewis Last of the Mohicans used
it to create the film’s opening scene, where Magua
(played by Wes Studi) steps out of the shadows.

Fearsome projects its awful deception,
Making carrion of the English mind.
Ben West paints his Colonel Guy Johnson,
Face with bulb soft white above bi-continental dress
Honoring Uncle Willie’s memory.
Is Brant the deep shadow animated?
Does he suggest peace gesturing toward his pipe?
Do the English see his pride to misread him?
When he comes home won’t he remain in shadows?
The hour of the figure is short,
The shadow a great margin around Colonel Guy,
The guy assuming center stage on Turtle Island;
Brant’s villages dim cultures in the distance.
Movie Magua inherits the shadow perimeter,
The deepest shade of influence on the officer.
Anglo minds await his treachery.
These principals in war dances of art and film;
This squared circle unwitting Karonghyontye
Incepted to Johnson locked in his colony
By Benjamin West,
Bicentennially disclosed and inscripted
for Wes Studi to abide in shadows,
For me, from Tsalagis’ eastern Wests
To live here to remind you.
Huron, opaque tin chiaroscuro of candlelight and
Heathen fire, stands against the wall calculating his advent.
Step with me now!
There is something of Lee Friedlander’s photo covers,
Atlantic Records late fifties:
The Blues & Roots Mingus;
The obscure light playing off Trane’s blazer
Beneath Giant Steps;
The indigo and pastel brass on Fathead;
Bags and Ray Charles.
Every image suggesting cigarettes and livingrooms
And bottles of beer.
Poses calculating their shadows.
Listeners at the perimeter of the Trails.
Cooper anoints his Huron for blood.
He has read the record of history about the people of
The eastern door and so named Huron to venom,
Maddened to slaughter the regiment leaving Fort Henry.
Huron is not just leading men there.
He is Black Hawk as elder out on the prairie.
He is Catlin’s The Cheyenne, a black hand of close death
Sweeping across his Pawnee mouth.
He is solid and well built,
His neck and chest thick and strong.
Wes Studi lives in him too,
Scripted anger at the Sioux and
the careless whiteman’s telling fires.
Bull Buffalo regards Catlin now,
That man with many paints;
Glimpsing the future with arrow poised,
He wonders about the images coming next,
And about the shadows taking on life and
The peripheries assigned for our objections.
He wonders, this Buffalo Bull,
What you and I will do down the years
When our hearts must look his way and at Colonel Guy,
The guy who should listen more to his Brant,
Who should listen more to his belts
Taken over into shadows
Of the foolish with unrectified truths.

Ron Welburn (Gingaskin Cherokee and Assateague descendant) has published in over one hundred literary magazines and anthologies, such as volumes I and II of Susan Deer Cloud’s I Was Indian compilations, Yellow Medicine Review, Callaloo, and The Best American Poetry 1996. His seventh collection of poems, Council Decisions: Revised and Expanded Edition, was published by Bowman Books of the Greenfield Review Press. A professor in the English department at the University of Massachusetts Amherst, he formerly directed the American Studies graduate concentration and also coestablished the Certificate Program in Native American Indian Studies in 1997.