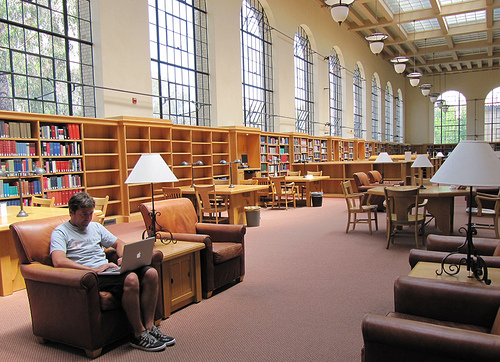 Sometimes I have to leave the house, get out in the world and write among other people.  Not that I want anything to do with any of them.  I just want to set up among them, the better to hunker down. I’m looking to be anonymous.  I’m looking for a place where I can concentrate on my characters while ignoring people.  A place where the rest of humanity provides a soothing backdrop, a therapeutic white noise.

I’ve written in plenty of Starbucks, the setting of my story “Meetings.”  But that’s only because I couldn’t get to a library.  Preferably a law library.  In a recent essay Zadie Smith praised libraries as an “indoor space in which you do not have to buy anything in order to stay.”  Yes, and even better for my purposes is a library in which you do not wish to read anything.  At home I can pick up the Smith essay or hundreds of other good things to read, so I often have to get away to where there is no such temptation.

Lucky for me, George Mason University’s law library is only a couple of blocks from my house in Arlington, Virginia.  I wrote much of my MFA thesis there.  I’d come home from work, eat dinner, and walk over.  There I was not tempted by the five-inch-thick Federal Practice and Procedure and I was not able to get on the Internet to read anything better.  No one talked; everyone worked; it was open till 11 pm.  My favorite spot was a table on the second floor.  Through the wall of windows I could see the smoke from the popular Peruvian chicken place across the street until it got too dark, and then just car lights, white lights approaching and red lights going away.

Inside was fluorescence, whispers, silence.  I allowed myself minor procrastination with the student newspaper, The Docket, keeping up with moot court competitions and recruitment days and advice columns from third years to first years.  “As much as you can, stay away from the library and the stressheads who live there.”

I decided it was fine to leave my stuff at the table when I had to go to the bathroom.  Everyone else did.  After all, these people were hoping to be members of the bar one day.  At places like Starbucks I’m sometimes asked (always by a woman) if I would mind watching her things while she visits the restroom.  No one does that in the law library.  Your things will be neither stolen nor protected.  No one is going to bother with you at all.

Then I went to Stanford on a Stegner fellowship.  I found a small apartment near campus but where was I going to go when I had to get out of there?  Someone in the creative writing program recommended the law library.  “They have those Aeron chairs.”  Otherwise it was the same set up as George Mason:  long tables, silent students bent to their work, bookshelves packed with massively boring tomes.  The late hours and the glass wall through which night fell, when red and white bike lights blinked outside among the eucalyptus.  Here, however, I could get on the Internet.  I allowed myself to check email after every new page of writing.  Maybe some friend back east was wondering how I was doing.

I picked my spot, one end or the other of the bank of tables at the rear of the first floor, depending on where I could have the greatest distance from other people.  Each of us and our little piles, our laptops and water bottles and jackets, and then an unoccupied buffer zone.  We were not in a shared space but, as Smith put it, “a plurality of individual spaces.”

I was working there one late afternoon a little more than a year ago when a carpet-muffled disturbance came from the other side of the rows of bookshelves, from the opposite side of the floor, by the front door.   Movement and “shh! SHH!” and the impression of people, activity.  Then a woman’s voice, clear and loud, “What do we say?” and a burst of children’s voices, “Trick or treat!”

I’d forgotten about Halloween.  The library was one of the places on campus that gave out candy to kids from the campus daycare programs.  I looked up, like everyone around me, processing this and silently grasping what was going on.  No one got up to see.  We smiled and made eye contact with people nearby and someone muttered “a-dorable” and someone else muttered “totally.”  We acknowledged each other all around.  You’d have been a jerk not to.  Then it was enough.  We all looked down and returned to work.  Though before I went back to ignoring people I checked email again, hoping someone had sent me a message.

Helen Hooper spent twenty-five years as an environmental lobbyist in Washington, D. C. before heading to California as a Stegner Fellow. Her fiction has appeared in The Hopkins Review, Bellevue Literary Review, New South, and elsewhere.