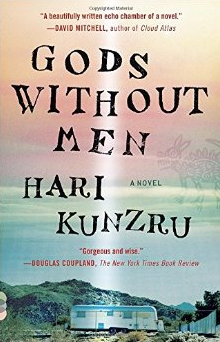 At the heart of Hari Kunzru’s fourth novel, Gods Without Men, is the disappearance of a child, Raj Matharu, four years old, the autistic son of wealthy New Yorkers Jaz, a Sikh, and his Jewish wife, Lisa. Raj was last seen in the shadow of the Pinnacles, “three columns of rock” in the Mojave desert in the American southwest.

If Gods Without Men is a whodunit, it is one in which the culprit may well be a place. The (fictional) Pinnacles have drawn three centuries of seekers—Spanish friars, believers in aliens,  washed-up British rock stars, hippies—all of whom believe they offer a connection to some vast presence. Over the course of this complex novel, these disparate narratives cast light on the mystery of what happened to Raj, how, and why.

Kunzru is a New Yorker, British, product of Kashmiri and English parents. His work is often characterized as postmodern satire. However, the book is more than an “outsider” tour of whacky American subcultures in a frontier setting. It can be read as a “spiritual” frontier novel, which despite its sometimes satirical tone, empathizes with America’s history of wanderers in the desert.

Raj’s parents have arrived at the Pinnacles as part of a weary attempt at a “healing family vacation.” One moment, they look away and the next, Raj is gone from the shadow of the rocks, where they had sheltered him from the harsh midday sun.

Each parent takes the disappearance as some kind of cosmic punishment. Lisa, who gave up her career to take care of Raj, has tried to cultivate “a hopeful habit of mind” reading texts about “positive visualization…in a semi-clandestine way, like an Eastern Bloc dissident.” Yet, on one night of the vacation, she abandoned her husband and son for a night of drunken infidelity. Jaz, high-achieving son of Sikh immigrants, has severed most ties with his family and culture. His job as a Wall Street quantitative analyst takes him away from the stresses of child-rearing that overwhelm his wife. Left to take care of Raj the night Lisa goes off, he fantasizes about freedom from his son’s demands. Is the disappearance a response to these subconscious wishes?

Gods Without Men explores culpability and motive—human and as the title suggests, divine— at many levels. Cy Bachman, Jaz’s compelling and enigmatic boss, provides at one point what seems like a statement of the novel’s approach to cause and effect:

For a Kabbalist, the world is made of signs. That’s not some postmodern metaphor – it’s meant literally. The Torah existed before the creationof the world, and all creation emanates from its mystical letters. Of course the modern world is terribly broken. Its perfection has been dispersed…

Bachman is also creator of Walter, a powerful computer program, with which Jaz works. Walter ostensibly forecasts and trades on financial market movements by synthesizing streams of seemingly unrelated data: “CPU transistor counts since 1960, IQ test scores for African American boys from single parent families and an epidemiological analysis of the spread of the methamphetamine drug ya-ba through Thailand and South-East Asia.” Jaz begins to suspect that Walter produces the outcomes it purportedly predicts.

With its voracious appetite for data and association, the program mirrors the novel: “Finding connections between… phenomena… reading those signs, doing our part to restore what was shattered.”

Several months later, Raj is found unharmed, by an Iraqi teenager on a Marine base not far from where he was lost. Lisa embraces the miracle through a return to her spiritual roots, while Jaz finds himself adrift in suspicion, obsessively dissecting the re-appearance.

The novel scatters clues to the mystery of this deliverance in the stories of other visitors to the Pinnacles. Some mirror the themes of guilt and punishment in the Matharu family’s story, while others hint at a forensic connection. British rock star Nick Capaldi, staying at the same seedy motel as Jaz and Lisa, for example, gets tagged as a “person of interest” during the investigation.

Implicated in the events but“not in any way you could explain to a cop or a reporter,” is Dawn, ex-New Age cult member and motel owner. At once believer and skeptic, she embodies the opposites the novel is interested in. We first meet Dawn as a teenager entering the hippie commune that assembles in the shadow of the Pinnacles in 1969. She links the Raj/Jaz/Lisa narrative with the novel’s second significant storyline, the history of a cult—the “terrestrial hub” of the “Ashtar Galactic Command” from 1947 to 1971—which is told from three points of view.

In contrast to the Matharus’ story, the Galactic Command narrative has a satirical edge. In 1947, a former aircraft mechanic Schmidt sets up at the Pinnacles and sends out an elaborate invitation in Morse code to “extraterrestrial intelligences.” He is rewarded by the vision of a spacecraft, “disk-shaped, featureless but for a ring of iridescent lights around the rim, like gem stones or feline eyes” from which alight two rather familiar figures:

Their skin was so pale as to be almost translucent, and in each of their noble faces was set a pair of remarkable gray eyes, animated with profound compassion and intelligence. The pair were dressed in simple white robes, belted at the waist with bright metallic chains.

Ten years later, a young single mother named Joanie drives to the Pinnacles to attend a convention of the Galactic Command Welcoming Committee. In the melee, she loses her daughter Judy. In 1969, we learn from Dawn that a teenage Judy has been miraculously restored to her mother when the “saucer people” trickled back to form an informal commune.

Other story fragments in and around the Pinnacles, reaching back three centuries, echo the questions of guilt and expiation, penalty and atonement that frame the Matharu narrative:  An eighteenth-century Spanish missionary lost near the Pinnacles received a vision, and in 1871, a Mormon gold-digger saw strange men alight from the sky.

Another recurring character who personifies the dialectical forces of this universe is Coyote, the dog-headed Trickster of Native American myth who sets the tone for the novel in the prologue. A character called Coyote shows up in the 1969 commune. He reappears with Judy, now middle-aged, at the Pinnacles in 2008, right in the thick of things. Judy longs for children; Coyote, reincarnated as a meth cook, with his sinister gadgetry and urge to “mess with stuff, connect things together,” his “rage for transformation” may have set up camp near the Pinnacles. Could he have had something to do with Raj’s loss and return?

Gods Without Men doesn’t wrap up this trail of tantalizing details. The novel refuses closure, allowing several understandings of the events around the Pinnacles. This lack of resolution and the profusion of narratives can be frustrating, not to mention difficult to summarize. Gods Without Men starts slow and some early characters, like Nick Capaldi, never seem organic to the novel’s themes. The pop culture references in the early cult sections, especially those told from the points of view of Schmidt and Joanie, seemed cliché and overdone.

Gods Without Men brings together and expands on other themes of Kunzru’s past novels. It’s about identity and race, assimilation and resistance to it. In its historical sweep, it evokes The Impressionist, set in colonial India, which followed the career and changing identities of the title character. Its focus on the globalized present brings it closer to Transmission, which was about the causes and consequences of a twenty-first century computer virus, while the richness of character is reminiscent of the first-person psychological realism of My Revolutions, whichvisited the past of an aging 1960s radical.

Flannery O’Connor, archetypal Southern writer and master of compact narrative, may appear an unlikely reference for Gods Without Men, with its hard-to-summarize structure and multiple plot lines. But like O’Connor, Kunzru is fascinated by the mystery of faith. And for all its digressions, the novel, for me, is faithful to O’Connor’s dictum: “[A] story is a way to say something that can’t be said any other way…”

A.J. Sood attended the creative writing program at the University of California-Davis, and received fellowships to attend the Indiana University Writers Conference and the New York State Summer Writers Institute. Her work has appeared in 21 under 40, Sarai Reader 07 and has been nominated for Best New American Voices.