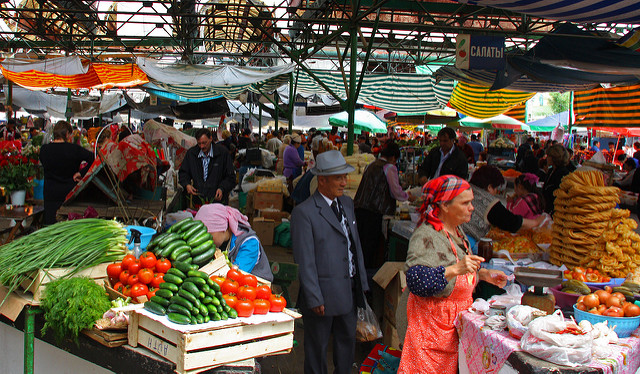 My husband’s nemesis is a taxi driver who is always parked at the end of our block. He has a luxury vehicle, an old Mercedes, which looks out of place on these long-neglected, pocky streets. To my knowledge, he’s never given anyone a ride. Ethan gets into arguments with him about the cost of a trip when we’re in a desperate hurry. It always ends the same: we look for someone else. From what I can observe, the driver has a Sonic-the-Hedgehog knockoff on his iPad knockoff and he won’t stop playing unless offered a ridiculous amount of money. He’s the Linda Evangelista of taxi drivers in Kyrgyzstan.

To be clear: “ridiculous amount” is relative. The arguments he and Ethan have are over two or three dollars. Ethan has lived in Bishkek, Kyrgyzstan, on and off for several years. He’s fluent in Russian. He knows how much a taxi should cost, knows how far away we’re going, and doesn’t like being played for a sucker. It’s the principle. What we usually do—the technology here has moved in funky ways—is use an Uber-like service where we open an app, request a cab, and it shows up to our pinpointed location. That cab will be metered, and it’s always the best rate. It’s only when those cabs are in high demand or the internet isn’t working that we have to resort to you-know-who.

I don’t know if he’s trying to hose us—he’s definitely noticed I don’t speak Russian, and I don’t look local—or if he simply likes playing almost-Sonic. Maybe he just wants to get out of his gray box of an apartment for a while. I don’t know. I’m often an oblivious, sometimes frustrated, bystander. Kind of like the time I unsuccessfully queued for the bathroom at the Bishkek Ballet, missing several opportunities to take my turn because I didn’t understand that lines aren’t really a thing here. It’s not that I’m necessarily being taken advantage of, it’s that I don’t know how to say, “It’s my turn.”

The first time I visited Kyrgyzstan was two summers ago. I learned a few key phrases—How much does this cost? Do you speak English? I don’t understand.—but I only retained a few words, like спасибо (thank you)and мой муж (my husband). That first visit, we were recently engaged, and I was so enamored with practicing a future-truth, мой муж, it stuck. I also learned я люблю тебя/ya lyublyu tebya (I love you), though I pronounce it more like “yellow, blue, tib-blah.”  Back then, while horseback riding up a steep rocky mountain pass to a yurt for the night, I said flippantly, “I could live here.” (We already knew мой муж would need to spend a year here to complete his PhD program.) I didn’t anticipate that I’d actually follow through with it.

A year later we got married, and Ethan’s departure became imminent. We didn’t want to be apart immediately after our wedding, so my leave also began to take shape. It wasn’t an easy decision. I had an amazing job that I was good at, a community, a life I had carved. But the draw of adventure with my partner was strong, and I knew I would go.

I left my life in Texas and have been in Bishkek for about six months. Despite lessons, my vocabulary arsenal has not improved as much as it should, and, in some cases, it has regressed. I realized recently I have been forgetting to put on the “тебя/you” to the “я люблю/I love.” I’ve been walking around saying “yellow, blue, yellow, blue,”  I love, I love. To Ethan: I love! At coffeeshops, regarding iced lattes:I love! I got so used to the mnemonic device for the first part that I forgot about the object of the affection.

My language limitations aren’t debilitating because often I’m accompanied by a skilled translator. Ethan’s research is somewhat flexible, so we’re together a lot. My Russian lessons atrophy the second we go out together, due to my own fear that I’ll say the wrong thing—once, at a restaurant, I accidentally requested “no bitch” instead of “no sugar.” Another time, I tried to place a food order in Russian but it too me so long that the waitress walked away. So, I usually let Ethan do the talking.

When I run errands by myself it’s a different story. The maze of bazaar vendors can be aggressive. Under dirty tarps, they push forward samples of nuts and dried fruits.Mmm, I love (almonds). But, I don’t know how to say I don’t like something. Instead, I sayI don’t love. I don’t love (pistachios). I love (eggs). (I have become a pro at asking for 10 eggs, a Kyrgyz-dozen.) I don’t love (that meat). (But, only because I’m not sure if it’s horse meat, which objectively, to omnivores, tastes really good, but once I found out what I was eating I couldn’t be objective).

I don’t love the fact that people smoke in restaurants. I don’t love that every coffeeshop has the same loop of Russian muzak covers, including, but not limited to, “Wrecking Ball,” “Bitch Better Have My Money,” and “I Kissed A Girl.” I don’t love that our power occasionally goes out, sometimes for up to 30 hours, and no one knows when it’ll come back on beyond “soon.” I definitely didn’t love learning the hard way that the hot water, which the city of Bishkek heats centrally and provides cheaply, is turned off for a month each year. But, I don’t hate any of this either. It’s hard to be a hater when you don’t have the language for it.

I do love Kyrgyzstan. I love the mystery and complications of understanding only some of what’s going on. Even when it’s frustrating: I love. I love the jagged sweep of the Tian Shan mountains along the southern horizon. On clear days, the sight of their green foothills and snowcapped peaks against the imposing, Socialist Classicist buildings stops me in my tracks. I love Босо лагман, a regional noodle dish that can be so spicy my nose runs. I love, finally, being able to read the Cyrillic street names. I love knowing which market is the most likely to have fresh basil in the winter. I love the life we’ve carved out here. I love knowing that every day the cranky cab driver will be parked at the end of our street; in a city of over 850,000 people, it’s comforting to see a familiar, if not particularly friendly, face.

Steph Opitz is the books reviewer for Marie Claire magazine and development associate for the Association of Writers and Writing Programs.