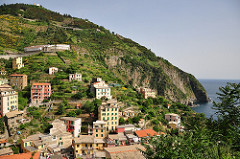 By the shadowless, lion-bluff of Pigeon
Island, you have gone swimming, a clear
afternoon, children’s faint play noise ring
in the yard, a hyphened church school near
century old cafés, their serial zinc titles in comic
icons: ICE CREAM AND OTHER SUPPLIES,
scythed your sides with laughter, but they vanish
near the beach stretch the piratical hoteliers’
paradise, a white army of luxury boats idled,
processional, waiting for a flare to blow,
to ignite another plantation without Bible
or chain, just the PM’s handshake and bow.
You ignore the scene for your first immersion.
The blue water whitens and collects you
in its salt mine, you become absent, gone
where the deepest without light renew
their earth vow, to return, so you reemerge.

Aw, viejo, so this is the chessboard you wrote
delicately about, an emerald, patient army
poised for your command, a voice without
force to crack the terra-cotta quiet, steadily
erect between two flailing lives; memory
and this, the present, advancing only down,
the body’s tower rattled by what is carried:
diabetes and your gift, the mighty, unscathed morne.
We will not mourn at the bishop’s speech
that day, not when he crosses himself twice, an X;
we will be as the breakers on the beach
at Cas-en-Bas, mute with rage, serenely vexed
your life cannot be repeated, a chess game
played in the shade, with other shades, companions
literature, not language, has made the same—
almost—each aware of the others’ ignorance,
poets and pawns, warriors, shifting in time.