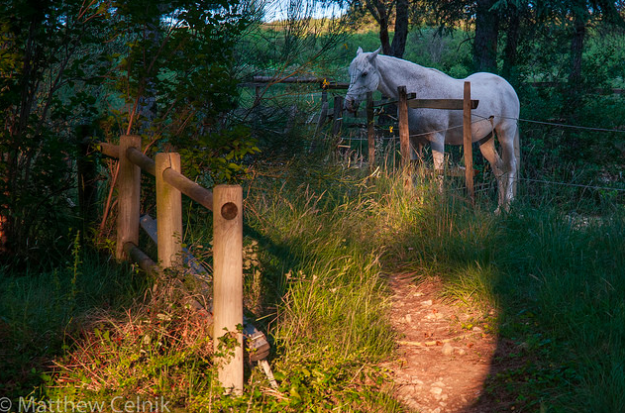 The white horse at the railing stood alone, saddled and loose with no rider on his back. I searched for a person in charge, someone holding the reins and hidden from view behind the horse, but the gelding in the outdoor riding arena faced the morning clouds by himself.

I bolted for the arena once I spotted the rider, a woman in her thirties, slumped and curled on the dirt as if she were asleep. Are you okay was enough to wake her up, the look in her green eyes shock at being on the ground instead of in the saddle. Her helmet was frosted with sand.

The horse had debris on his side, too, suggesting they’d fallen together. He’s not a bad horse, the rider said. She stood and brushed off the sand along with my offer to take her to the emergency room, steadying herself and reaching for the horse with her eyes.

I led the white gelding around the arena at a trot so the rider could see if he was okay, buying time for her to reconsider. Although the horse looked fine, I wasn’t sure about the rider. I’d fallen from a horse years ago, a swift descent erased from my mind as if it’d never happened. The most I pieced together from broken memory was a nervous horse, packed dirt, and the helmet I’d decided not to wear that evening.

Guess I won’t be riding long today, the woman laughed, a good sign, though all I could think was that she shouldn’t ride at all. I searched for words to convince her otherwise, mumbling about my own fall and football players who get “dinged” during play–how each one leaves the field on the arm of a careful medic. The woman gave me a look that said I didn’t know her well enough and could no more make her visit the doctor than I could compel the white horse to tell us what made him stumble.

When the woman mounted, I turned away, unwilling to watch her circle the arena with her head in the last of the fog, even at a walk. Back at the barn I shoved the broom, its handle covered in duct tape, over bits of hoof that the farrier left for the dogs to chew, a clear walkway the one thing I could influence.

I was so busy sweeping, I almost missed the white horse walking past the doorway open wide as the future. He stepped over dormant grass and took his rider, who probably thought she was navigating, back to her own stable. Over swishes of broom, the horses chewed their hay in steady rhythm, the clean aisle warmed by their breath.

Gail Folkins, writer and English instructor, often writes about her deep roots in the American West. Light in the Trees, a nature-themed memoir set in the Pacific Northwest and her second book, is now available from Texas Tech University Press.